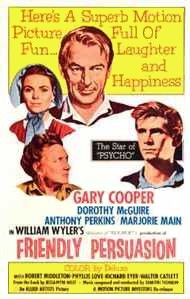 "Friendly Persuasion" is a 1956 -winning Civil War starring , , , , and . The screenplay was adapted by Michael Wilson from the 1945 novel "" by Jessamyn West, and was directed by . The film was originally released with no screenwriting credit because Wilson was on the . His credit was restored in 1996.

The film tells the story of a pacifist family in southern during the .

The protagonist of the story is Jess Birdwell (Gary Cooper) the patriarch of the Birdwell family whose worldliness is forever coming in conflict with his being a Quaker. Jess's wife Eliza (Dorothy McGuire) is a deeply religious woman and is steadfast in her refusal to engage in violence of any sort. Jess's daughter Maddie (Phyllis Love) wants to remain a Quaker but has fallen in love with a dashing officer (a love that horrifies her mother). Jess's youngest child "Little" Jess (Richard Eyer) is a feisty child whose comical feud with his mother's pet causes her nothing but heartache. Jess's eldest son Josh (Anthony Perkins) is a young man torn between his hate for violence and the knowledge that to protect his family he must join the military and fight the invaders.

We are introduced to the family via its youngest member "Little" Jess who is forever at war with his mother's pet goose. The film begins as an easygoing and humorous tale of Quakers trying to maintain their faith as they get ready and then go to Meeting on a Sunday. The mood of the film shifts dramatically when the meeting is interrupted by a Union officer who asks how the Quaker men can stand by when their houses will be looted and their families terrorized by the approaching Confederate army. He questions various young men specifically, doubting their courage and suggesting that they are hiding behind their religion out of fear. When directly confronted with the question of his being afraid to fight, Josh Birdwell responds honestly that it might be the case. His honesty provokes the wrath of Purdy, a Quaker elder who is quick to condemn people who don't believe as he does.

The film returns to comedy as the Quakers trying to maintain their ways but throughout the film the audience is always reminded that the Confederate army is drawing closer every day. When the Confederate army finally arrives the film turns deadly serious. Jess is shown cultivating his fields when he notices an immense cloud of smoke on the horizon; the kind that can only be produced by the burning of a city. Josh soon arrives and tells them the entire neighboring community has been reduced to a land of ash and corpses. Josh believes that he must fight, a conviction that threatens to destroy the family. Eliza tells him that by turning his back to their religion he's turning his back on her, but Jess sees things a different way, explaining to her: "A man's life ain't worth a hill of beans except he lives up to his own conscience."

With the story's endgame at hand each member of the family is forced in their own way to confront the question of whether or not it is ever right for a Christian to engage in violence.

"Friendly Persuasion" was remade for in , starring , , and . It was adapted by and directed by . This version also included material from Jessamyn West's sequel novel, "".