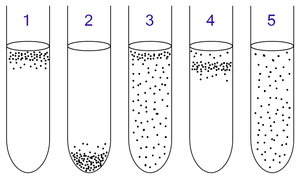 An anaerobic organism or anaerobe is any organism that does not require oxygen for growth. It could possibly react negatively and may even die if oxygen is present. There are three types:

There are many anaerobic fermentative reactions.

The energy released in this equation is approximately 150 kJ per mol, which is conserved in regenerating two ATP from ADP per glucose. This is only 5% of the energy per sugar molecule that the typical aerobic reaction generates.

The energy released is about 180 kJ per mol, which is conserved in regenerating two ATP from ADP per glucose.

Since normal microbial culturing occurs in atmospheric air which is an aerobic environment, the culturing of anaerobes poses a problem, and a number of techniques are employed by microbiologists when culturing anaerobic organisms. For example, handling the bacteria in a glovebox filled with nitrogen or the use of other specially sealed containers or techniques such as injection of the bacteria into a dicot plant which is an environment with limited oxygen. The GasPak System is an isolated container which achieves an anaerobic environment by the reaction of water with sodium borohydride and sodium bicarbonate tablets to produce hydrogen gas and carbon dioxide. Hydrogen then reacts with oxygen gas on a palladium catalyst to produce more water, thereby removing oxygen gas. The issue with the Gaspak method is that an adverse reaction can take place where the bacteria may die which is why a thioglycollate medium should be used. The Thioglycollate supplies a medium mimicking that of a Dicot, thus providing not only an anaerobic environment but all the nutrients needed for the bacteria to thrive.[1]