Communist terrorism are actions carried out by groups which adhere to a Marxist-Leninist or Maoist ideology which have been described as terrorism. State actions carried out by the Soviet Union[1][2], the People's Republic of China[2], North Korea[3] and the actions of the Khmer Rouge in Cambodia[4] have all been described as terrorism. Non-state communist groups such as the Red Brigades, Front Line and the Red Army Faction[5] have also engaged in acts of terrorism in what is known as Propaganda by the deed[6]. These groups hope that through these actions they will inspire the masses to rise up and overthrow the existing political and economic system.[7]

In recent years, there has been a marked decrease in such terrorism, which has been substantially credited to the end of the Cold War and the fall of the U.S.S.R.[8] However, at its apogee, communism was argued by some to be the major source of international terrorism, whether inspired by the ideology or supported by its states.[9]

Historical usage of the term

In the 1930`s the term 'communist terrorism' was used by the Nazi Party in Germany as part of a propaganda effort to create fear of communism. The Nazi`s blamed communist terrorism for the Reichstag Fire and used this as an excuse to push through legislation which removed personal freedom from all citizens.[10][not in citation given][11] In the 1940`s and 1950`s in various Southeast Asian countries such as Malaya, The Philippines and Vietnam, communist groups began to conduct terrorist operations. In the 1960`s the Sino–Soviet split also lead to a marked increase in terrorist activity in the region.[12] Phillip Deery has written that the Malaysian insurgents were called communist terrorists only as part of a propaganda campaign.[13] Though John David Slocum says that it was used to draw attention to their ideological beliefs.[14]

In the late 1960`s in Europe, Japan and in both north and South America various terrorist organizations began operations. These groups which were named the Fighting Communist Organizations (FCO) by Yonah Alexander[15][16] rose out of the student union movement which was at that time protesting against the Vietnam War. In western Europe these groups actions were known as Euroterrorism.[17] The founders of the FCO argued that it would take violence to achieve their idealistic goals and that legitimate protest was both ineffective and insufficient to attain them.[18][19] In the 1970`s there were an estimated 50 Marxist/Leninist groups operating in Turkey and an estimated 225 in Italy. Groups also began operations in Ireland and Great Britain.[20] These groups were seen as a major threat by NATO and also by the Italian, German and British governments.[21] The Italian Communist Party were critical of local terrorist actions and condemned them.[22]

Communist view on the use of terrorism

As Lenin systematically denounced the terrorism practiced by the Socialist Revolutionaries and opposed regicide, it is often perceived that he opposed terrorism; however Lenin had supported terror as tool since his earliest days, and considered terror as the most strategic and effective when employed as mass terror—terror as individual acts of violence was little more than squandering revolutionary resources.[23] After 1905 he increasingly supported more types of terror. According to Trotsky, Lenin emphasized the absolute necessity of terror and as early as 1904, when Lenin was heard to declare "The dictatorship of the proletariat is an absolutely meaningless expression without Jacobin coercion".[24] In 1905 Lenin directed members of the St. Petersburg "Combat Committee" to commit acts of robbery, arson and other terrorist acts.[25] Joan Witte contends that Lenin opposed terrorism except that wielded by the party and the Red Army after 1917,[25] but he only opposed the use of terrorism when it was a mindless act but endorsed its use to advance the communist revolution.[25] It was the disorderly, unorganised and petty terrorism that he objected to and mass terror that he advocated.[23] By 1917, according to Richard Drake, Lenin had abandoned any reluctance to using terrorist tactics, and he believed all resistance to the communist revolution would have to be met with maximum force. Drake states that the terrorist potential in Lenin's program was unmistakable, as acknowledged by Trotsky in his book Terrorism and Communism: a Reply published in 1918.[26] In his book, Trotsky provided an elaborate justification for the use of terror, stating "The man who repudiates terrorism in princliple, i.e., repudiates measures of suppression and intimidation towards determined and armed counterrevolution, must reject all idea of the political supremacy of the working class and its revolutionary dictatorship."[24]

According to Paul Smith, the difference between Stalin and Lenin is that while Stalin is primarily known for state terror, Lenin experienced the full spectrum, engaging in terrorism while he was not in power, then engaging in state terrorism against his own population after gaining power.[27]

In 1917 after the Russian Revolution one of the main features of the new communist regime was the use of terror to subdue the populace, the use of terror has been described as "evident in the regimes very origins" by historian Anna Geifman. Historian W. J. Stankiewicz has also stated

"The USSR’s resort to terrorism signalized an abandonment of the long-standing fiction that Communism is part of the movement of ‘history’; that in order to win, it does not need any special measures. When terrorism is defined as ‘active measures’ that can and ‘ought’ to be part of the policy of a Communist State, we see a shift to a frank acceptance by Communist ideologues that their system is based on power not reason or the forces of history".[28]

An estimated 17,000 people died as a result of this revolutionary violence.[29] Vladimir Lenin stated that his “Jacobian party would never reject terror, nor could it do so", and that they used the Jacobian Reign of Terror of 1793-1794 as a model for their own Red Terror.[30] Felix Dzerzhinsky founder of the Cheka used terrorist actions against all classes of people, though the peasants were heavily targeted due to their refusal to give excessive amounts of grain to the government.[31] Upon founding the New Economic Policy(NEP) Lenin stated, "It is a mistake to think the NEP has put an end to terrorism. We shall return to terrorism, and it will be an economic terrorism".[32]

Also described as an act of communist terror by historian Robert G. Moeller was the deaths of an estimated one million Prisoners of war at the hands of the Soviet regime. They had been used as slave labour and worked to death.[33] The attacks on the Catholic Church in the occupied eastern European nations have also been described as a "terrorist" act.[34]

During World War II the communist Viet Minh led by Ho Chi Minh fought a guerilla campaign against the Japanese occupation forces and, following Japan's surrender, continued their insurgency against the French colonial forces. This insurgency continued until 1954 as the Vietminh and subsequently evolved into the Vietcong (VC), which fought against both the South Vietnamese government and American forces.[35] they used terrorism throughout these campaigns as a specific tactic.[36] leading to the deaths of thousands.[37] After an armistice was signed between the Viet Minh and the French forces in 1954 terrorist actions continued.[38] Carol Winkler has written that, in the 1950s, Vietcong terrorism was rife in South Vietnam with political leaders, provincial chiefs, teachers, nurses, doctors and members of the military being targeted. Between 1965 and 1972 terrorists had killed over thirty-three thousand people and abducted a further fifty seven thousand. [39][40] In Saigon terrorist actions have been described by Nghia M. Vo as "long and murderous" The firing of automatic weapons, planting bombs and throwing grenades were the tactics used. The prime minister of the time Tran Van Huong was shot in an attempted assassination and that in 1964 alone there were 19,000 attacks on civilian targets.[41] 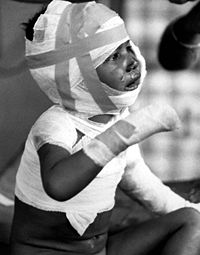 Douglas Pike has called the Massacre at Huế one of the worst communist terrorist actions during the Vietnam War.[42] with some estimates saying up to 5000 dead.[43] The United States Army recorded as killed, "3800 killed in and around Huế, 2786 confirmed civilians massacred, 2226 civilians found in mass graves and 16 non Vietnamese civilians killed.[44] Some apologists have claimed the majority of deaths were caused by US bombing in the fight to retake the city, however the vast majority of dead were found in Mass Graves outside the city.[45] Benjamin A. Valentino has put a death toll of between 45,000 and 80,000 between 1954 - 1975 due to VC terrorism.[46]

Douglas Pike has also described the Dak Son Massacre as a terrorist act. On December 6, 1967 the Viet Cong used flamethrowers on civilians in the village of Dak Son, killing 252 with the majority of those burnt alive being women and children.[47] In May, 1967 Dr. Tran Van-Luy informed the World Health Organisation "that over the previous 10 years Communist terrorists had destroyed 174 dispensaries, maternity homes and hospitals"[48] Ami Pedahzur has written that "the overall volume and lethality of Vietcong terrorism rivals or exceeds all but a handful (e.g. Algeria, Sri Lanka) of terrorist campaigns waged over the last third of the twentieth century",[49] and that the VC used Suicide Terrorism as an example of Propaganda of the deed.[50]

Arthur J. Dommen has written that the majority of those killed due to VC terrorism were civilians, being caught in ambushes as they traveled on buses. Houses and villages were burnt down and there was forced impressment into the VC, and that the image of the VC insurgency being a popular uprising was a facet of communist propaganda[51]

In Rhodesia during the 1970`s terrorists operating in the country had received training in Russia, China, Cuba and Algeria. Both Zimbabwe African People's Union (ZAPU) and the Zimbabwe African National Union (ZANU) based themselves in the Lusaka area in Zambia so as to be within striking distance of Rhodesia.[52]

During the apartheid era in South Africa, the government under the Afrikaner National Party deemed the ANC's creation and use of its military wing Umkhonto we Sizwe as communist supported terrorism.[53] To combat this violence a series of laws were introduced by the government, starting with the Suppression of Communism Act, which defined and banned organisations and people judged to be communists. In 1967 the government promulgated the Terrorism Act which made terrorist acts a statuary crime and implemented indefinite detention for those captured, followed by the Affected Organisations Act in 1974 and the Internal Security Act in 1982.[53]

The New People's Army(NPA) founded on March 29, 1969 have been described as the third major terrorist group operating in the Philippines. And as a major security threat. This group carried out attacks between 1987 and 1992, then after a ten year break began operations again. They had carried out forty two attacks between 2000 and 2006.[54]

The Cambodian genocide committed by the Khmer Rouge, which led to the deaths of an estimated 1.7 million to 2.5 million people has been described as an act of terrorism by Joseph S. Tuman.[55]

Valentino has put an estimated death toll between the years 1927-1949 of 1,800,000 to 3,500,000 on terrorist actions carried out during the Chinese Civil War.[46] An US Department of State report of the late 1940s claimed that after WWII communist terrorism surpassed the actions of Imperial Japan, with suppression, looting and massacres and forced Impressment into "peoples militia"[56]