The College Football Hall of Fame is a hall of fame and museum devoted to college football. Located in South Bend, Indiana, it is connected to a convention center and situated in the city's renovated downtown district, two miles south of the University of Notre Dame campus. It is slated to move to Atlanta in September 2013.[1][2][3] The National Football Foundation (NFF) established the College Football Hall of Fame in 1951, and oversees its support, administration and operation. 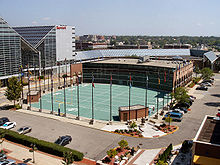 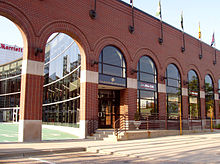 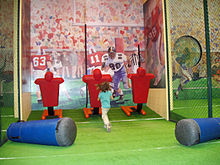 Original plans called for the Hall of Fame to be located at Rutgers University in New Brunswick, New Jersey, the location of the first contest under rules now considered to be those of modern football, between teams from Rutgers and the College of New Jersey, now Princeton University; Rutgers won 6–4. Rutgers donated land near its football stadium, office space, and administrative support. After years of collecting donations for the construction of the building with ground not having been broken and no plans to do so, the New Jersey Attorney General began an investigation of the finances of the Hall of Fame's foundation, the National Football Foundation. In response, the Foundation moved its operations to New York City, where it continued to collect donations for several years. When the New York Attorney General's office began its own investigation the foundation moved to Ohio, where a building finally was constructed.

Despite estimates that the South Bend location would attract more than 150,000 visitors a year, the Hall of Fame drew about 115,000 people the first year (1995) and about 80,000 annually after that.[3] As a result, in September 2009, the Hall of Fame announced it would be moving to Atlanta. The possibility of moving the museum has been brought up in other cities, including Dallas, which had the financial backing of billionaire T. Boone Pickens.[4] Set to open in the fall of 2013, the new $50 million museum will be located next to Centennial Olympic Park, which is near other attractions such as the Georgia Aquarium, the World of Coca-Cola, CNN Center and the anticipated Center for Human and Civil Rights.[1][5] Plans for a health museum also have been announced.[2]

The College Football Hall of Fame's current building was constructed in 1995. Sam Jones of The Troyer Group was the lead architect and a graduate of Notre Dame. The museum, located under the Gridiron Plaza, features memorials and memorabilia of great American football players and coaches of the past. A 12-minute video in the museum's Stadium Theater highlights the "thrills and pageantry" of college football.[6] Interactive areas allow visitors to test their own speed, agility, and punting, passing and blocking skills. Video monitors replay historical games and plays. Busts of coaches and players enshrined in the Hall of Fame are located throughout the museum. The entrance-level floor features a gift shop and restaurant, as well as murals featuring hall-of-famers and significant moments in the history of college football. The exterior of the building features a 19,000-square-foot (1,800 m2) artificial turf space, named the Gridiron Plaza, that can be rented to host outdoor events.

Prior to moving to its current location, the College Football Hall of Fame was located adjacent to Kings Island in Kings Mills, Ohio, near Cincinnati.

As of 2008, there are 829 players enshrined in the College Football Hall of Fame, representing 186 institutions. Additionally, 178 coaches have been inducted into the Hall of Fame.

The following institutions have had the greatest number of players inducted:

The National Football Foundation outlines specific criteria that may be used for evaluating a possible candidate for induction into the Hall of Fame. NFF members and the coaches, athletic directors, and sports information officials representing member schools may submit nominations for consideration. Nominees with the highest votes received from one of the eight District Screening Committees (DSC) located closest to the nominee's college or university are included on that year's ballot, which is distributed to all NFF dues-paying members. The selection of Hall of Fame inductees, however, ultimately is determined by the Foundation's Honor Court.

†Those players that do not comply with the 50-year rule and coaches who have not won 60% of their games may still be eligible for consideration by the Division I-A and Divisional Honors Review Committees, which examine unique cases.