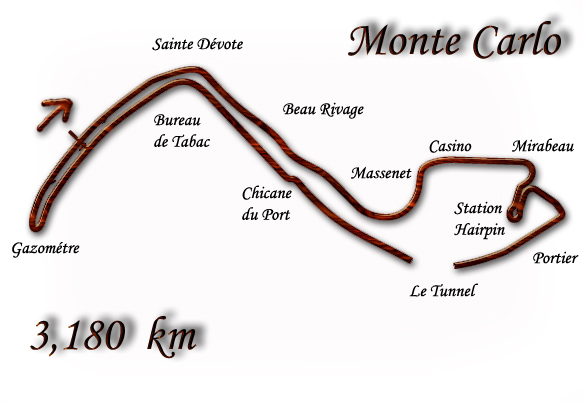 There were no significant changes in the drivers' lineup for Monaco, and the only news was , entering in a non-works March. The Lotus team decided to bring the old 49 chassis instead of the new 72, despite testing it in a non-championship race at Silverstone a couple of weeks earlier. In qualifying, March swept the front row, with on pole (for the Tyrrell team) and alongside him. Third was 's , and fourth the of ; behind them was the Ferrari of . The first Lotus driver was , qualyfing in only eighth place.

Despite the rain in the previous days, the sun shone on race day, and the track was dry. At the start, Stewart led the field, with Amon, Brabham, Ickx and behind him; on the second lap, Beltoise passed Ickx. Stewart began to pull away, and so the order remained unchanged until lap 12, when Ickx retired with a driveshaft failure. On lap 22 Beltoise, who in the meantime went into fourth, retired with transmission problems; on the same lap Brabham passed Amon into second place. It seemed Stewart could comfortably repeat the victory he took in Spain, but on lap 27 his March began misfiring, and he stopped in the pits dropping off. This left Brabham in front, with Amon, Hulme and Rindt, who worked his way from the middle of the pack, behind. In his first race, Peterson was doing well, in seventh place; meanwhile the engine failed on 's , leaving the marshalls some hard work to clean up all the oil he dropped on the track.

At about the same time, Hulme had problems with the gearing of his McLaren, the shift jumping gears, so he dropped back behind Rindt and Pescarolo; on lap 62 Amon's suspension failed, and he was forced to retire, leaving the Austrian in second place, nine seconds behind Brabham. He then increased his pace, and towards the last laps he was on the tail of the Australian. Brabham's victory seemed to be on the way though, as he resisted to all the pressure that Rindt brought on him. But the unbeliavable happened: on the last lap, Brabham misjudged the braking into the Gazomètre, the very last corner, and went straight into into the straw bales, handing the victory to Rindt (a victory greeted by a big jump of joy by ). Brabham quickly reversed and finished the race in second position. Third was Pescarolo in a Matra, while the remaining points positions were rounded out by Hulme, (who worked his way up from the last spot on the grid) and Pedro Rodríguez.