The Curragh Racecourse, usually abbreviated to The Curragh, is Ireland's most important Thoroughbred race track. It is situated on the Curragh plain near Newbridge, County Kildare, Ireland.

The name "Curragh" comes from the Irish (Gaeilge) word Cuirreach, meaning "racecourse". The first recorded race on the plain took place in 1727, but it was used for races before then.[1] The first Derby was held in 1866, and in 1868 the Curragh was officially declared a horse racing and training facility by act of parliament.

The course is right-handed, about two miles long and horseshoe-shaped. Races up to six furlongs are run on a straight course. Additionally there are several training facilities on the site.

The Curragh offers the highest purses and highest quality level of Flat racing in Ireland. In 2007, 10 of Ireland's 12 Group One races will be held at the track. 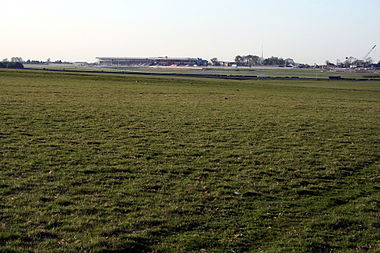 All 5 Irish classics are run at The Curragh.