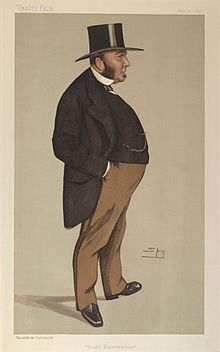 "South Herefordshire". Caricature by Spy published in Vanity Fair in 1891.

Biddulph was the eldest son of Robert Biddulph and his wife Elizabeth (née Palmer), and was educated at Harrow. He was a partner in the London banking firm of Cocks, Biddulph and Co. In 1865 he was elected to the House of Commons for Herefordshire, a seat he held until 1885, and then represented Ross between 1886 to 1900. At first a Liberal, he disagreed with William Ewart Gladstone on the issue of Irish Home Rule and sat as a Liberal Unionist after 1886. Biddulph was also a Justice of the Peace for Herefordshire and Gloucestershire and served as Deputy Lieutenant of Herefordshire. In 1903 he was raised to the peerage as Baron Biddulph, of Ledbury in the County of Hereford.

Lord Biddulph married, firstly, Adelaide Georgiana, daughter of General Jonathan Peel, in 1864. They had two sons and three daughters. After her death in 1872 he married, secondly, Lady Elizabeth Philippa, daughter of Charles Yorke, 4th Earl of Hardwicke, in 1877. They had no children. Lord Biddulph died in April 1923, aged 89, and was succeeded in the barony by his eldest son from his first marriage, John. Lady Biddulph died in 1916, aged 81.