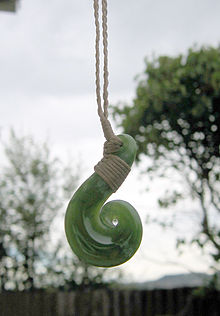 From space, the west coast of New Zealand resembles the greenstone for which it is named.

Pounamu is several types of hard, durable and highly valued nephrite jade and bowenite found in New Zealand. Pounamu is the Māori name; the rocks are also known as "greenstone" in New Zealand English.

The main varieties are kawakawa, kahurangi, īnanga and tangiwai. The first three are nephrite jade, while tangiwai is a form of bowenite.[1] In modern usage pounamu almost always refers to nephrite jade.

Pounamu is generally found in rivers as nondescript boulders and stones which are difficult to identify without cutting them open.

Pounamu plays a very important role in Māori culture. It is considered a taonga (treasure). Tools, ornaments[2] and weapons[3] were made from it; in particular adzes, mere (short clubs) and hei-tiki (neck pendants). These were believed to have their own mana, were handed down as valued heirlooms and were often given as gifts to seal important agreements.

Pounamu jewellery is popular among New Zealanders and is often presented as gifts to visitors. Viggo Mortensen, an actor in The Lord of the Rings, took to wearing a hei matau around his neck. Michael Hurst of the television program Hercules was given a large and heavy pounamu pendant necklace which he wore on the program. During a particularly energetic action scene the pendant bumped his teeth. The producers felt the ornament suited the nature of the program yet considered it a safety risk, and had it replaced with a latex replica.