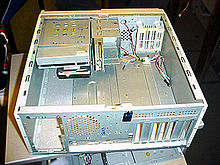 A stripped ATX desktop case. The motherboard will lie flat on the bottom, against the right panel, with peripheral connectors protruding through the rear panel, drive bays at the top and front, and the power supply at the top and rear.

A computer case (also known as a computer chassis, cabinet, box, tower, enclosure, housing, system unit or simply case) is the enclosure that contains most of the components of a computer (usually excluding the display, keyboard and mouse). A computer case is sometimes incorrectly referred to metonymously as a CPU or hard drive referring to components housed within the case. CPU was a more common term in the earlier days of home computers, when peripherals other than the motherboard were usually housed in their own separate cases.

Cases are usually constructed from steel (often SECC — Steel, Electrogalvanized, Cold rolled, Coil) or aluminium. Plastic is sometimes used, and other materials such as wood and even Lego blocks have appeared in home-built cases.

Cases can come in many different sizes (known as form factors). The size and shape of a computer case is usually determined by the form factor of the motherboard, since it is the largest component of most computers. Consequently, personal computer form factors typically specify only the internal dimensions and layout of the case. Form factors for rack-mounted and blade servers may include precise external dimensions as well, since these cases must themselves fit in specific enclosures.

For example, a case designed for an ATX motherboard and power supply may take on several external forms, such as a vertical tower (designed to sit on the floor, height > width) or a flat desktop (height < width) or pizza box (height ≤ 2 inches, designed to sit on the desk under the computer's monitor). Full-size tower cases are typically larger in volume than desktop cases, with more room for drive bays and expansion slots. Desktop cases—and mini-tower cases designed for the reduced microATX form factor—are popular in business environments where space is at a premium.[1]

Currently, the most popular form factor for desktop computers is ATX, although microATX and small form factors have also become very popular for a variety of uses. Companies like In Win Development, Shuttle Inc. and AOpen have popularized small cases, for which FlexATX is the most common[dubious – discuss] motherboard size. Apple Inc. has also produced the Mac Mini computer, which is similar in size to a standard CD-ROM drive.

Tower cases come in mini-tower, mid-tower, and big-tower/full-tower sizes. Full tower cases are typically 22 inches or more in height and intended to stand on the floor. They have anywhere from six to ten externally accessible drive bays, with more bays only internally accessible. The ratio of external to internal bays is shifting, however, as computing technology moves from floppy disks and CD-ROMs to large capacity hard drives, USB flash drives, and network-based solutions. Midtower cases are smaller, about 18" high with two to four external bays. A minitower case will typically have only one or two external bays and stand from 14" to 16" tall.

Computer cases usually include sheet metal enclosures for a power supply unit and drive bays, as well as a rear panel that can accommodate peripheral connectors protruding from the motherboard and expansion slots. Most cases also have a power button or switch, a reset button, and LEDs to indicate power status as well as hard drive and network activity. Some cases include built-in I/O ports (such as USB and headphone ports) on the front of the case. Such a case will also include the wires needed to connect these ports, switches and indicators to the motherboard.

Tower cases have either a single side panel which may be removed in order to access the internal components or a large cover that saddles the chassis. Traditionally, most computer cases required screws to hold components and panels in place (i.e. motherboard, PSU, drives, and expansion cards). Recently[when?] there is a trend toward "screwless" cases, in which components are held together with snap-in plastic rails, thumbscrews, and other methods that do not require tools; this facilitates quick assembly and modification of computer hardware. 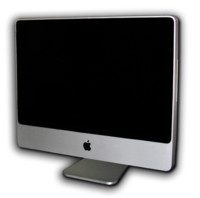 Apple's iMac computer models released from 2004 on have all of their internal components integrated behind an LCD screen. Save for the base, the iMac is about 1.25 inches thick. This miniaturization is achieved using parts designed for notebook computers. [1]

Through the 1990s, most computer cases had simple rectangular shapes, and were often painted beige or white with little attention given to visual design. Beige box designs are still found on a large number of budget computers assembled from generic components. This class of machines is still known as white box computers.

Case modding is the artistic styling of computer cases, often to draw attention to the use of advanced or unusual components. Since the early 2000s, some cases have included clear side panels or acrylic windows so that users can look inside while it is operating. Modded cases may also include internal lighting, custom paint, or liquid cooling systems. Some hobbyists build custom cases from raw materials like aluminum, steel, styrofoam, acrylic, or wood.

Some computer cases include a biased switch (push-button) which connects to the motherboard. When the case is opened, the switch position changes and the system records this change. The system's firmware or BIOS may be configured to report this event the next time it is powered on.

This physical intrusion detection system may help computer owners detect tampering with their computer. However, most such systems are quite simple in construction; a knowledgeable intruder can open the case or modify its contents without triggering the switch.