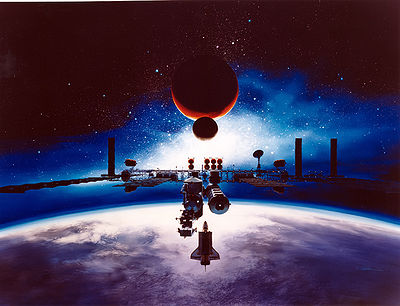 On July 20, 1989, the 20th anniversary of the Apollo 11 Moon landing, George H. W. Bush — then President of the United States — announced plans for what came to be known as the Space Exploration Initiative (SEI).[1] In a speech on the steps of the National Air and Space Museum he described plans calling for constructing Space Station Freedom, sending humans back to the Moon "to stay" and ultimately sending astronauts to explore Mars. He proposed not a 10-year Apollo-style plan, but a long-range continuing commitment based on the three above elements, ending with “a journey into tomorrow – a journey to another planet – a manned mission to Mars.” The President noted it was humanity’s destiny to explore, and America’s destiny to lead. He asked Vice President Dan Quayle to lead the National Space Council in determining what was needed to carry out these missions in terms of money, manpower and technology.

In August 1987 a committee chaired by former astronaut Dr. Sally Ride released a report entitled Leadership and America’s Future in Space.[2] The "Ride Report" advocated establishment of a permanent moon base by 2010 and landing a crew on Mars early in the 21st century.

On January 5, 1988 President Ronald Reagan approved a revised United States national space policy, which was classified. On February 11 a summary "Fact Sheet" about the policy was publicly released.[3] The policy identified six goals of United States space activities, the last of which was, "to expand human presence and activity beyond Earth orbit into the solar system."

In the view of NASA, the July 20, 1989 speech by President Bush, "provided specificity" to that policy goal.[4] Following this announcement NASA Administrator Richard Truly initiated a study of the options to achieve the President’s goals, headed by Johnson Space Center Director Aaron Cohen. A report on that study, called, "the 90-Day Study on Human Exploration of the Moon and Mars" (or simply, "the 90-Day Study"), was published by NASA on November 20, 1989.[4]

The 90-Day Study estimated SEI’s long-term cost at approximately 500 billion dollars spread over 20 to 30 years. According to Steve Dick, NASA Chief Historian, the National Academy of Sciences largely concurred with the NASA study, but White House and Congressional reaction to the NASA plan was hostile, primarily due to the cost estimate.[5] President Bush sought international partners, but the program was thought too expensive even for an international endeavor.

In August 1990, Vice President Quayle established an advisory committee, often called the "Augustine Commission", which recommended that NASA should focus on space and Earth science, and transition human exploration to a “go-as-you-pay” strategy.

On April 1, 1992 Dan Goldin became NASA Administrator, and during his tenure near-term human exploration beyond Earth orbit was abandoned, and the “faster, better, cheaper” strategy was applied to space science robotic exploration.

The Lunar Orbiter Missions would yield further information on the distribution of high-TiO regolith on the whole Moon, through gamma-ray spectroscopy. The purpose was stated to be to provide a detailed geochemical and mineralogical map of the Moon. Global stereoimaging to aid in site selection was also given as a function of the mission.

The CLL program would have consisted of a series of Apollo-type missions, mostly robotic. One mission was entitled Outpost Site Survey and Resource Assessment, involving the use of rovers. The site selected was in Mare Tranquillitatis near 15º N 22º E.[7] This point is on the boundary between mare material and the ejecta blanket of the huge (45 km diameter) crater Plinius, on the east margin of a 25–40 km-wide band of material separating the ejecta blanket from highlands to the west.

For establishment of the First Lunar Outpost (FLO) two possible sites were mentioned: (1) Mare Smythii, which has an equatorial position straddling the eastern terminator of the nearside of the Moon, and (2) the Aristarchus Plateau at 23º N 48º W.