Maude was born in London and educated at the Charterhouse School. In 1881, he was sent to Adelaide, South Australia, on the clipper ship City of Adelaide to regain his health.[1] [2] He returned to England without having regained his health, but nursing the ambition to be an actor.[1]

Maude fulfilled his acting ambition in Denver, Colorado, in the U.S., in 1883. From 1896 until 1905 he was co-manager of the Haymarket Theatre in London with Frederick Harrison. There he became known for his quietly humorous acting in many parts. In 1906 he went into management on his own account, and in 1907 he opened The Playhouse, also in London.

Maude became very well known for his role as "Grumpy" a spoilt old man, who as a retired lawyer solved a crime to keep his loved ones happy. Maude took this play to Australia and toured Adelaide, Melbourne, Brisbane and Sydney where it was immensely popular.[1][2] In 1923 he toured America with Lydia Bilbrook and Mabel Terry-Lewis in If Winter Comes, playing at Chicago in April and New York in the autumn.[3]

He starred in several films in the 1930s, including Grumpy. In 1947, he appeared at the age of 85 in the film While the Sun Shines. 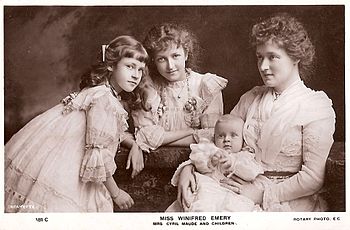 Winifred Emery with her children, c.1901

In 1888, Maude married actress Winifred Emery, the daughter of Samuel Anderson Emery and granddaughter of John Emery, both well-known actors in their day. Their children included Margery Maude, who became an actress; Pamela Cynthia Maude (1893–1975); and John Cyril Maude, who became a barrister, judge and Member of Parliament.[4] Pamela Maude married Major William La Touche Congreve VC, DSO, MC on 1 June 1916. He was killed in action on 20 July 1916 during World War I, for which he was posthumously awarded the Victoria Cross.[5] On 22 December 1919 she married Hon. William Fraser DSO, MC (1890-1964), who later became a Brigadier General.[6]

They also raised a niece, Winifred Isabel Emery (1890–1972),[7][8] after the girl was abandoned by Emery's brother in 1895. This niece, together with her pupil Ruby Preece, was present when dramatist W. S. Gilbert died in his lake at Grim's Dyke in May 1911.[9] Winifred Isabel Emery was the mother of poet David Gascoyne.[7]

In 1905, Maude succeeded Sir Henry Irving as the President of the Actors' Orphanage Fund (now called the Actors' Charitable Trust). During some remarkable years of service he established the first orphanage for actors' children at Croydon, inaugurated innovative fundraising schemes and events, attracted royal patronage, and secured committee members from among leading actors of the day. He served until 1914.[citation needed]