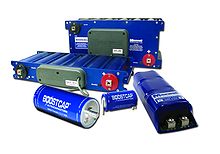 A typical D-cell-sized electrolytic capacitor may have capacitance of up to tens of millifarads. The same size EDLC might reach several farads, an improvement of two orders of magnitude. As of 2011[update] EDLCs had a maximum working voltage of a few volts (standard electrolytics can work at hundreds of volts) and capacities of up to 5,000 farads.[2] In 2010 the highest available EDLC specific energy was 30 Wh/kg (0.1 MJ/kg). [3] The amount of energy stored per unit of mass is called Specific energy, which is often measured in Watt-hour per kilogram (Wh/kg) or MegaJoules per kilogram (MJ/kg). Up to 85 Wh/kg has been achieved at room temperature in the lab[4], lower than rapid-charging lithium-titanate batteries.[5]

Much research is being carried out to improve performance; for example an order of magnitude energy density improvement was achieved in the laboratory in mid-2011.[6] Prices are dropping: a 3,000F capacitor that was US$5,000 ten years before was $50 in 2011.

EDLCs are used for energy storage rather than as general-purpose circuit components. They have a variety of commercial applications, notably in "energy smoothing" and momentary-load devices. They have applications as energy-storage and KERS devices used in vehicles, and for smaller applications like home solar energy systems where extremely fast charging is a valuable feature.

EDLCs do not have a conventional dielectric. Rather than two separate plates separated by an intervening insulator, these capacitors use virtual plates that are in fact two layers of the same substrate. Their electrochemical properties, the so-called "electrical double layer", result in the effective separation of charge despite the vanishingly thin (on the order of nanometers) physical separation of the layers. The lack of need for a bulky layer of dielectric, and the porosity of the material used, permits the packing of plates with much larger surface area into a given volume, resulting in high capacitances in practical-sized packages.

In an electrical double layer, each layer by itself is quite conductive, but the physics at the interface where the layers are effectively in contact means that no significant current can flow between the layers. However, the double layer can withstand only a low voltage, which means that electric double-layer capacitors rated for higher voltages must be made of matched series-connected individual EDLCs, much like series-connected cells in higher-voltage batteries.

EDLCs have much higher power density than batteries. Power density combines the energy density with the speed that the energy can be delivered to the load. Batteries, which are based on the movement of charge carriers in a liquid electrolyte, have [7] relatively slow charge and discharge times. Capacitors, on the other hand, can be charged or discharged at a rate that is typically limited by current heating of the electrodes.

So while existing EDLCs have energy densities that are perhaps 1/10 that of a conventional battery, their power density is generally 10 to 100 times as great. This makes them most suited to an intermediary role between electrochemical batteries and electrostatic capacitors, where neither sustained energy release nor immediate power demands dominate one another.

General Electric engineers experimenting with devices using porous carbon electrodes first observed the EDLC effect in 1957.[8] They believed that the energy was stored in the carbon pores and the device exhibited "exceptionally high capacitance", although the mechanism was unknown at that time.

General Electric did not immediately follow up on this work. In 1966 researchers at Standard Oil of Ohio developed the modern version of the devices, after they accidentally re-discovered the effect while working on experimental fuel cell designs.[9] Their cell design used two layers of activated charcoal separated by a thin porous insulator, and this basic mechanical design remains the basis of most electric double-layer capacitors.

Standard Oil did not commercialize their invention, licensing the technology to NEC, who finally marketed the results as “supercapacitors” in 1978, to provide backup power for maintaining computer memory.[9] The market expanded slowly for a time, but starting around the mid-1990s various advances in materials science and refinement of the existing systems led to rapidly improving performance and an equally rapid reduction in cost.

The first trials of supercapacitors in industrial applications were carried out for supporting the energy supply to robots.

In 2005 aerospace systems and controls company Diehl Luftfahrt Elektronik GmbH chose supercapacitors to power emergency actuation systems for doors and evacuation slides in airliners, including the new Airbus 380 jumbo jet.[10] In 2005, the ultracapacitor market was between US $272 million and $400 million, depending on the source.

As of 2007 all solid state micrometer-scale electric double-layer capacitors based on advanced superionic conductors had been for low-voltage electronics such as deep-sub-voltage nanoelectronics and related technologies (the 22 nm technological node of CMOS and beyond).[11]

Supercapacitors have several disadvantages and advantages relative to batteries, as described below.

In general, EDLCs improve storage density through the use of a nanoporous material, typically activated charcoal, in place of the conventional insulating barrier. Activated charcoal is an extremely porous, "spongy" form of carbon with an extraordinarily high specific surface area — a common approximation is that 1 gram (a pencil-eraser-sized amount) has a surface area of roughly 250 m^2 — about the size of a tennis court. It is typically a powder made up of extremely fine but very "rough" particles, which, in bulk, form a low-density heap with many holes. As the surface area of even a thin layer of such a material is many times greater than a traditional material like aluminum, many more charge carriers (ions or radicals from the electrolyte) can be stored in a given volume. As carbon is not a good insulator (vs. the excellent insulators used in conventional devices), in general EDLCs are limited to low potentials on the order of 2–3 V, and thus must be "stacked" (connected in series), just as conventional battery cells must be, to supply higher voltages.

Activated charcoal is not the "perfect" material for this application. The charge carriers are actually (in effect) quite large—especially when surrounded by molecules—and are often larger than the holes left in the charcoal, which are too small to accept them, limiting the storage.

As of 2010[update] virtually all commercial supercapacitors use powdered activated carbon made from coconut shells.[citation needed] Higher performance devices are available, at a significant cost increase, based on synthetic carbon precursors that are activated with potassium hydroxide (KOH). 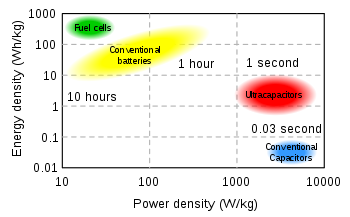 The properties of EDLCs are being improved as new research progresses.

The capacitance of EDLCs was up to several thousands of farads as of 2011[update].

As of 2011[update] EDLCs rated up to a maximum working voltage of not more than about 5V were available.

The specific energy of existing commercial EDLCs ranges from around 0.5 to 30 W·h/kg[27][28] including lithium ion capacitors, known also as a "hybrid capacitor". Experimental electric double-layer capacitors have demonstrated specific energies of 30 W·h/kg and have been shown to be scalable to at least 136 W·h/kg.[29][30] For comparison, a conventional lead-acid battery stores typically 30 to 40 W·h/kg and modern lithium-ion batteries about 160 W·h/kg. Gasoline has a net calorific value (NCV) of around 12,000 W·h/kg; automobile applications operate at about 20% tank-to-wheel efficiency, giving an effective specific energy of 2,400 W·h/kg (effective specific energy of ultracapacitors is not known since data is not available for electrical-output-to-wheel efficiency for ultracapacitor driven vehicles).

EDLCs have energy densities perhaps one tenth that of a rechargeable battery, but power densities typically 10 to 100 times greater.

An EDLC which is charged and stored loses its charge (self-discharge) much faster than a typical electrolytic capacitor, and somewhat faster than a rechargeable battery.

Research and development bring rapid improvements in price as well as physical properties.

Some of the earliest uses were motor startup capacitors for large engines in tanks and submarines, and as the cost has fallen they have started to appear on diesel trucks and railroad locomotives.[33][34] In the 2000s they attracted attention in the green energy world, where their ability to charge much faster than batteries makes them particularly suitable for regenerative braking applications. New technology in development[update] could potentially make EDLCs with high enough energy density to be an attractive replacement for batteries in all-electric cars and plug-in hybrids, as EDLCs charge quickly and are stable with respect to temperature.

China is experimenting with a new form of electric bus (capabus) that runs without powerlines using large onboard EDLCs, which quickly recharge whenever the bus is at any bus stop (under so-called electric umbrellas), and fully charge in the terminus. A few prototypes were being tested in Shanghai in early 2005. In 2006, two commercial bus routes began to use electric double-layer capacitor buses; one of them is route 11 in Shanghai.[35]

In 2001 and 2002 VAG, the public transport operator in Nuremberg, Germany tested an hybrid bus that uses a diesel-electric battery drive system with electric double-layer capacitors.[36] Since 2003 Mannheim Stadtbahn in Mannheim, Germany has operated a light-rail vehicle (LRV) that uses EDLCs to store braking energy.[37][38]

Ultracapacitors are used in some concept prototype vehicles, in order to keep batteries within resistive heating limits and extend battery life.[43][44] The ultrabattery combines a supercapacitor and a battery in one unit, creating an electric vehicle battery that lasts longer, costs less and is more powerful than current plug-in hybrid electric vehicles (PHEVs).[45][46]

The FIA, the governing body for many motor racing events, proposed in the Power-Train Regulation Framework for Formula 1 version 1.3 of 23 May 2007 that a new set of power train regulations be issued that includes a hybrid drive of up to 200 kW input and output power using "superbatteries" made with both batteries and supercapacitors.[47]

When used in conjunction with rechargeable batteries in uninterruptible power supplies and similar applications, the EDLC can handle short interruptions, requiring the batteries to be used only during long interruptions, reducing the cycling duty and extending their life[48]

EDLCs can be used to operate low-power equipment such as PC Cards, photographic flash, flashlights, portable media players, and automated meter reading equipment.[49] They are advantageous when extremely fast charging is required. In professional medical applications, EDLCs have been used to power a handheld, laser-based breast cancer detector (55F to provide 5.3W at multiple voltages; charges in 150", runs for 60").[12]

In 2007 a cordless electric screwdriver that uses an EDLC for energy storage was produced.[50] It charges in 90 seconds, retains 85% of the charge after 3 months, and holds enough charge for about half the screws (22) a comparable screwdriver with a rechargeable battery will handle (37). Two LED flashlights using EDLCs were released in 2009. They charge in 90 seconds.[51]

The idea of replacing batteries with capacitors in conjunction with novel energy sources became a conceptual umbrella of the Green Electricity (GEL) Initiative.[52] One successful GEL Initiative concept was a muscle-driven autonomous solution that employs a multi-farad EDLC as energy storage to power a variety of portable electrical and electronic devices such as MP3 players, AM/FM radios, flashlights, cell phones, and emergency kits.[53]