Son of the Bride

Son of the Bride 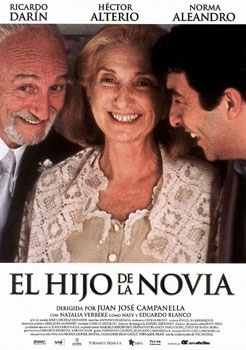 "Son of the Bride" (Spanish: "El hijo de la novia") (2001) is an Argentine film, directed by and written by Campanella and Fernando Castets. The executive producers were Juan Vera and Juan Pablo Galli, and it was produced by . The comedy-drama features features , , , Eduardo Blanco, , among others. [ [http://www.imdb.com/title/tt0292542/ "El hijo de la novia"] at the .] The picture was nominated for an for Best Foreign Language Film.

The film tells of Rafael Belvedere (), a 42-year-old divorced restaurateur, with a young daughter named Vicky (Gimena Nóbile) he has joint custody of. Rafael lives a very hectic lifestyle.

His mother Norma () suffers from and he has not seen her in a year. He sees his father Nino () frequently but sees his friends rarely. He's fielding offers to sell the restaurant he runs in , but changes his mind because it was started by his mother and father and has been in the family for years. One day his childhood friend Juan Carlos Eduardo Blanco, who he has not seen for twenty years, drops by the restaurant and renews their old friendship.

One day, he suffers a and as he recovers in intensive care he's forced to reevaluate his life and to decide his priorities. He now wants to sell the restaurant and move to southern Mexico and raise horses. At the same time his father wants to remarry his wife because they were never married in the church. Rafael is opposed to the renewal of vows because her mother will not be much of a participant.

As part of his new life he tells his girlfriend Nati that he wants some space, some freedom. At first she is hurt but she tells Rafael that he's no bargain as well: he's no , , or even Dick Watson. Rafael is puzzled about the identity of Dick Watson and we find out at the middle of the end credits who Watson is.

The film ends with the wedding and Rafael opening a new restaurant.

Critic Jeff Stark liked the comedy and wrote, "Argentinean director Juan José Campanella's "Son of the Bride" is about a lot of things, but at its core it's about a man's midlife crisis. A witty script, a fleet camera and a pitch-perfect cast keep the movie from being dragged under by the selfishness of its central character...By the end, this crisply agreeable picture has made several points. One, I suppose, is that there are different levels of reconciliation, in troubled families and beleaguered businesses as well as in nations beset by permanent crisis. A more important one, perhaps, is that there's a difference between dropping out and running away." [ [http://dir.salon.com/story/ent/movies/review/2002/03/22/son_of_bride/ Stark, Jeff] . "Salon," film review, "This crisp, witty best foreign film nominee captures a beleaguered restaurateur's midlife crisis (and Argentina's)," 2002. Last accessed: January 21, 2008.]

"New York Times" film critic Stephen Holden gave the comedy drama a mixed review, writing, "Although there is much to like in this psychologically canny film and in Mr. Darin's warm-hearted central performance, the movie is also rambling and digressive. It is so determined to delve into every cranny of Rafael's world, from his minor business woes to his rekindled friendship with the zany childhood friend with whom he used to play games of Zorro, that it has the feel of an unedited personal journal." [ [http://www.nytimes.com/2002/03/22/movies/22BRID.html?ex=1201064400&en=6ab3bfa0ef8a77b5&ei=5070 Holden, Stephen] . "The New York Times," film review, "One Man's Rocky, Rambling Journey Through Midlife," , . Last accessed: January 21, 2008.]

The film opened wide in on , . Later it was presented at the Montréal Film Festival on , 2001.