Selsey is a seaside town and civil parish, about seven miles (11 km) south of Chichester, in the Chichester District of West Sussex, England. Selsey lies at the southernmost point of the Manhood Peninsula, almost cut off from mainland Sussex by the sea. It is bounded to the west by Bracklesham Bay, to the north by Broad Rife (rife being the local word for stream or creek), to the east by Pagham Harbour and terminates in the south at Selsey Bill. There are significant rock formations beneath the sea off both of its coasts, named the Owers rocks and Mixon rocks. Coastal erosion has been an ever present problem for Selsey .[2]

There is only one road (the B2145) in and out of the town which briefly becomes a bridge at a point known as "the ferry", crossing the water inlet at Pagham Harbour. At one time Selsey was inaccessible at flood tide, and a boat was stationed at the ferry to take horses and passengers to and from Sidlesham.[3]

According to Bede the name Selsey is derived from the Saxon Seals-ey and can be interpreted as the Isle of Sea Calves (sea calves are better known as seals).[4]

Edward Heron-Allen identified at least twenty different spellings of the place that we now know today as Selsey.[5]

A selection of versions as identified by Heron-Allen are:

The earliest evidence of human habitation, in the Selsey area, goes back to the stone age.[6] Various stone implements have been found which date to the Palaeolithic period.[7] People have been living in the area ever since.[8][9]

It is believed that, in the Iron Age, the Atrebates (one of the Belgae tribes) built a city at Selsey, similar in status to the pre-Roman urban centre ( oppidum) at Hengistbury Head near Christchurch.[9][11][12][13] So far there is no archaeological evidence to confirm this, although some have speculated that the old city that Camden refers to is, indeed the old Belgae settlement and was located at the Mixon rocks, now south of Selsey Bill.[14][15][16]

There have been various finds of silver and gold coins in the Selsey area.[17] Gold coins from the Atrebates rulers named Commius, Tincommius, Verica, Eppillus, and Cunobelin were found on the beach in 1877, it is thought that these coins would have been minted locally.[18][19] The ancient British coins would have been superseded by Roman coins and there have been finds of them too.[18][20] In addition, some Anglo-Saxon gold fragments were found on the beach between Selsey and Bognor, these were dated as late 6th/ 8th century and what made them particularly interesting is that they had a runic inscription on them, the fragments were handed over to the British Museum.[10][21]

Selsey was the capital of the South Saxons kingdom, possibly founded by Ælle. Wilfrid arrived circa 680 and converted the kingdom to Christianity, as recorded by the Venerable Bede.[22] Selsey Abbey stood at Selsey (probably where Church Norton is today),[23] and was the cathedra for the Sussex Diocese until this was moved to Chichester in 1075 by order of William the Conqueror.[24]

Entry for Selsey in the Domesday Book

In the Domesday Book Selesie is mentioned under the hundred of Summerly:

"The Bishop(of Chichester) holds Selesie in domain.[25] In the time of King Edward it was rated at ten hides, and so it continues. The arable is seven plough lands.[25] There are two ploughs in the demesne, and fourteen villains with eleven bondsmen have five ploughs.".[25][26][27]

The manor of Selsey remained in the Bishop of Chichesters hands until 1561, when it was taken over by the crown[26]

In July 1588 the Spanish Armada arrived off the Isle of Wight with the intention of attacking Portsmouth.[28] The wind changed direction to the south-west. Men from the Manhood Peninsula serving under Drake conceived a plan to lure the Spanish fleet onto the Owers rocks (off Selsey).[16][28] However the Spanish Admiral, recognising the danger decided to head for Calais.[28] 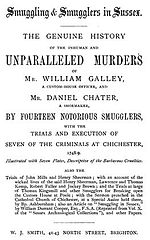 Title page of book about the murder of the two men, the trial and execution.

Over the centuries Selsey has derived an income from the sea, one of the darker enterprises was smuggling.[29] In the eighteenth century Selsey Bill was very much more isolated than it is today, and the sand spit extended farther out to sea. There was only the causeway connected to the mainland and that was covered at high tide.[3] The approach of the local riding officer would have been conspicuous in the extreme.[30] The Rectors of Selsey reputedly claimed a tithe on all kegs landed there, and stories also tell of a passageway leading from the Old Rectory (at Church Norton) to the remains of a Mound, thought to have been built by the Normans.[31][32] The course of the tunnel was marked by a depression on the surface of the ground as late as 1911.[33][34]

In the 1720s one Selsey man ran a regular ferry service to France, travelling back and forth every five weeks, and other prominent Selsey figures made considerable fortunes just from part-time work in the free-trade.[30] Landings were not confined to Selsey itself: in a single run in 1743 2,000 lbs of tea were brought inland at West Wittering some six miles (10 km) away.[30]

In 1749 fourteen smugglers, members of the notorious Hawkhurst Gang, were accused of the murder of Mr. William Galley, a Custom-house Officer, and Mr. Daniel Chater, a Shoemaker.[35] Seven were tried and condemned to death at Chichester assizes, one died in gaol before sentence could be carried out and the other six were hanged at the Broyle north of Chichester.[36] Subsequently, two of the smugglers, John Cobby and John Hammond had their bodies hung in gibbets at Selsey Bill so that they could be seen at great distance from east and west.[37][38]

At the beginning of the 19th century, Selsey opened its first school. In 1818 premises were granted to the Rector and churchwardens of Selsey which were on trust to permit the premises to be used for a schoolhouse or free school, for the gratuitous education of such poor children belonging to the Parish of Selsey as the said trustees or successors may think proper.[39] The school was eventually taken over by the local authority in 1937.[40]

Selsey was connected to Chichester from 1897 to 1935 by a rail link initially called the Hundred of Manhood and Selsey Tramway and later the West Sussex Railway. The light railway rolling stock was all second hand and not very reliable and the journey times lengthy. Various nicknames such as the Selsey Snail were attributed to the tram and comic postcards were issued reflecting its poor service.[41]

Selsey is well known as a tornado hotspot. A tornado in 1998 left an estimated £10m of destruction.[42]

The parish has a couple of Sites of Special Scientific Interest. Bracklesham Bay runs along the coastline of the parish.[44] Pagham Harbour falls partly within the parish.[45] The harbour and surrounding land is of national importance for both flora and fauna. The shingle spit is also of geological interest.

Selsey Cricket Club was founded in 1834 and is one of England's oldest cricket clubs.[46] Cricket had been played in Selsey before the clubs foundation and a famous incident occurred in 1647, when a fielder called Henry Brand died, after being struck on the head by a batsman trying to hit the ball a second time to avoid being out.[46]

The clubs most famous member is the B.B.C. astronomer Sir Patrick Moore, C.B.E. Sir Patrick was a former Club Secretary, and an active playing member, and is now an Honorary Life Vice President.[47] A former President of Selsey Cricket Club was Hubert Doggart, O.B.E., MA. He was the son of the sportsman Graham Doggart who rose to chair the Football Association.

Selsey has a secondary school called The Selsey Academy and two primary schools, Seal Primary School and Medmerry Primary School.[48] Before and after the Second World War there were several private preparatory schools in Selsey including Broombank School housed in the former residence of the music hall entertainer Bransby Williams next to the Selsey Hotel.[48][49] The owner/headmaster from the early 1950s until the school's closure in 1969 was William Percy Higgs (died Bristol 1986), a former Cambridge University organ scholar and music master at Eton.[48] Higgs made Broombank a music and arts school attracting the children of well known actors, artists and musicians as well as temporary students from France, whose numbers occasionally matched those of the British children. [48] 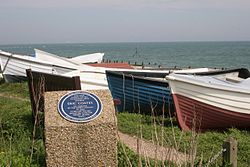 The plaque notes that Eric Coates was inspired to write By the Sleepy Lagoon, the signature tune for Desert Island Discs, whilst watching the sea from here[50]

Notable residents of Selsey include Sir Patrick Moore (Born 1923) – an astronomer, writer, researcher, radio commentator and television presenter has lived in Selsey since 1968.[51]

Air Commodore Edward 'Teddy' Mortlock Donaldson CB, CBE, DSO, AFC and Bar, LoM (USA)(1912–1992) who set a new world air speed record of 616 mph in September 1946, also breaking the 1,000 kilometres per hour (620 mph) barrier for the first time in the Star Meteor IV. Donaldson lived at Iron Latch Cottage, a blue plaque being placed on the beach at the bottom of Park Lane to mark the event. Donaldson has a second plaque at No. 86, Grafton Road.[52]

Eric Coates (1886–1957) the English Composer lived and worked in Selsey. He was inspired to write By the Sleepy Lagoon after overlooking the sea towards Bognor.[53] His musical composition can still be heard as the theme tune to Desert Island Discs on BBC Radio 4.[50]

Edward Heron-Allen (1861–1943): Selsey's most distinguished resident in the early 20th century, Mr Heron-Allen made an enormous contribution to village life and today is still well known as the author of the classic work on local history for the area.[52] [54]

Colin Pullinger (1814–94): A Victorian business man who was an undertaker, wooden pump maker, repairer of umbrellas, letter writer and clerk to the Selsey Sparrow Club. He was famed for making more than two million humane and perpetual mousetraps, which were exhibited at international exhibitions in London and Philadelphia. A blue plaque has been placed at the site of his Inventive Factory, which is today occupied by the offices of Selsey Town Council in the High Street.[52]

Selsey is referenced in the song "Saturday's Kids" by The Jam (from the 1979 album Setting Sons), along with Bracklesham Bay, as a place where these lower-middle-class children take holiday with their families: "Save up their money for a holiday/To Selsey Bill, or Bracklesham Bay."

Selsey is also referenced in the opening scene of the Lerner and Loewe musical My Fair Lady, where one of the lower-class characters is told by Professor Higgins that he comes from Selsey, based on his accent.

Selsey is further referenced in the Madness song Driving in My Car: "I drive up to Muswell Hill, I've even been to Selsey Bill."