Eason Chan
This is a Chinese name; the family name is Chan.

Eason Chan Yik-shun (陳奕迅) is a prominent male singer in Hong Kong's music industry. Undoubtedly one of the most dominant male singers in the post-1997 era of Hong Kong music industry. Eason Chan has been praised by Time magazine as a front runner in the next generation of Cantopop.He is considered by some to be Hong Kong's third "god of song" after Samuel Hui and Jacky Cheung.

His Cantonese album U87 was nominated by Time Magazine as "Five Asian Albums Worth Buying" in 2005. Eason Chan was the big winner at the prestigious Golden Melody Awards in 2003 and 2009. In 2003, he won "Best Male Singer" and "Album of the Year awards" for his work in Mandarin album "Special Thanks To...". In 2009, Chan won "Album of the Year" again for his work in Mandarin album "Don't Want to Let Go".

Chan is the son of Chan Kau-tai, a former housing official of the Hong Kong administration sacked after being proven corrupted.[1] Chan was sent to the United Kingdom for study at the age of 12. He attended St. Joseph's kindergarten, St. Joseph's Primary School in Hong Kong, Dauntsey's School in Wiltshire, England and later Kingston University majoring in architecture. Chan returned to Hong Kong before the completion of his degree to participate in the 1995 New Talent Singing Awards Competition. He won first place. Immediately after his victory, Capital Artists signed a contract with him, ending his future career as an architect while launching his successful career in music.

In 2003, Chan's father, who was Hong Kong Housing Department's chief building services engineer, came under investigation of the Independent Commission Against Corruption for taking bribes. In early 2004, he was found guilty, and sentenced to seven years in jail and fined Hong Kong $2.6 million for accepting more than HK$3 million in bribes.[2]

Chan married his longtime girlfriend Hilary Tsui (former TVB actress) in 2006. His daughter Constance Chan was born on October 4, 2004. Constance Chan's name was given by Eason's good friend and famous songwriter Wyman Wong. Chan gave up smoking after the birth of his daughter. He reportedly did it for Constance and the health of his voice. However, in 2007, he admitted in his concert that he has resumed smoking due to stress from his then ongoing "Moving On Stage" world tour.

On December 9, 2009, Eason carried the 2010 Olympic Torch through the downtown of Montreal, effectively becoming the only person of Chinese descent to carry both the Summer and Winter Olympic torch. 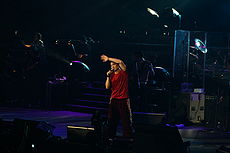 Eason Chan is a frequent winner of Asia's music awards. He is the second non-Taiwanese singer after Jacky Cheung to win Taiwan's Golden Melody Awards. He won "Best Male Singer" in 2003 and "Best Album" twice in 2003 and 2009. He has won the prestigious Hong Kong's Most Popular Male Singer Award twice, in the year 2006 and 2007.[3] He also won his first Asia Pacific's Most Popular Singer Award in 2007, and again in 2008. His album U87 (The name of the album came from his favorite microphone), released in 2005, has been recommended by Time Magazine as one of the five best Asian albums worth buying.[4] U87 also won the top sale of album (non-concert, non-collection category) in Hong Kong in 2005.[5] He was Hong Kong's highest selling male artist in 2002, 2003 and 2007. He has been one of Hong Kong's top selling artists for all years starting from 2000.[6] His concert DVD Get a Life was the highest selling album of 2006.

Eason Chan has been praised by critics and fellow musicians alike as one of the top singers of his generation. Since the very beginning of his career, Eason has been one of the favorites to lead the new generation of Cantopop.[7] He has been described as a breath of fresh air in the HK music scene.[8][9] Over the last ten years, Eason Chan emerged as the leading male singer of his generation, fulfilling his role as an innovator and a leader in the HK music scene, winning prestigious awards one after another.[10][11][12] Eason Chan has also been successful in his work in the Mandopop scene.[13][14] He has won numerous awards in both Mainland and Taiwan, most notably Taiwan's Golden Melody Awards. "Admit It" was another notable work of Eason Chan, which led to a nomination for Golden Melody Awards' Best Male Singer; the award was ultimately won by Gary Chaw. Next year, he was again nominated for Golden Melody Awards' Best Male Singer(for his work in Mandarin album "Don't Want To Let Go"), the award went to Jay Chou. However, Eason won Album of The Year for "Don't Want To Let Go".

Eason Chan has been named by Chinese critics as the next God of Songs (歌神) after Jacky Cheung.[15][16] However, Eason has more than once clarified that he wishes to build his own name instead, and not just be the successor of Jacky Cheung.[17][18] There is a duet called 天下太平 sung by Chan and Jacky Cheung in the album Perfect Match by Albert Leung，Ronald Ng (伍樂城) released in April 2006. Chan and Cheung have collaborated on other occasions as well. They sang a duet of Cheung's 頭髮亂了 in a fundraising campaign for SARS victims in 2003.

Chan not only sings but also plays a variety of musical instrument including piano, violin, accordion, harmonica, bass, guitar and drums. He frequently showcases his musical talent by incorporating instruments into his live performances. Chan is also a song-writer who has written many songs, some included in his albums.

In 2009, Eason Chan performed in "PAX Musica 2009" in Tokyo. He sang seven songs including a Japanese song by Koji Tamaki called "Mr. Lonely". This was his first time performing in Japan publicly. After that, Japanese Musician Ikuro Fujiwara openly praised Chan for his stage charisma and expressed hope to collaborate with Chan in the future. Eason Chan plans to promote his musical works in Japan in 2010.

Months after his Moving On Stage Concerts came to a finish, Chan began another tour in Mainland China, called "Ninety Minutes of Bliss". Instead of playing at grand venues, Chan began this tour hoping to get closer to his fans by playing at smaller venues. He completed two concerts in Nanjing and three more in Shanghai before and during Christmas 2009. Two more concerts were held in Beijing on May 29 and 30, 2010.

In between his tour, Chan held his sixth record-breaking Theme Concerts at the Hong Kong Coliseum for a total of 18 concerts, scheduled from March 20 to April 6, 2010. This new series is called Duo Eason Chan 2010 Concert (《DUO陳奕迅2010演唱會》).

After the May "Ninety Minutes of Bliss" concerts in Beijing, Chan went to Europe for his first ever European Tour scheduled for three cities, London on May 3, Manchester on May 6 and Rotterdam on May 8. The venues for the three concerts were respectively, Royal Albert Hall, Manchester Apollo and Ahoy Rotterdam. Tickets to his London and Manchester concerts were each sold out within hours of ticket release. Chan is the second singer after Roman Tam to perform in the prestigious Royal Albert Hall.[27]

At Eason Chan's concert in Beijing on September 29, 2011 at the Beijing Workers' Stadium, Faye Wong made a special guest appearance, surprising many as Wong has previously never accepted any invitation to appear as a special guest at another singer's concert; this was the first time that she broke her "rule," and she gave her "first" to Eason Chan.[28]

On 18 August and 19 August 2005, Chan performed the musical Wrestling with God (人神鬥), the second programme of Love Music Tour 05 organised by Netvigator. He was the leading actor and producer. Stars featured in the show included famous comedian Jim Chim (詹瑞文), Cantopop singer Wilfred Lau (劉浩龍), Taiwanese talented singer Mavis Fan (范曉萱), Best Supporting Actress Winner of the 23rd Hong Kong Film Awards Josie Ho (何超儀), pop duo at17 and Soler. The story was about the competition among different angels (played by the featured stars) to protect the only man alive in the world (played by Eason Chan). The secret guest, veteran singer George Lam (林子祥), played Chan's late father. The audience were impressed by the performers, who told the story through song and dance.

Eason Chan has been ORBIS International's Sight Ambassador in HK since 2006. He has traveled to India and Sichuan, China, visiting kids and elders with visual impairment, in an effort to raise funds for Orbis.[29] Eason has also been an active participant in HK's fundraising campaigns such as the 2003 fundraiser for SARS victims and the 2008 fundraiser for Sichuan Earthquake victims.

On 7 July 2007 Eason performed at the Chinese leg of Live Earth in Shanghai.[30]

Eason was reported commenting on an aspect of Japanese singer Ayumi Hamasaki's performance after she had finished her Hong Kong concert on 7 April 2007. He remarked that Ayumi Hamasaki might have been lip-syncing in her concert; this statement enraged many of her fans as lip-syncing is highly frowned upon in Asia. They threatened to not buy Eason's CD and wanted him to apologize for his words. Soon after, Grasshopper, a respected Hong Kong singing group, backed Eason's comments. Eason's label, Cinepoly Records, is not commenting on this incident. Hamasaki's record label and reporters came quick to her defense, stating that she did not lipsynch whatsoever and that the sound system was specially flown in from Japan which was the reason for the high quality of sound.

Eason married Hilary Tsui(徐濠縈) in 2006 after many years. In 2004, Eason Chan's daughter Constance Chan(陳康堤) was born.