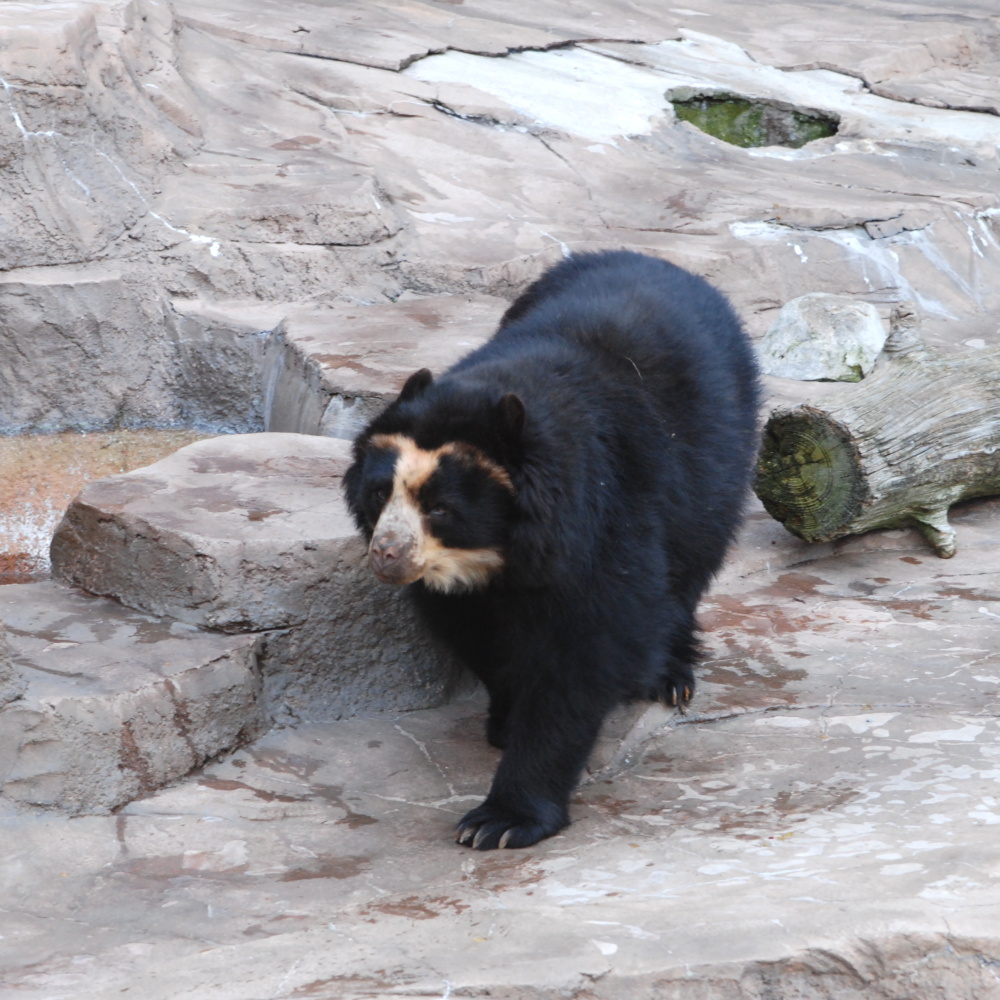 The Spectacled Bear ("Tremarctos ornatus"), also known as the Andean Bear and locally as "ukuko", "jukumari" or "ucumari", is the closest living kin of the short-faced bears of the to age. [ [http://www.grizzlybear.org/bearbook/spectacled_bear.htm Grizzly Bear.org: Spectacled Bear] ] [ [http://www.bearplanet.org/spectacledbear.shtml Bear Planet] ]

The Spectacled Bear is a relatively small species of native to . It has black fur with a distinctive beige-coloured marking across its face and upper chest. Males are 33% larger than females.

"Tremarctos ornatus" is commonly referred to in English as the "Spectacled Bear", a reference to the light colouring on its chest, neck and face which may resemble in some individuals, or the "Andean Bear" for its distribution along the Andes.

The bears make their habitat in the and nearby regions, where an abundance of water and vegetation provides an adequate supplement to their very basic dietary needs of roots, leaves, shoots, berries, occasionally insects, rodents, carrion and rarely, cattle. They are , exhibit periods of rest approximating 1&ndash;2 hours midday, and do not hibernate (though they will den up in inclement weather). Being an arboreal bear, the Spectacled Bear lives mostly in dens near high canopy temperate and subtropical s, or occasionally in the surrounding trees to avoid danger of predatory mammals. Except for humans, the and are the only animals in the range of the Spectacled Bear that potentially could prey on an adult bear female (the typically far larger males are even less likely to ever fall victim to a natural predator).

The young bears have an instinctive urge to climb trees, rocks, and cliffsides from birth as the inordinately protective mother teaches it to reach the highest and most nutritious foods.

Spectacled Bears are most closely associated with high altitude Andean cloud forests above 2,000 m, where epiphytic bromeliads form a major part of their diet. They are more rarely found in lowland rainforest and the dry, coastal forests on the Peru-Ecuador border.

Although the bears tend to isolate themselves from one another to avoid competition, they are non-territorial.

When encountered by humans or other Spectacled Bears, they will react in a docile but cautious manner, unless the intruder is seen as a threat or a mother's cubs are endangered. Like other bears, mothers are very protective in defense of their young and have attacked poachers. However, no deaths have been recorded by South American state governments.

The Spectacled Bear is adapted to the rainforest as it has a very keen sense of smell and a large nose for finding food in small soil crevices and in high tree canopies. It also has sharp, elongated claws for digging root systems and uprooting plants.

The bear can also recognise different individual bears by their unique spectacle markings. The bear is able to plan its pregnancy and labour in order to give birth in the most plentiful food season.

In the BBC documentary, "Natural World, Spectacled Bears - Shadows of the Forest", an adult bear was caught on film feeding on a cattle's carcass. Tapir hair was also found in a bear's droppings, fueling speculation that the bears may be predatory. Local villagers claimed they had witnessed Spectacled Bears attacking their cattle, and produced photographs of cattle wounds that didn't look like they were from a Puma attack. Spectacled Bears may be changing their diet in response to the loss of the rainforest where their usual food source of plants are found.

The spectacled bear population is under threat for a number of reasons. The bears are hunted by locals due to a belief they will eat livestock (despite the fact that spectacled bears do not eat meat in great quantities).The gall bladders of the spectacled bears are also valued in Oriental Medicine and fetch a high price on the international market.Extensive logging and farming have led to a loss of habitat for the bears.

In the documentary, "Paddington Bear: The Early Years", British actor encounters a spectacled bear called Yogi, who was kept in a small cage by Andean villagers (see also ). Fry bartered with the villagers to have the bear released and it was taken to an enclosure in Machu Picchu. Fry's interest in the bears led to the follow up documentary, "Stephen Fry and the Spectacled Bears", and he also wrote and published his experiences in "Rescuing the Spectacled Bear: A Peruvian Diary". In the CBBC television programme a team of eight teenagers build a pre-release enclosure for two spectacled bears before returning them to the wild.