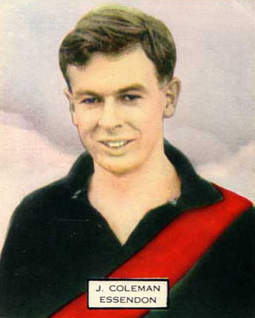 Results and statistics for the season of 1949.

In 1949, the VFL competition consisted of twelve teams of 18 on-the-field players each, plus two substitute players, known as the 19th man and the 20th man. A player could be substituted for any reason; however, once substituted, a player could not return to the field of play under any circumstances.

Teams played each other in a home-and-away season of 19 rounds; matches 12 to 19 were the "home-and-way reverse" of matches 1 to 8.

Once the 19 round home-and-away season had finished, the 1949 VFL "Premiers" were determined by the specific format and conventions of the "Page-McIntyre system".

* The 1949 VFL Premiership team was Essendon.
* The VFL's leading goalkicker was John Coleman of Essendon with 100 goals (including 15 goals in the final series).
* The winner of the 1938 was of South Melbourne with 23 votes on a countback from of Hawthorn (because Clegg had been best on the ground six times to Austen's five).
**As a consequence of its 1981 decision to change its rules relating to tied Brownlow Medal contests, the AFL awarded a retrospective medal to in 1989.
* Hawthorn took the "wooden spoon" in 1938.

* In round 1, John Coleman of Essendon kicks 12 goals in his first VFL game; he was best on the ground. He kicked a goal with his first kick in VFL football, having taken a mark in the first seconds of the match; and he kicked a goal with his last kick of the 1949 season, in last minutes of the Grand Final, to bring his season's total to 100 goals.
* In round 12, Hawthorn score seven goals and no behinds in its match against Essendon. This is the first time since round 9 of the 1899 season that a team failed to score a single behind in a VFL match.
* In round 19, Richmond's captain-coach plays his last VFL game, having played 16 games for Victoria, 312 senior games for Richmond, and 12 games in Richmond Seconds over 19 VFL seasons. Richmond thrashes Geelong 22.12 (144) to 10.15 (75). Dyer kicks six goals.