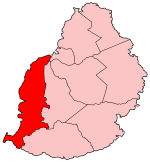 Black River is a district of on the western side of the island. Famous areas include and the . The district capital is Bambous. Previously it wasTamarin. It is the third largest District of Mauritius in area, but the smallest in terms of population. It contains much of Mauritius' unique tropical forests, including those found in the Black River Gorge. During winter deer hunting is practised in the forests.

The name Black River derives from the fact that it is the driest district of the island. This region receives less rainfall than the others.

And this has become its advantage : Several fisherman villages have been progressively converted to tourist areas. For example, , Tamarin and Le Morne.

Tamarin is the only area where surfing is possible during the month of July and August.

Flic-en-Flac is the longest beach on the island and certainly one of the most beautiful ones. Being on the west coast it gives view to beautiful sunsets.

Le Morne has become famous because of the mountain where, during colonial times, runaway slaves used to hide and to kill themselves when they were to be caught. Efforts are being made by local authorities to get Le Morne inscribed on the World Heritage List. Just like recent (and successful) efforts for the .

Le Morne's unique constant wind effects makes it a top / destination. Frequently both board and kite manufacturers can be seen trialing their next generation equipment in this prime location. The wind is prevalent through the winter months (May-Sept). On occasion, with the right waves conditions, the reef outside Le Morne can be surfed.