Sambo (Russian: самбо; САМооборона Без Оружия), (a.k.a. Sombo in USA), is a Russian martial art and combat sport.[1][2] The word "SAMBO" is an acronym for SAMooborona Bez Oruzhiya, which literally translates as "self-defense without weapons". Sambo is relatively modern since its development began in the early 1920s by the Soviet Red Army to improve their hand to hand combat abilities.[1] Intended to be a merger of the most effective techniques of other martial arts, Sambo has roots in Japanese judo plus traditional folk styles of wrestling such as: Armenian Kokh, Georgian Chidaoba, Romanian Trîntǎ, Tatar Köräş, Uzbek Kurash, Mongolian Khapsagay and Azerbaijani Gulesh.

The pioneers of Sambo were Viktor Spiridonov and Vasili Oshchepkov. Oshchepkov died in the prison during the political purges of 1937 after accusations of being a Japanese spy. Oshchepkov spent much of his life living in Japan and training judo under its founder Kano Jigoro. The two men independently developed two different styles, which eventually cross-pollinated and became what is known as Sambo. Compared to Oshchepkov's judo based system, then called "Freestyle Wrestling", Spiridonov's style was softer and less strength dependent. This was in large part due to Spiridonov's injuries sustained during World War I.[3]

Anatoly Kharlampiev, a student of Vasili Oshchepkov, is often officially considered the founder of Sport Sambo. In 1938, it was recognized as an official sport by the USSR All-Union Sports Committee.

There are three FIAS recognized competitive sport variations of Sambo (though Sambo techniques and principles can be applied to many other combat sports).[4]

A Sambo practitioner normally wears either a red or a blue jacket kurtka (куртка) or sambovka (самбовка) similar to a gi top, a belt and shorts of the same color, and sambetki самбетки(ru) or bortsovki/борцовки(ru) (Sambo/wrestling shoes). The Sambo uniform does not reflect rank or competitive rating. Sport rules require an athlete to have both red and blue sets to visually distinguish competitors on the mat.

In Russia, a competitive rating system is used rather than belt colors like judo and jujitsu to demonstrate rank, though some schools around the world now institute belt colors as well. The rating system is called Unified Sports Classification System of the USSR, with the highest athletic distinction known as the Distinguished Masters of Sport in Sambo.

Examination requirements vary depending on the age group and can vary from country to country. The examination itself includes competitive accomplishment as well as technical demonstration of knowledge. Higher level exams must be supervised by independent judges from a national Sambo association. For a rating to be recognized, it must be registered with the national Sambo organization.

Similar to other martial arts being promoted by 'degree' or 'dan', Sambists are promoted by 'razryad'. Each sambo rank consists of three razryads, the 1st being the highest.[7][8]

Sambo was in part born of native Russian and other regional styles of grappling and combative wrestling, bolstered with the most useful and adaptable concepts and techniques from the rest of the world.

Over the centuries, the inhabitants of what is now known as Russia had had ample opportunity to evaluate the martial skills of various invaders: from the Vikings in the West and from the Tatars and Genghis Khan's Golden Horde from Mongolia in the East. The regional, native combat systems included in Sambo's genesis are Russian fist fighting, Tuvan Khuresh, Yakuts khapsagai, Chuvash akatuy, Georgian chidaoba, Romanian trinta, Armenian kokh, and Uzbek Kurash to name a few.

The foreign influences included various styles of European wrestling, catch wrestling, Japanese jujutsu, French savate, muay thai and other martial arts of the day plus the classical Olympic sports of amateur boxing, Greco-Roman wrestling and freestyle wrestling. Sambo even derived lunging and parrying techniques from the Italian school of swordsmanship.

The founders of Sambo deliberately sifted through all of the world's martial arts available to them to augment their military's hand-to-hand combat system. Sambo's early development stemmed from the independent efforts of Vasili Oschepkov and Victor Spiridonov, to integrate the techniques of judo, jujitsu, and other foreign martial arts into native wrestling styles. Oschepkov taught judo and karate to elite Red Army forces at the Central Red Army House. Vasili Oschepkov was one of the first foreigners to learn Judo in Japan and had earned his nidan (second degree black belt, out of then five) from judo's founder, Kano Jigoro. Spiridonov's background involved indigenous martial arts from various Soviet regions as well as an interest in Japanese JuJitsu (though he never formally trained it). His reliance on movement over strength was in part based on the fact that he received a bayonet wound during World War I which left his left arm lame. Both Oschepkov and Spiridonov independently hoped that Soviet military hand-to-hand combat techniques could be improved with an infusion of the techniques distilled from other foreign martial arts. Contrary to common lore, Oschepkov and Spiridonov did not cooperate on the development of their hand-to-hand systems. Rather, their independent notions of hand-to-hand combat merged through cross-training between students and formulative efforts by their students and military staff. While Oschepkov and Spiridonov did have occasion to collaborate, their efforts were not completely united.

Each technique was carefully dissected and considered for its merits, and if found acceptable in unarmed combat, refined to reach Sambo's ultimate goal: to stop an armed or unarmed adversary in the least time possible. Thus, many techniques from jujutsu, judo, and other martial systems joined with the indigenous fighting styles to form the Sambo repertoire. When the techniques were perfected, they were woven into Sambo applications for personal self-defense, police, crowd control, border guards, secret police, dignitary protection, psychiatric hospital staff, military, and commandos.

Spiridonov was a combat veteran of World War I and one of the first wrestling and self-defense instructors hired for Dinamo. His background included Greco-Roman wrestling, freestyle wrestling, many Slavic wrestling styles, and Japanese jujutsu. As a combatives investigator for Dinamo, he traveled to Mongolia and China to observe their native fighting styles.

In 1923, Oschepkov and Spiridinov collaborated (independently) with a team of other experts on a grant from the Soviet government to improve the Red Army's hand-to-hand combat system. Spiridonov had envisioned integrating the most practical aspects of the world's fighting systems into one comprehensive style that could adapt to any threat. Oschepkov had observed Kano's distillation of Tenjin Shin’yo Ryu jujutsu and Kito Ryu jujutsu into judo, and he had developed the insight required to evaluate and integrate combative techniques into a new system. Their developments were supplemented by Anatoly Kharlampiev and I.V. Vasiliev who also traveled the globe to study the native fighting arts of the world. Ten years in the making, their catalogue of techniques was instrumental in formulating the early framework of the art to be eventually referred to as Sambo.

Kharlampiev is often called the father of Sambo. This may be largely semantics, since only he had the longevity and political connections to remain with the art while the new system was named "Sambo". However, Kharlampiev's political maneuvering is single-handedly responsible for the USSR Committee of Sport accepting Sambo as the official combat sport of the Soviet Union in 1938—decidedly the "birth" of Sambo. So, more accurately, Kharlampiev could be considered the father of "sport" Sambo.

Spiridonov was the first to actually begin referring to the new system as one of the "S" variations cited above. He eventually developed a softer, more aikido-like system called Samoz that could be used by smaller, weaker practitioners or even wounded soldiers and secret agents. Spiridonov's inspiration to develop 'Samoz' stemmed from his World War I bayonet injury, which greatly restricted his (left arm and thus his) ability to practice Sambo or wrestle. Refined versions of Sambo are still used today or fused with specific Sambo applications to meet the needs of Russian commandos today.

As an Olympic Sport

It is often stated that Sambo was a demonstration sport at the 1980 Summer Olympics in Moscow, USSR. Youth Sambo was demonstrated in the Games' opening ceremonies; however, Sambo was not formally recognized as demonstration sport. This common error in history books is noted in several sources including History of SAMBO by A. Makoveski and Lukashev's History of Hand-to-Hand Combat in the First Half of the 20th Century: Founders and Authors .[9] Furthermore, the official documents of the 1980 Olympic Organizing Committee do not mention Sambo as a participating sport in the Games.[10]

In 1968, the FILA accepted Sambo as the third style of international wrestling. In 1985, the Sambo community formed its own organization, Federation International Amateur Sambo (FIAS). In 1993, FIAS split into two organizations, both used the same name and logo and the two groups were often referred to as FIAS "East" (under Russian control) and FIAS "West" (under US and Western European control). This split mirrored the last days of Cold War politics of the time as well as the recent break-up of the Soviet Union. In the U.S., disagreements between the sport's organizers and the rise of Brazilian Jiu-Jitsu in the 90s slowed down the growth of Sambo before the success of several Sambo fighters increased its popularity a decade later.[11] In 2005, FILA reached an agreement with FIAS "West" and re-assumed sanctioning over sport Sambo.[12] However, in 2008, FILA again discontinued sanctioning sambo and sambo is now notably missing from the FILA website.[13] At present, FIAS sanctions international competition in sport and combat sambo.

The results of the past five World Sambo Championships: 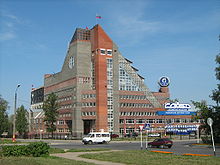 The World Sambo Academy in Kstovo, the venue of many Sambo competitions