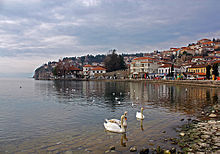 Lake Ohrid (Macedonian: Охридско Езеро, Ohridsko Ezero; Albanian: Liqeni i Ohrit or Liqeni i Pogradecit) straddles the mountainous border between the southwestern Macedonia and eastern Albania. It is one of Europe's deepest and oldest lakes, preserving a unique aquatic ecosystem with more than 200 endemic species that is of worldwide importance.[1] The importance of the lake was further emphasized when it was declared a World Heritage site by UNESCO in 1979 and when, in 2010, NASA decided to name one of Titan's lakes after Lake Ohrid.[2] 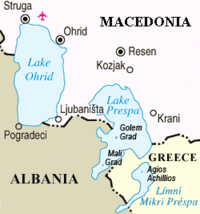 The Ohrid and Prespa Lakes belong to a group of Dessaret basins that originated from a geotectonic depression during the Pliocene epoch up to five million years ago[citation needed] on the western side of the Dinaric Alps. Worldwide, there are only a few lakes with similarly remote origins with Lake Baikal and Lake Tanganyika being the most famous. Most other, short-lived lakes have a life span of less than 100,000 years before they are eventually filled up with sediments. It is believed that in the case of Lake Ohrid this process was delayed by its great depth and small sediment input from its filtered spring inflows. Moreover the Ohrid-Korca graben to the south of the lake is still tectonically active and might compensate sedimentation by subduction. In contrast to Lake Ohrid, Lake Prespa is likely to have turned dry several times in its history, as a result of its karstic underground.[3] In 2008, Macedonian media reported that international experts will be researching the lake in order to determine its age.[4] 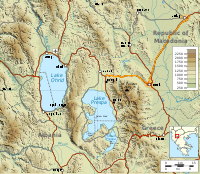 The lake drains an area of around 2600 km² and is fed primarily by underground springs on the eastern shore (about 50% of total inflow), with roughly 25% shares from rivers and direct precipitation. Over 20% of the lake's water comes from nearby Lake Prespa, about 10 km (6.2 mi) to the southeast and at 150 m higher altitude than Lake Ohrid. The water leaves Lake Prespa trickling through underground watercourses in the karstic landscape, where it is joined by mountain range precipitation and eventually emerges in numerous springs along the eastern shore and below the water surface of Lake Ohrid. The water leaves Lake Ohrid by evaporation (~40%) and through its only outlet, the Black Drin River, which flows in a northerly direction into Albania and thus to the Adriatic Sea. The relatively dry, Mediterranean climate and the small drainage basin of 2600 km² (catchment/lake surface ratio of ~7) of Lake Ohrid results in a long hydraulic residence time scale of ~70 yr.[5][6][7]

The water at the surface of Lake Ohrid moves predominantly in a counter-clockwise direction along the shore, as a result of wind forcing and earth rotation, similar to the Ekman-phenomenon known from oceans. In terms of vertical water exchange, convective mixing during winter cooling is the dominant process. However in an average winter only the top 150–200 meters of the lake are mixed, whereas the water below is stably stratified by salinity. The stability due to this salinity gradient allows complete convective mixing events only roughly once every 7 years.[6][8]

Both in terms of nutrient concentration (4.5 μg L−1 of phosphorus), as well as biological parameters Lake Ohrid qualifies as oligotrophic. Thanks to this oligotrophy and the filtered spring inflows, the water is exceptionally clear with transparencies to a depth of as much as 22 meters (66 feet). Despite the lack in annual deep water exchange from complete overturn or plunging rivers, dissolved oxygen never drops below ~6 mg L−1.[9][10] 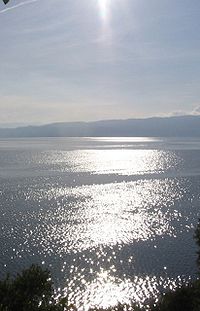 Quite remarkably, exotic species do not seem to be a major issue in Lake Ohrid, although they have been recorded in small populations for several decades or exist in nearby rivers or lakes. The reason lies very probably in the ideal adaptation of the endemic species to the specific conditions in the lake, such as low nutrient availability, good living conditions in greater depth thanks to high water transparency and oxygen content, as well as subaquatic spring inflows supplying cool and oxygen-rich water.[3]

Despite the exceptionally high level of endemism in Lake Ohrid (for example, ten of the seventeen identified fish species and as much as 80% of its molluscan fauna is endemic), a significant number of non-endemic species is found in Lake Ohrid. This includes species, which are mobile (e.g., via water birds) or migratory, such as the European eel.[13]

The lakeshore reed beds and wetlands provide critical habitat for hundreds of thousands of wintering water birds, including rare and threatened species such as the Dalmatian Pelican, Ferruginous Duck, Swan, Spotted Eagle, and Eastern Imperial Eagle. 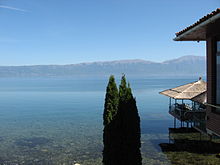 There are three cities on the lake's shores: Ohrid and Struga on the Macedonian side; Pogradec in Albania. There are also several fishing villages, although tourism is now a more significant part of their income. The catchment area of the lake has a population of around 170,000 people, with 131,000 people living directly at the lake shore (43,000 in Albania and 88,000 in Macedonia). The population in the catchment has increased greatly by 100,000 people in the last half century, putting the lake's fragile ecosystem under pressure. The historic monuments, as well as the pristine lake environment make the area around Lake Ohrid a prime site for tourism. In the 1980s more than 200’000 national and international tourists went on a literal pilgrimage to the Macedonian lake side every year. During the Yugoslav crisis and particularly after the interethnic conflicts within Macedonia in 2001 international tourism collapsed but has been slowly recovering during the past years. Even though many of the above visitors are staying for a weekend only, tourism makes an important share of local economy (~1 visitor/inhabitant).[5][9] 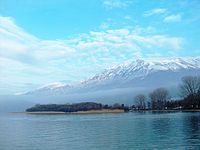 The lake coast at St. Naum Monastery, with Galičica Mountain in the background.

Shore habitats are under particular pressure from human activities. Particular threats are the building of tourist facilities directly at the shore, destroying of reed belts to gain agricultural land and intense pollution close to the mouth of tributaries. Although the effects of these human impacts have not been evaluated in detail they are of great concern, as the shallow water sites are particularly rich in endemic bottom fauna and form important spawning grounds for several endemic fish species. Moreover reed belts have great importance for water birds.[10]

Commercial fish yield, i.e. the two endemic trout species, has dropped significantly over the past decades, both in Macedonia and in Albania. The most probable reason is overfishing and possibly destruction of spawning grounds. Although there are regulations regarding fishing practice (e.g., minimal mesh size) and only a limited number of licensed fishermen, these rules are always not obeyed, as a result of the high market value of the endemic trout. As a reaction to the situation, fishing has been banned for the past two years, to help the fish population recover and to allow scientists collect further data. While most of the endemic fish species are non-migratory, the European eel spawns in the distant Sargasso Sea while its offspring return to the lake. Unfortunately, like in many European lakes, it is very unlikely today that eels can reach Lake Ohrid naturally and return to the Sargasso Sea, as a result of several hydropower dams on the Black Drin and the Drin River, both in Macedonia and Albania. As a result, eel found in Lake Ohrid are stocked populations.[10][14]

Given the population growth over the past 50 years, a particular concern is the potential eutrophication of currently oligotrophic Lake Ohrid from increased pollution. Indeed, sediment cores show a ~3.5 fold increase in phosphorus concentration over the past century. On the one hand, shifts from endemic to common European species, which are better adapted to higher nutrient conditions, have already been observed close to polluted inflows. On the other hand, higher nutrient levels have reduced the water transparency, as well as the oxygen availability in the deep water and at the lake bottom, two properties which are requisite for the endemic flora and fauna. Still, the lake is in a comparably good state at the moment. However it may take more than a decade to see the effects of today's pollution level in the lake, because of its long water residence time. Moreover it was shown that the negative effects from eutrophication would be significantly amplified by global warming. Although there is time to react, computer simulations indicate that at least a 50% reduction in phosphorus input must be reached to keep the deep water oxygenated for the next 50 years at predicted atmospheric warming. This aim could be reached by controlling household wastewater, which is by far the biggest phosphorus source at the moment. First steps in that direction have been taken by extending and improving the existing sewage system in Macedonia in the framework of a GEF (Global Environment Facility) program. The most important next task would be a solution for three remaining, severely polluted tributaries, one in Macedonia and two in Albania.[9][10]