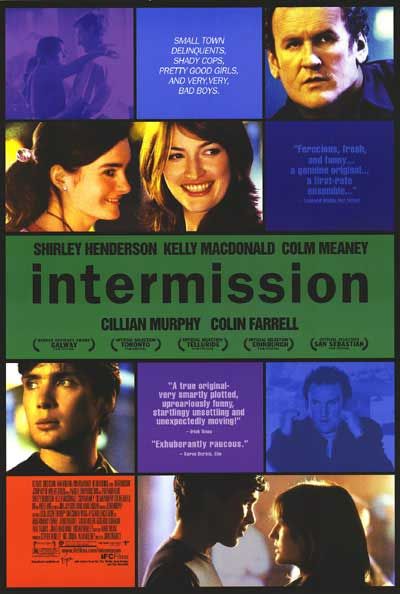 "Intermission" is a directed by John Crowley which tells a story of a young couple and people surrounding them. The film is set in , and is filmed in a TV drama style with several story-lines crossing over one another during the course of the film.

directed and wrote the screenplay for this , set in , and shot in a documentry-like style, and starring a number of Irish actors (along with a few Scottish). Most notably , now established as a star in Hollywood, plays a major role.

Like many of the characters seen in the movie, Lehiff (Farrell) has a talent for trouble with the law, hence he sings the song, “I Fought the Law” (written by ), at the end of the movie. His character is therefore incomplete without doing something criminal, and, indeed, many, if not all, of the characters in the movie seem totally dysfunctional and as incomplete as he is, albeit in their differing ways.

Lehiff’s nemesis, Garda detective Jerry Lynch () feels incomplete without showing himself off as a man who constantly fights the "scumbags" on Dublin’s streets, and enlists the help of Ben Campion (), an ambitious film-maker and the bane of his "go-softer" boss who considers Lynch too nasty a subject to be shown on a mainstream “” series on Irish terrestrial TV.

Ben is told to focus his attention on Sally () who helped passengers after their double-decker bus spectacularly crashes on its side. Sally herself feels incomplete because of her 'Ronnie' (slang for 'moustache') and bitter because of her sister Deirdre () flaunting her new boyfriend, Sam (), a balding middle-aged bank manager who has left his wife of 14 years, Noeleen (), leaving her to question her own self-worth as a woman and wife.

Deirdre had been the girlfriend of John (), whose arch-nemesis is the overbearing supermarket manager Mr. Henderson (), who feels incomplete without feeling good about lording it over his “minions”. John feels utterly devastated and incomplete without Deirdre and will do anything to win her back - getting himself involved in an absurd plan: kidnap Sam, force him to go to his bank, and get ransom money. This plan involves Mick (), the man who had driven the bus which crashed, and Lehiff. As might be expected, things go awry when Sam, who has the money, gets assaulted by an enraged Noeleen on the street, so Mick and John flee the scene without their money.

Mick feels incomplete without gaining his revenge on the boy, Philip (Taylor Molloy), who had lobbed the stone into the windshield, causing him to swerve and crash the bus he was driving (and for which he got fired). However, again things do not go quite his way, and he ends up learning a bitter lesson. As for Lehiff, Lynch, who feels incomplete without nailing him, corners him in an open field, and the scene is set for a confrontation that ends in a way nobody expects.

As the credits roll, Noeleen and Sam are in their house watching television obviously back together, with her bullying him into changing the channel by hand, as opposed to the remote control.

Humour is an element that runs right throughout the movie as the characters have to sort out their otherwise incomplete lives as they have to deal with the harsh realities of being in love, out of love, in a job that one hates, suddenly out of a job, sticking a finger up at authority, taking the law into one’s own hands, each wanting a better deal in life than he or she can get at present. The main theme of the film is that of ordinary people being briefly jolted out of their ordinary lives, only to return to them later.