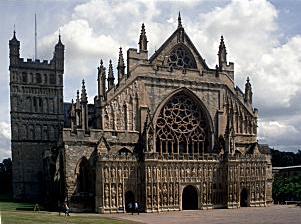 Exeter Cathedral is an in the city of , , in the southwest of and the seat of the . The present building was complete by about 1400, and has the longest uninterrupted vaulted ceiling in England, and other notable features.

The founding of the at Exeter, dedicated to , dates from 1050, when the seat of the of Devon and Cornwall was transferred from because of a fear of sea-raids. A Saxon minster already existing within the town (and dedicated to Saint Mary and Saint Peter) was used by Bishop Leofric as his seat, but services were often held out of doors, close to the site of the present cathedral building. In 1107, , a nephew of William the Conqueror, was appointed to the see, and this was the catalyst for the building of a new cathedral in the Norman style. Its official foundation was in 1133, after Warelwast's time, but it took many more years to complete. Following the appointment of Walter Bronescombe as bishop in 1258, the building was already recognized as outmoded, and it was rebuilt in the Decorated Gothic style, following the example of nearby Salisbury. However, much of the Norman building was kept, including the two massive square towers and part of the walls. It was constructed entirely of local stone, including . The new cathedral was complete by about 1400, apart from the addition of the and chantry chapels.

Like most English cathedrals, suffered during the , but not as much as it would have done had it been a monastic foundation. Further damage was done during the , when the were destroyed. Following the restoration of Charles II, a magnificent new was built in the cathedral by . During the , some refurbishment was carried out by . The bombing of the city in caused considerable damage to the cathedral, including the loss of most of the . Subsequent repairs and the clearance of the area around the western end of the building uncovered portions of earlier structures, including remains of the Roman city and of the original Norman cathedral. Notable features of the interior include the great clock, the minstrels' gallery, and the ceiling bosses, one of which depicts the murder of . Because there is no centre tower, Exeter Cathedral has the longest uninterrupted vaulted ceiling in England.

The clock is one of the group of famous 14th to 16th century s to be found in the West of England. (See also
Salisbury, Wells, Ottery St Mary, and Wimborne Minster.) The main, lower, dial is the oldest part of the clock, probably dating from the 1480s. The 'hand' indicates the time (and the position of the sun in the sky) on a . The numbering consists of two sets of I-XII . The silver ball and inner dial shows both the age of the moon and its phase (using a rotating black shield to indicate the moon's phase). The upper dial, added in the 1760s, shows the minutes.

The Latin phrase Pereunt et Imputantur, a favourite motto for clocks and first penned by the Latin poet in the poem "Character of a happy life", is usually translated as "they perish and are reckoned to our account", referring to the hours that we spend, wisely or not. The original clockwork mechanism, much modified, repaired, and neglected until it was replaced in the early 20th century, can be seen on the floor below .

The Cathedral organ stands proud and imposing on the ornate medieval screen, preserving the old classical distinction between and with marked grandeur. The largest pipes, the lower octave of the 32ft Contra Violone, stand just inside the south . The organ also boasts one of the very few stops in the country (the only other examples to be found in Britain are in 's Anglican and 's St Paul's Cathedrals), housed in the , along with a chorus of diapason pipes. [ [http://npor.emma.cam.ac.uk/cgi-bin/Rsearch.cgi?Fn=Rsearch&rec_index=R00458 Details of the organ from the National Pipe Organ Register] ]

It is recorded in the of the 11th-century that had brought together a great collection of holy relics at Exeter Cathedral; sending out emissaries at great expense to the continent to acquire them. Amongst these items were a little of "the bush in which the Lord spoke to ," and a "bit of the candle which the angel of the Lord lit in Christ's tomb."