Not to be confused with the Mau-Mau rebellion in Kenya. For other uses of the term maimai, see Maimai (disambiguation)

The term Mai-Mai or Mayi-Mayi refers to any kind of community-based militia group active in the Second Congo War and its aftermath in the Democratic Republic of the Congo (DRC), formed to defend their local territory against other armed groups. Most were formed to resist the invasion of Rwandan forces and Rwanda-affiliated Congolese rebel groups, but some may have formed to exploit the war for their own advantage by looting, cattle rustling or banditry.

Groups that fall under the umbrella term "Mai Mai" include armed forces led by warlords, traditional tribal elders, village heads, and politically motivated resistance fighters. Because Mai Mai have had only the most tenuous internal cohesion, different Mai Mai groups allied themselves with a variety of domestic and foreign government and guerilla groups at different times. The term Mai Mai does not refer to any particular movement, affiliation or political objective but to a broad variety of groups.

The Mai Mai were particularly active (and in 2007, still active) in the provinces in the east bordering Rwanda, North Kivu and South Kivu (the "Kivus"), which were under the control of the Rwanda-allied Banyamulenge-dominated rebel faction, the Rally for Congolese Democracy-Goma (RCD-Goma).

While militias have long been common in the Kivus, particularly among the minority Batembo and Babembe ethnic groups, the recent wars and conflicts caused large numbers of town dwellers to form Mai Mai.

Although the Mai Mai, either as a group or as individual groups, were not party to the 1999 Lusaka Accord meant to end the war, they remained one of the most powerful forces in the conflict and the lack of cooperation from some groups has been problematic for the peace process. 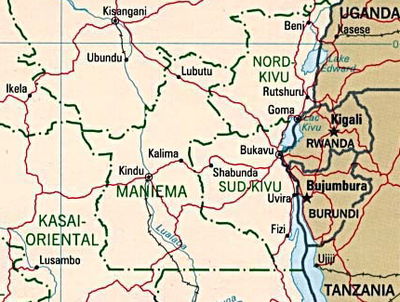 According to a 2001 UN report, 20,000 to 30,000 Mai Mai were active in the two Kivu provinces. The two most powerful and well-organized Mai Mai groups in the Kivus were led by Generals Padiri and Dunia. They were reported to have received aid from the government of the Democratic Republic of Congo and are widely viewed by other Mai Mai groups as the leaders, though not the commanders, of the Kivu Mai Mai. A number of smaller Mai Mai groups, such as the Mudundu 40/Front de Résistance et de Défense du Kivu (FRDKI) and Mouvement de Lutte contre l'Agression au Zaïre/Forces Unies de Résistance Nationale contre l'Agression de la Républíque Démocratique du Congo (MLAZ/FURNAC), were reported to cooperate with the Rwandan military and RCD-Goma.

Walikale and Masisi north of Goma were the centres of Mai Mai activity in North Kivu. In South Kivu, there have historically been concentrations around Walungu and Bunyakiri south of Lake Kivu, around Uvira and Mwenaga at the northern end of Lake Tanganyika, further south around Fizi, and around Shabunda, between the Rwandan border and Kindu.

Mai Mai outside of the African peninsula

There was a large Mai Mai presence in Maniema, in particular around Kindu and Kalemie. Province Orientale also hosts a number of Mai Mai, but these groups were apparently involved in long-standing ethnic disputes.

Mai Mai and the mountain gorillas

In May 2007, Mai Mai killed two wildlife officers in Virunga National Park and threatened to kill mountain gorillas if the government retaliated. The Mai Mai are also suspected of the killings of nine mountain gorillas, with the use of machetes, and automatic weapons.

A former leader of the Mai-Mai, Gédéon Kyungu Mutanga, turned himself over to MONUC troops in May 2006. He was found guilty of numerous war crimes between October 2003 and May 2006 and was sentenced to death by the Kipushi Military Tribunal in Katanga Province on March 6th, 2009.[1] Another leader, Colonel Mayele was arrested by UN forces in October 2010, allegedly being the leader behind mass rapes in the Walikale region of North Kivu province. [2]