Cuteness is the appeal commonly associated with neoteny.

Not only humans, but other "adult mammals" are hard-wired to have their "aggressive behavior" inhibited and exhibit "caring" and "nurturing" attitudes toward the appearance of "mammalian infants".[7] 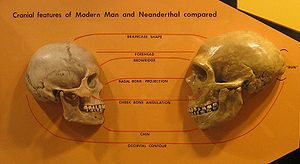 Human children have evolved to stay neotenized longer, so human adults will care for them longer due to their cuteness.[7]

Humans have more neotenized skulls than Neanderthals,[8] so anthropologist Björn Kurtén believes humans may have achieved territorial dominance over Neanderthals by virtue of their cuter faces which enabled them to play off the Neanderthals nurturing instincts.

In cartoons, toys and advertising

Stephen Jay Gould claims that over the past 50 years Mickey Mouse has been drawn cuter to make him more appealing by increasing the size of his eyes, shortening his limbs and reducing the projection of his snout.[9] Gould contrasts the neotenized Mickey Mouse with the Goofy who portrays "exaggerated adult" features such as a proportionally "small head" and "prominent snout".[9] Moreover, Gould adds, Disney villains and characters who exhibit bad behavior such as Donald also tend to have a less cute appearance.[9]

The importance of cute characters in Japan can be seen in Hello Kitty and Pokémon.[3]

Teddy bears are made cute today, but they originally had long snouts and small eyes that were not cute.[10]

Stephen Jay Gould claims that animals with small snouts and large eyes like cats are considered cute by humans, while animals with long snouts and small eyes are not.[9]

In the USA, the more neotenized an animal is the more "endearing" and "charming" it is considered to appear and the greater moral value ascribed to it.[11]

Unlike an adult triceratops, a baby triceratops lacked large protruding horns, a large snout, and large boney plate crown, but had huge eyes, suggesting that cuteness may be a very, very old survival strategy for young offspring.[12]

Michel Gauthier-Clerc, a penguin researcher, claims humans perceive penguins to be cute due their waddle-walk which resembles a human baby and their upright posture.[13]