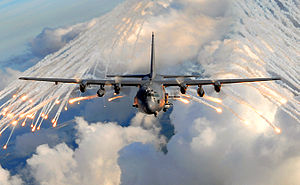 A (decoy) flare is an aerial infrared countermeasure to counter an infrared homing ("heat seeking") surface-to-air missile or air-to-air missile. Flares are commonly composed of a pyrotechnic composition based on magnesium or another hot-burning metal, with burning temperature equal to or hotter than engine exhaust. The aim is to make the infrared-guided missile seek out the heat signature from the flare rather than the aircraft's engines.

In contrast to radar-guided missiles, IR-guided missiles are very difficult to find as they approach aircraft. They do not emit detectable radar, and they are generally fired from a rear visual-aspect, directly toward the engines. In most cases, pilots have to rely on their wingmen to spot the missile's smoke trail and alert them. Since IR-guided missiles are inherently far shorter-legged in distance and altitude range than their radar-guided counterparts, good situational awareness of altitude and potential threats continues to be an effective defense. More advanced electro-optical systems can detect missile launches automatically from the distinct thermal emissions of a missile's rocket motor.

Once the presence of a "live" IR missile is indicated, flares are released by the aircraft in an attempt to decoy the missile; some systems are automatic, while others require manual jettisoning of the flares.

The aircraft would then pull away at a sharp angle from the flare (and the terminal trajectory of the missile) and reduce engine power in attempt to cool the thermal signature. Optimally, the missile's seeker head is then confused by this change in temperature and flurry of new signatures, and therefore follows the flare(s) rather than the aircraft. 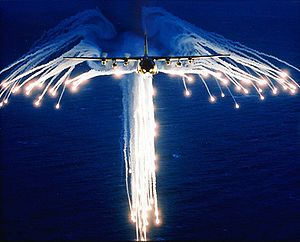 A C-130 Hercules deploying flares, sometimes referred to as Angel Flares due to the characteristic shape

Apart from military use, some civilian aircraft are also equipped with countermeasure flares, against terrorism: the Israeli airline El-Al, having been the target of the failed 2002 airliner attack, in which shoulder-launched surface-to-air missiles were fired at an airliner while taking off, began equipping its fleet with radar-based, automated flare release countermeasures from June 2004.[1][2] This caused concerns in some European countries, which proceeded to ban such aircraft from landing at their airports.[3]

Most flares, like the MJU-27A/B flares, must be kept in an airtight storage compartment before deployment. These flares, known as pyrophoric flares, are made of special materials that ignite when they come in contact with the air. This is a safety and convenience factor, since attempting to ignite a flare inside the fuselage and then deploying it is risky. However pyrotechnic flares (such as the MJU-32) also exist, and offer their own safety benefit; requiring an external ignition method, an accidental leak or puncture in the storage compartment would not result in a catastrophic fire on board the aircraft as with a pyrophoric flare.

Flares are most commonly gravity-fed from a dispenser inside the aircraft's fuselage. These dispensers can be programmed by the pilot or ground crew to dispense flares in short intervals, one at a time, long intervals, or in clusters. Most currently-used flares are of the pyrophoric variety, and thus the dispensers do not have to ignite and deploy the flare at the same time. With pyrotechnic flares, a lanyard automatically pulls off a friction cap covering the exposed end of the flare as it falls from the dispenser. A friction surface inside the cap rubs against the exposed end of the flare (similar to a match-head and striking surface) and ignites the flare. 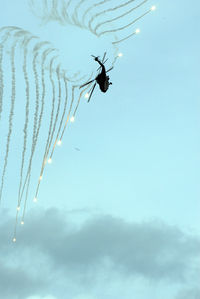 Flares burn at thousands of degrees, which is much hotter than the exhaust of a jet engine. IR missiles seek out the hotter flame, believing it to be an aircraft in afterburner or the beginning of the engine's exhaust source.

As the more modern infrared seekers tend to have spectral sensitivity tailored to more closely match the emissions of airplanes and reject other sources (the so-called CCM, or counter-countermeasures), the modernized decoy flares have their emission spectrum optimized to also match the radiation of the airplane (mainly its engines and engine exhaust). In addition to spectral discrimination, the CCMs can include trajectory discrimination and detection of size of the radiation source.

The newest generation of the FIM-92 Stinger uses a dual IR and UV seeker head, which allows for a redundant tracking solution, effectively negating the impact of modern decoy flares (according to the U.S. Department of Defense). While research and development in flare technology has produced an IR signature on the same wavelength as hot engine exhaust, modern flares still produce a notably (and immutably) different UV signature than an aircraft engine burning kerosene jet-fuel. 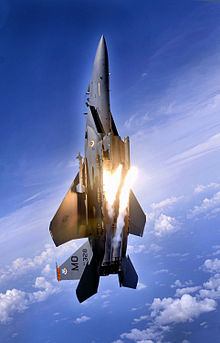 For the infrared generating charge, two approaches are possible: pyrotechnic and pyrophoric.

Upon ignition of the decoy flare, a strongly exothermal reaction is started, releasing infrared energy and visible smoke and flame, emission being dependent on the chemical nature of the payload used.

There is a wide variety of calibres and shapes available for aerial decoy flares. Due to volume storage restrictions on board platforms, many aircraft of American origin use square decoy flare cartridges. Nevertheless, cylindrical cartridges are also available on board American aircraft, such as MJU 23/B on the B-1 Lancer or MJU-8A/B on the F/A-18 Hornet; however, these are used mainly on board French aircraft and those of Russian origin, e.g. PPI-26 IW on the MiG 29. 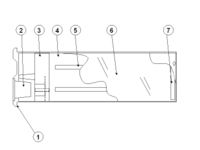 Schematic view of a MJU-7A/B decoy flare cartridge : anodised aluminium cartridge (1); an electrical impulse cartridge (2), providing both expulsion and, in some cases, direct ignition of the payload; a pusher plate acting as a safe&arm device (3); the payload (4) with first fire layer (5); the wrapping self-adhesive polyester reinforced aluminum foil (6); and a front washer (7).

Pyrotechnic flares use a slow-burning fuel-oxidizer mixture that generates intense heat. Thermite-like mixtures, e.g. Magnesium/Teflon/Viton (MTV), are common. Other combinations include ammonium perchlorate/anthracene/magnesium, or can be based on red phosphorus.

To adjust the emission characteristics to match closer the spectrum of jet engines, charges on the base of double base propellants. These compositions can avoid the metal content and achieve cleaner burning without the prominent smoke trail.

Certain pyrotechnic compositions, for example MTV, give a great flame emission upon combustion and yield a temperature-dependent signature and can be understood as gray bodies of high emissivity (e~0.95). Such payloads are called blackbody payloads. Other payloads, like iron/potassium perchlorate pellets, only yield a low flame emission but also show temperature-dependent signature.[5] Nevertheless, the lower combustion temperature as compared to MTV results in a lower amount of energy released in the short-wavelength IR range. Other blackbody payloads include ammonium perchlorate/anthracene/magnesium and hydroxyl-terminated polybutadiene (HTPB) binder.[6]

A sectional of the typical LLU-2B ground illumination flare.

Now other payloads provide large amounts of hot carbon dioxide upon combustion and thus provide a temperature-independent selective emission in the wavelength range between 3 and 5 µm. Typical pyrotechnic payloads of this type resemble whistling compositions and are often made up from potassium perchlorate and hydrogen lean organic fuels.[7] Other spectrally balanced payloads are made up similarly as double base propellants and contain nitrocellulose (NC), and other esters of nitric acid [8] or nitro compounds as oxidizers such as e.g. hexanitroethane and nitro compounds and nitramines as high energy fuels.[9] The main advantage of the latter payloads is their low visibility due to the absence of metals such as sodium and potassium that may be either easily thermally excited and give prominent emissions or give condensed reaction products (such as carbonates and chlorides), which would cause a distinct smoke trail.

Pyrophoric flares work on the principle of ejecting a special pyrophoric material out of an airtight cartridge, usually using a gas generator, e.g. a small pyrotechnic charge or pressurized gas. The material then self-ignites in contact with air. The materials can be solid, e.g. iron platelets coated with ultrafine aluminium, or liquid, often organometallic compounds; e.g. alkyl aluminium compounds, e.g. triethylaluminium. Pyrophoric flares may have reduced effectivity at high altitudes, due to lower air temperature and lower availability of oxygen; however oxygen can be coejected with the pyrophoric fuel.

The flames of pyrophoric fuels can also reach the size of several metres, in comparison with about less than one metre flame of MTV flares. The trajectory can be also influenced by tailoring the aerodynamic properties of the ejected containers.[10]

As with the pyrotechnic payloads these will also give either graybody radiation or selective emissions. In contrast to pyrotechnic payloads, pyrophoric substances use the oxygen from the environment for oxidation. Hence specific energy density of pyrophorics is always higher as compared to any pyrotechnic; however, pyrophorics suffer from low oxygen partial pressure at greater heights. A typical liquid pyrophoric fuel is triethylaluminium. Upon combustion of triethylaluminium, a selective IR spectrum is obtained, which is mainly determined from carbon dioxide and water vapour. Any transient or permanent combustion product of aluminium are not IR-active in this region of the electromagnetic spectrum.[11]

Solid pyrophoric payloads are based on iron platelets coated with a porous aluminium layer. Based on the very high specific surface area of aluminium those platelets instantaneously oxidize upon contact with air. In contrast to triethylaluminium combustion, those platelets yield a temperature-dependent signature.

These payloads contain red phosphorus as an energetic filler. The red phosphorus is mixed with organic binders to give brushable pastes that can be coated on thin polyimide platelets. The combustion of those platelets yields a temperature-dependent signature. Endergonic additives such as highly dispersed silica or alkali halides may further lower the combustion temperature.[12]