Murrayfield Stadium (usually just known as Murrayfield) is a sports stadium located in the west end of Edinburgh, the capital of Scotland. Its all-seater capacity was recently reduced from 67,800 to 67,130 to incorporate the largest permanent "big screen" in the country though it still remains the largest stadium in Scotland and one of the largest in the United Kingdom overall.

The stadium is the home of the Scottish Rugby Union (SRU), and is primarily used as a venue for rugby union and hosts most of Scotland's home test matches, as well as the Edinburgh Sevens, the Scottish Hydro Electric Cup final, as well as Magners League and Heineken Cup matches.

Although mainly a rugby union stadium, Murrayfield has in the past hosted American football, rugby league and association football matches and music concerts. One of the most notable of the latter was the Edinburgh 50,000 - The Final Push concert as part of Live 8. 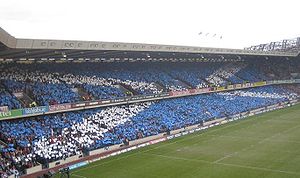 It has good public transport links, being particularly well-served by bus links along the Corstorphine Road. Despite the line running adjacent to the stadium, its nearest railway station is Haymarket, which is a 1-mile walk from the stadium.

The SRU bought some land and built the first Murrayfield which was opened on 21 March 1925. Previously internationals had been played at Inverleith. The first visitors were England, whom Scotland beat to win their first Five Nations Championship Grand Slam.

During the Second World War the ground at Murrayfield was offered to the nation and was taken over by the Royal Army Service Corps and used as a supply depot. During the war years the armed forces sports authorities managed to arrange two Scotland v. England services internationals each year, on a home-and-away basis. Scotland's home matches were played at Inverleith for the first two years with a return to Murrayfield in 1944 after that ground's derequisition. In 1994 Murrayfield completed a 50 million pound renovation where floodlights were installed for the first time in its history. It once held the record for the largest ever attendance for a rugby union match, and still the biggest in the United Kingdom, with 104,000 watching Scotland play Wales in 1975 in a Five Nations match. 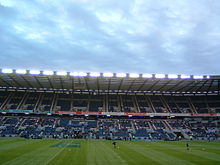 Currently Murrayfield is used for most Scottish international rugby union matches, with all Scotland's Six Nations home games being played here. The stadium also hosts Edinburgh Rugby, one of Scotland's two professional sides in the Magners League that features teams from Ireland, Wales and Italy. (For Magners League matches, only the lower tier of the West Stand is typically used.) Since 2007, Murrayfield has hosted the Edinburgh 7s, the final event in the annual IRB Sevens World Series in rugby sevens. Murrayfield hosted select matches from the 2007 Rugby World Cup. The stadium also hosted the Heineken Cup Final in 2005, when Toulouse beat Stade Français by 18 points to 12, and again in 2009, with Leinster defeating Leicester by 19 points to 16.[1]

Murrayfield also hosts football matches. The first football match played on Murrayfield was played between the local Scottish Premier League side Heart of Midlothian F.C. (Hearts) and the Portuguese Sporting Braga in September 2004. In 2006, Hearts selected Murrayfield as their home venue for their European campaign in the 2006/2007 season, as Tynecastle did not meet the UEFA criteria for hosting European football matches. This has seen clubs such as Ferencvaros, Schalke 04 and AEK Athens playing at Murrayfield. Additionally, Hearts hosted a preseason friendly on July 28, 2007 against FC Barcelona in front of a crowd of nearly 58,000. 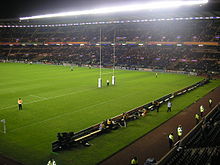 Although a union stadium, Murrayfield hosted the rugby league Rugby League Challenge Cup finals in 2000 and 2002 and 2003. The stadium will host rugby league's Super League Magic Weekend as of 2009, taking over from the Millennium Stadium.

Murrayfield has played host to American football and was one of two home venues for the now defunct Scottish Claymores in the NFL Europa between 1995 and 2004, the other being Hampden Park in Glasgow. Additionally, it hosted World Bowl IV on 23 June 1996. It has been mentioned as a potential future host site for the NFL International Series, should the National Football League add future games outside the series' current permanent home, Wembley Stadium in London.

In July 2005, Murrayfield hosted the final Live 8 concert, Edinburgh 50,000 - The Final Push, with performances from the likes of James Brown, Texas & The Proclaimers.

British rock group Oasis played a sold-out show on 17 June 2009, as part of their world tour. This was the last time they would play a gig in Scotland and the second time they had played the stadium, the first being on their Standing on the Shoulder of Giants Tour in 2000. In June, 1999, The Rolling Stones played at Murrayfield on their "Bridges To Babylon" tour.

It has a 100 m running track by the main stand.

The seats incorporate the letters "SRU" as well as a tartan pattern. This tartan is the official tartan of the SRU.