Proto-Slavic is the from which later emerged. It was spoken before the . As with all other proto-languages, no attested writings have been found; the language has been reconstructed by applying the to all the attested Slavic languages as well as other .

Proto-Slavic passed through a stage during which it developed numerous lexical, phonological and morphological isoglosses with modern-day , which are its closest living Indo-European relatives. A Balto-Slavic language continuum was ancestral to three discernible genetic subgroupings: Eastern Baltic, Western Baltic, and an innovative dialect that was ancestral to Proto-Slavic. Seccesion of Proto-Slavic speakers is estimated on archaeological and glottochronological critera to have occurred sometimes in 1500-1000 BCE. [cf. Novotná & Blažek:2007 with references. "Classical glottochronolgy" conducted by Czech Slavist M. Čejka in 1974 dates the Balto-Slavic split to -910±340 BCE, Sergei Starostin in 1994 dates it to 1210 BCE, and "recalibrated glottochronology" conducted by Novotná & Blažek dates it to 1400-1340 BCE. This agrees well with Trziniec-Komarov culture, localized from Silesia to Central Ukraine and dated to the period 1500–1200 BCE.]

The original homeland of the speakers of Proto-Slavic is somewhat controversial. The most ancient recognisably Slavic (river names) are to be found in northern and western and southern (see map). It has also been noted that Proto-Slavic seemingly lacked a maritime vocabularyFact|date=October 2007.

Proto-Slavic "proper" is reconstructable to around 600 C.E. From typological point of view, that language was phonologically still very similar with Baltic languages. [Matasović 2008:114] At this time, Proto-Slavic is believed to have been spoken uniformly as the onomastic evidence and glosses of Slavic words in foreign-language texts show no detectable regional differences of 5th and 6th century Slavic [Matasović 2008:44, cf. Holzer 1995] . Afterwards, during the so-called "Common Slavic" period, innovations followed, some of which have missed certain peripheral dialects (e.g. didn't exhibit the "second palatalization of velars" while all the other Slavic dialects did). Linguistic differentiation received impetus from the dispersion of the Slavic peoples over a large territory, but Common Slavic sound changes occurred for at least four or five centuries more. Subsequent migrations of Uralic and Romance speaking peoples created geographic separations between Slavic dialects. The commonly cited last Common Slavic "law" is the loss of weak yers, which occurred somewhere around the tenth or twelvth centuries C.E., and even then not completely in some Slavic dialects. Written documents of the ninth, tenth and eleventh centuries demonstrate some local features. For example, the show a dialect which contains some phonetic and lexical elements peculiar to Slovenian dialects (e.g. , the word "krilatec").

In the second half of the , the dialect spoken north of - in the hinterlands of Macedonia, became the basis for the first written Slavic language, created by the brothers who translated portions of the Bible and other church books. The language they recorded is known as . Old Church Slavonic is not identical to Proto-Slavic, having been recorded at least two centuries after the breakup of Proto-Slavic, and it shows features that clearly distinguish it from Proto-Slavic. However, it is still reasonably close, and the between Old Church Slavonic and other Slavic dialects of those days was proved by Cyril's and Methodius' mission to and Pannonia. There, their early dialect used for the translations was clearly understandable to the local population which spoke an early dialect.

Another change shared with much of the Satem group is the , which had the effect in Slavic languages of shifting *s to *x (possibly with *š as an intermediate stage) after a .Fact|date=August 2007

Once it split off, the proto-Slavic period probably encompassed a period of stability lasting 2000 years with only several centuries of rapid change before the breakup of Slavic linguistic unity that came about due to Slavic migrations in the early sixth century. [harvcoltxt|Van Wijk|1956|pp=21-27] [harvcoltxt|Lehr-Spławiński|1957|pp=255-256] As such, the chronology of changes including the three palatalizations and ending with the change of *ě to *a in certain contexts defines the Common Slavic period.

Other changes that occurred include the merger of aspirated consonants with voiced ones and delabialization of s.

Other important diachronic changes include the merger of long *"ō" and *"ā" into *a, the merger of short *"o" and *"a" into *o, [Harvcoltxt|Lightner|1972|p=130] the disappearance of PIE *"ə" when in a non-initial syllable, and the elimination of the distinction between long and short diphthongs.Fact|date=August 2007 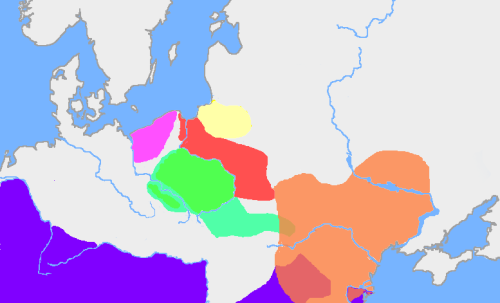 This palatalization goes as follows:Velar consonants become palatalized (*k, *g, *x → *Unicode|ḱ, *Unicode|ǵ, *Unicode|x́) when following a front high vowel (either long or short) and preceding a mid back vowel (either long or short) across a morpheme boundary. An *n or *r between the velar and the high vowel does not prevent this palatalization. Also, the preceding front high vowel must itself follow a consonant. [harvcoltxt|Channon|1971|p=47]

After the progressive palatalization took place, a tendency arose in the Common Slavic period wherein successive segmental phonemes in a syllable assimilated articulatory features (primarily ). [harvcoltxt|Channon|1971|p=11] Another tendency, generally referred to as the "Law of Open Syllables" marks the beginning of the Common Slavic period in which an arrangement of phonemes in a syllable (from lower to higher sonority) led to final consonants being deleted, consonant clusters being simplified (either by deletion or epenthesis), diphthongs being ized, nasal consonants in the syllable coda becoming the nasalization of the preceding vowel (*ę and *Unicode|ǫ), etc. [harvcoltxt|Bethin|1997|p=12] After these changes, a CV syllable structure (that is, one of segments ordered from lower to higher sonority) arose and the syllable became a basic structural unit of the language. Thus syllables (rather than just the consonant or the vowel) were distinguished as either "soft" or "hard;" most consonants having developed palatalized allophones in soft syllables (a situation dubbed "syllable synharmony" or the "syllabeme"). [harvcoltxt|Bethin|1997|p=13]

By this point, Proto-Slavic had the following vowel system:

The Proto-Slavic period ended when syllabic synharmony ended. The first trigger was the change of *ě to *a after palatal consonants and *j, which then created *ča/*ka contrasts. [harvcoltxt|Channon|1971|p=12] . Also, weak s (*ь/ĭ and *ъ/ŭ) were shortened and then elided (see ) creating newly formed closed syllables. [harvcoltxt|Bethin|1997|p=13] By which point, Common Slavic had the following consonants.

For many Common Slavic dialects—including most of West Slavic, all but the northernmost portions of East Slavic, and some western parts of South Slavic— *g lenited from a to a (IPA| [g] → IPA| [ɣ] ). Because this change was not universal and because it did not occur for a number of East Slavic dialects (such as Belarussian and South Russian) until after the application of Havlík's law, Harvcoltxt|Shevelov|1977 calls into question early projections of this change and postulates three independent instigations of lenition, dating the earliest to before 900 AD and the latest to the early thirteenth century. [Harvcoltxt|Shevelov|1977|p=137]

The lexical stock of Proto-Slavic also includes a number of s from the languages of various tribes and peoples that the Proto-Slavic speakers came into contact with. These include mostly Indo-European speakers, chiefly Germanic (Gothic and ), speakers of or some early Romance dialects, and, to a much lesser extent, Iranian (mostly pertaining to religious sphere) and Celtic.

Lots of terms of Greco-Roman cultural provenience have been diffused into Slavic by Gothic mediation, and analysis has shown that Germanic borrowings into Slavic show at least 4 distinct chronological strata, and must have entered Proto-Slavic in a long period.

Of non-Indo-European languages possible connections have been made to various Turkic and Avar, but their reconstruction is very unreliable due to the scarcity of the evidence and the relatively late attestation of both Slavic and Turkic languages.

Older literature, as well as some older etymological dictionaries, often posit some alleged Iranian or Celtic source of all Slavic etymons with unclear etymologies, which in reality have very little linguistic support. Dispute on them ranges from all-inclusive to all-denial.