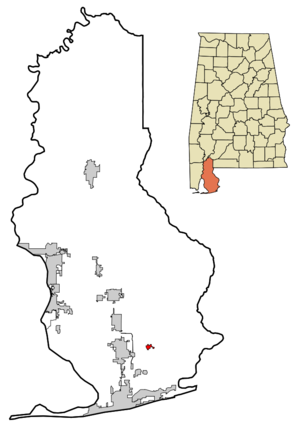 mapsize = 250px
map_caption = Location in Baldwin County and the state of

There were 228 households out of which 30.3% had children under the age of 18 living with them, 45.6% were married couples living together, 17.1% had a female householder with no husband present, and 33.3% were non-families. 29.4% of all households were made up of individuals and 14.9% had someone living alone who was 65 years of age or older. The average household size was 2.42 and the average family size was 2.98.

Elberta is a part of the system.

Elberta has two schools, which are Elberta Elementary School (K-3) and Elberta Middle School (4-8). Elberta students continue to (9-12) in Foley.

Elberta was founded in the early 20th century by a Chicago based land company. The Baldwin County Colonization Company was organized in 1903 and the first settlers arrived in 1904. The community was founded by farmers who had immigrated from Germany to the midwest of America. The land company advertised the area as having rich soil and a climate that allowed year round farming. The first two organized churches were Lutheran (1908) and Catholic (1911). ("Land of Milk and Honey" by John Haupt as told to Nina Keenam, 1990)Fact|date=October 2007

The land company laid out Baldwin County in the manner found in the midwest; that is to say, roads were laid out on section lines that were due north-south and east-west. Property, especially farms, were laid out in squares. With the immigration taking these farmers through Ohio, Indiana, Illinois, and other midwestern states, the early years of the community resembled midwestern farming communities more than those of the deep south. In the 1930's through the 1940's, the town boasted a farmer's hall where dancing and singing were enjoyed, a hotel, a movie theatre, as well as a butcher shop, grocery and drug store. Many of the residents spoke German and St. Mark's Lutheran Church offered German language services until 1976.Fact|date=October 2007

The State Bank of Elberta was incorporated in 1922. The bank was unusual in that it did not close during the Great Depression.Fact|date=October 2007

The town is the home of the Baldwin County Heritage Museum. The museum is located on US Highway 98 east of the town. It features exhibits devoted to the development of Baldwin County. The museum includes a large amount of farm equipment and exhibits of life in farm homes. The old St. Mark's Lutheran Church building was moved to the grounds and restored.Fact|date=October 2007