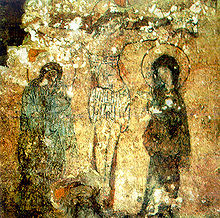 The fresco in the Vilnius Cathedral, dating to the Christianization of Lithuania 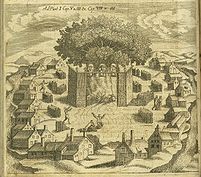 Lithuanians' contacts with the Christian religion had been extensive since the early period of the formation of their state. The first mention of Lithuania in 1009 (in Annals of Quedlinburg) is related to the Roman Catholic missionaries led by Bruno of Querfurt traveling not far from the border of Lithuania, when a few Yotvingian rulers were baptised. However, Lithuanians had more active contacts with the Kievan Rus' and subsequent Eastern Slavic states, which had Eastern Orthodox Christianity as their religion since the Christianization of Kievan Rus'.

The dukes of Lithuania, extending their dominion eastwards, experienced an influence from Slavic states. Their subordinates and the people followed their example, borrowing, for instance, many of the East Slavic versions of Christian names in the 11th - 12th centuries. This borrowing became increasingly widespread among the pagan population in Aukštaitija, though much less in Samogitia. The influence of Orthodox Christianity on pagan Lithuanian culture is evidenced in about one third of present day Lithuanian surnames which are constructed from baptismal names are Old Church Slavonic in origin.[1] In addition, the Lithuanian words for "church", "baptism", "Christmas" and "fast" are classed as 'loanwords from Russian rather than Polish.'[2]

The emergence of a monastic state of the Livonian Order around the Lithuanian borders made it rather urgent to choose a state religion. The first Lithuanian Grand Duke to adopt Western Christianity was Mindaugas, although his nephew and rival Tautvilas had done that earlier, in 1250. The first translations of Catholic prayers from German were made during his reign and have been known since.[3]

The Pope Innocent IV bull regarding Lithuania's placement under the jurisdiction of the Bishop of Rome, Mindaugas' baptism and coronation

In 1249, Tautvilas' ally Daniel of Halych attacked Navahradak, and in 1250, another ally of Tautvilas, the Livonian Order, organized a major raid against Nalšia land and Mindaugas' domains in Lithuania proper. Attacked from the south and north and facing the possibility of unrest elsewhere, Mindaugas was placed in an extremely difficult position, but managed to use the conflicts between the Livonian Order and the Archbishop of Riga in his own interests. In 1250 or 1251, Mindaugas agreed to receive baptism and relinquish control over some lands in western Lithuania, for which he was to receive a crown in return.

Mindaugas and his family were baptised in the Catholic rite in 1250 or 1251. On July 17, 1251 Pope Innocent IV issued a papal bull proclaiming Lithuania as Kingdom and the state was placed under the jurisdiction of the Bishop of Rome. Mindaugas and his wife Morta were crowned at some time during the summer of 1253, and the Kingdom of Lithuania, formally a Christian state, was established. Even after becoming a Catholic, King Mindaugas did not cease sacrificing to his own gods.[4] After Mindaugas repudiated Christianity and expelled all the Christians from Lithuania in 1261, the Grand Duchy of Lithuania lost its status as a Western Christian state. Despite the ruling family's baptism, Lithuania had not become a truly Christian state, since there were no fruitful efforts to convert its population; Lithuanians and Samogitians stood firmly for their ancestral religion. 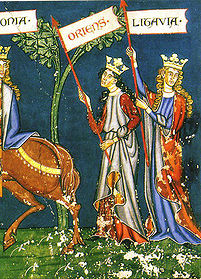 Vacillation between East and West

Mindaugas' successors did not express enough interest in following in his footsteps. There were decades of vacillation between the Latin and the Orthodox options.[5] "For Gediminas and Algirdas, retention of paganism provided a useful diplomatic tool and weapon... that allowed them to use promises of conversion as a means of preserving their power and independence".[6] Grand Duke Algirdas had pursued an option of 'dynamic balance'. Throughout his reign he teased both Avignon and Constantinople with the prospects of a conversion;[7] several unsuccessful attempts were made to negotiate the conversion of Lithuania.[8]

To avoid further clashes with the Teutonic Order, in 1349, Lithuanian co-ruler Kęstutis started the negotiations with Pope Clement VI for the conversion and had been promised royal crowns for himself and his sons. Algirdas willingly remained aside of the business and dealt with the order in the Ruthenian part of the state. The intermediary in the negotiations, Polish King Casimir III, made an unexpected assault on Volhynia and Brest in October 1349 that ruined Kęstutis' plan. During the Polish-Lithuanian war for Volhynia, King Louis I of Hungary offered a peace agreement to Kęstutis on 15 August 1351, according to which Kęstutis obliged himself to accept Christianity and provide the Kingdom of Hungary with military aid, in exchange of the royal crown. Kęstutis confirmed the agreement by performing a pagan ritual [9] to convince the other side. In fact, Kęstutis had no intentions to abide the agreement and ran away on his way to Buda.[10]

By the 14th century, the Grand Duchy of Lithuania had emerged as a successor to Kievan Rus in the western part of its dominions.[11] Although its sovereign was pagan, the majority of the population was Slavic and Orthodox. To legitimize their rule in these areas, the Lithuanian royalty frequently married into the Orthodox Rurikid aristocracy of Eastern Europe. As a result, some Lithuanian rulers were baptised into Eastern Orthodoxy either as children (Švitrigaila) or adults. The first one was Vaišelga, son and heir of Mindaugas, who took monastic vows at an Orthodox monastery in Lavrashev[12] near Novgorodok and later established a convent there.[13]

Christianization by Jogaila and Vytautas

The final attempt to Christianize Lithuania was made by Jogaila. Jogaila's Russian mother urged him to marry Sofia, daughter of Prince Dmitri of Moscow, who required him first to convert to Orthodoxy and to make Lithuania a fief of the Grand Duchy of Moscow.[14] That option, however, was unrealistic and unlikely to halt the crusades against Lithuania by the Teutonic Order. Jogaila chose therefore to accept a Polish proposal to become a Catholic and marry Queen Jadwiga of Poland. On these and other terms, on 14 August, 1385, at the castle of Krėva, Jogaila agreed to adopt Christianity, signing the Act of Krėva.

Jogaila was duly baptised at the Wawel Cathedral in Kraków on 15 February 1386 and became king of Poland. The royal baptism was followed by the conversion of most of Jogaila's court and knights[15], as well as Jogaila's brothers Karigaila, Vygantas, Švitrigaila and cousin Vytautas. Jogaila sent Dobrogost, Bishop of Poznań, as ambassador to Pope Urban VI with a petition for the erection of an episcopal see at Vilnius and the appointment of Andrzej Jastrzębiec to fill it. 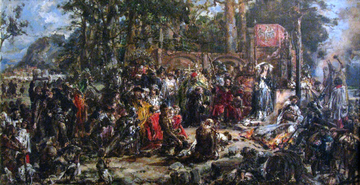 "Baptism of Lithuania" by Jan Matejko

Jogaila returned to Lithuania on February 1387. The baptism of nobles and their peasants was at first carried out in the capital Vilnius and its environs. The nobility and some peasants in Aukštaitija were baptized in spring, followed by the rest of the Lithuanian nobility. The parishes were established in ethnic Lithuania and the new Vilnius Cathedral was built in 1387 in the site of a demolished pagan temple. According to the information of disputed accuracy provided by Jan Długosz, the first parochial churches were built in Lithuanian pagan towns Vilkmergė, Maišiagala, Lyda, Nemenčinė, Medininkai, Krėva, Haina and Abolcy, all belonging to the Jogaila's patrimony. On 19 April 1389, Pope Urban VI recognized the status of Lithuania as a Roman Catholic state.

Samogitia was the last ethnic region of Lithuania to become Christianized in 1413, following the defeat of the Teutonic Order in the Battle of Grunwald and the Peace of Thorn and its subsequent return to the Lithuanian control. In November 1413, Vytautas himself sailed Neman River and Dubysa, reached the environs of Betygala, where he baptised first groups of Samogitians.[16] In 1416, the construction of eight first parochial churches was started. The Diocese of Samogitia was established on 23 October 1417 and Matthias of Trakai became the first Bishop of Samogitia. The cathedral was built in Medininkai around 1464.

Ethnic Lithuanian nobles were the main converts to Catholicism, but paganism remained strong among the peasantry. Pagan customs prevailed for a long time among the common people of Lithuania and were covertly practiced. There had been no prosecution of priests and adherents of the old faith. However, by the 17th century, following the Counter-Reformation ( 1545-1648 AD/CE ), the Roman Catholic faith had essentially taken precedence over earlier pagan beliefs.

The conversion and its political implications had lasting repercussions for the history of Lithuania. As the majority of the population of the Grand Duchy of Lithuania outside Lithuania proper was Orthodox and the elite gradually converted to Roman Catholicism, religious tensions increased. Some of the Orthodox Gediminids left Lithuania for Muscovy, where they gave rise to such families as the Galitzine and the Troubetzkoy. The Orthodox population of present-day Ukraine and eastern Belarus often sympathized with the rulers of Muscovy, who portrayed themselves as the champions of Orthodoxy. These feelings contributed to such reverses as the Battle of Vedrosha, which crippled the Grand Duchy and undermined its position as a dominant power in Eastern Europe.

On the other hand, the conversion to the Roman Catholicism facilitated Lithuania's integration into the cultural sphere of Western Europe and paved the way to the political alliance of Lithuania and Poland, finalized as the Union of Lublin in 1569.