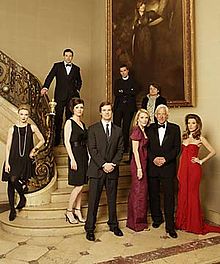 The series revolves around lawyer and family man Nick George, portrayed by Peter Krause. When Nick's father mysteriously dies in a plane crash, he agrees to take his position as the Darling family's lawyer, while trying to discover who committed the murder. The Darlings, the richest family in New York, constantly rely on Nick to solve their problems. Nick struggles to balance his morals and family life while dealing with the demands of the Darlings.

The series revolves around Nick George, whose whole life has been lived in the shadow of the Darling family, but as an adult he's leading a simple life as an idealistic lawyer, until his father's suspicious death. The wealthy Darlings of New York have asked him to take over his father's job as their personal lawyer, but the money that will allow him the freedom to be an altruistic do-gooder is only part of the picture. That same money pulls him into the dubious doings of the Darling clan. However due to the cancellation of the show, the running plot line of the mystery of Dutch George will never be solved as it is revealed in the final episode that he is in fact alive and well and is puppeteering Simon Elder.

The series premiered in the United States on September 26, 2007 on ABC following the Grey's Anatomy spin-off, Private Practice, airing on Wednesday nights at 10:01PM Eastern/9:01PM Central. On November 16, 2007, ABC ordered a full 22-episode season for the show, making it the first show to receive a full season order since the WGA writers' strike began on November 5, 2007.[3] However, in the end, the first season comprised only 10 episodes due to the strike. Dirty Sexy Money: The Complete First Season, a three-disc DVD set including all 10 original episodes and exclusive bonus features including bloopers, audio commentary, deleted scenes, and featurettes, and more, was released on September 16, 2008.[citation needed] The second season premiered on October 1, 2008, ten months after the first season finale.

On November 20, 2008, ABC decided not to order any additional episodes for the 2008–2009 TV season.[4][5] On December 10, 2008 Billy Baldwin appeared on NBC's Today Show asking for fans to support the show by watching the show and by visiting the ABC website and sending nice messages of support to the ABC executives. He said the show is not canceled, but on hiatus until ABC knows how the midseason replacement shows fare. All cast and sets continue to be contracted and on hold for the time being.[6] The last scheduled episode of Dirty Sexy Money aired on December 17, 2008, while four episodes remain unaired in the USA.[7] though they have been broadcast elsewhere.

The series premiered in the UK on March 21, 2008 at 9pm on Channel 4. Dirty Sexy Money was on hiatus due to the WGA writers' strike as of January 9, 2008, the date on which replacement series Cashmere Mafia assumed the time slot. Men in Trees, which has a total of 11 filmed unaired episodes available, assumed the slot on February 27, 2008, potentially for the balance of the spring season.

The show will be broadcast on Turner Network Television in Spain, Studio 23 in Philippines, Dizimax in Turkey and Nelonen in Finland. The series is being broadcast on the satellite/cable channel TNT in Spain since January 2008.[11][12][13][14]

In the United Kingdom, Channel 4 began airing the episodes on Friday, March 21, 2008 at 9:00 pm. Channel 4 began airing the second season on March 8, 2009 on E4 in the 11 o'clock timeslot. Because of its cancellation in the US and low ratings for its first season in the UK there will be no new shows on Channel 4 for the foreseeable future. However, Season 2 commenced airing on E4 in a new time slot. For Season One it aired Tuesday nights at 9.00pm, whereas for Season Two it aired on Sunday nights at 11pm between March 8 and May 31, 2009, including the 4 episodes not yet shown in the US.

In Latin America the series began broadcasting on February 12, 2008 on the AXN channel, season 2 will begin broadcast on February 3, 2009.

In South Africa the series began in December and the full series has been aired on the local satellite or analog channel M-Net. M-Net has broadcasted the remaining episodes of Season 2 which followed on from the Organ Donor episode which aired on January 29, 2009. The series aired on Thursday nights at 8:30p.m. with a repeat on Sundays at 2:00p.m. The season finale has aired on February 5, 2009.

The first season premiered in Greece on Fox life on Wednesday December 3. All 10 episodes aired.

In Israel the series was launched under the name "Money, Darling" on July 7, 2008 on Yes Stars Drama. Season 2 premiered on February 16, 2009, with all 13 episodes confirmed to air consecutively, including those not aired in the US.

In Hong Kong the series was premiered Thursday nights at 10:30 pm on July 17, 2008 on the mainly English free-to-air network TVB Pearl with bilingual audio in both English and Cantonese and widescreen on the same channel in Digital. Series 2 is due to air on March 26, 2009 at the same time-slot. Same as the rest of the world, Hong Kong also aired the unaired episodes before the US on May 28, 2009 starting with the thanksgiving recap episode "The Facts".

In Estonia the show premiered on TV3 in summer 2009.

In Russia the show premiered on 1TV in summer 2008. Two seasons were shown in summer of 2009. The series launched under the name "Dirty Wet Money"

In Serbia the show premiered on cable Fox Life on September 2, 2009. And on Radio Television of Serbia from 2010.

The show is broadcast on Fox Life in Bulgaria too.

In France the show premiered on Canal+ pay TV in 2008 and the second season was aired from 2009 until Feb 11, 2010 when the last episode left French viewers totally desperate to see a 3rd season which as of today will not be shot.

In Slovenia the show's 1st season aired on Mondays on POP TV, It reaired on POP TV's new sister channel POP BRIO in September 2010, after the reruns the 2nd season premiered in the same time slot (Mon-Fri @ 10pm).

In Republic of Macedonia the show aired Sundays at 12:00pm in 2008 on A1 television, and later on Fox Life. 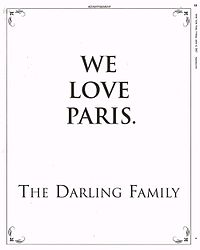 A full page advertisement for the show placed in The New York Post.

Using publicity from Paris Hilton's jail sentence controversy, ABC placed full-page advertisements in the Los Angeles Times and The New York Post that read: "We love Paris. The Darling Family." Later, an airplane towing a banner with the same message flew above the downtown courthouse on June 8 during Hilton's subsequent hearing.[20] The network has also placed fake advertisements on popular gossip blog Perezhilton.com on August 6, 2007 "denouncing" the diva-like behavior of Samaire Armstrong's character, Juliet Darling, among others.[21]

The song Beautiful, Dirty, Rich by singer Lady Gaga was used during advertisements for the show. Clips from the show were also used in an alternate version of the music video

Dirty Sexy Money: The Complete Second Season was released on Region 1 DVD on August 18, 2009. The three-disc collection includes all 13 episodes from the second season.[22] Cover art for the DVD advertises the release as "The Complete and Final Second Season".