Monkton Combe is a village and civil parish in north Somerset, England, 3 miles (4.8 km) south of Bath. The parish, which includes the hamlet of Tucking Mill, has a population of 356.[1]

Monkton Combe was part of the hundred of Bath Forum.[2][3]

According to Rev. John Collinson in his History of Somerset (1791), the town's proper name is Combe Monkton, or really just Combe with the Monkton being attached as an adjective to differentiate it from neighbouring Combe Down and Combe Grove. The village was originally owned by the monks of Bath Abbey, hence Monkton Combe.

It was on the route of the (now disused) Somerset Coal Canal, which ran parallel to Midford Brook.

A significant proportion of the village center is taken up by Monkton Combe School. This is an independent Christian school with 350 pupils — most of whom board.

Monkton Combe railway station featured in the 1953 film The Titfield Thunderbolt, one of the Ealing comedies. The film's plot centred on efforts by villagers to preserve their local railway line. It was on the short-lived branch line of the Bristol and North Somerset Railway which went from Limpley Stoke to Camerton and had closed to passenger traffic in 1925, though the line was used for freight traffic from the Somerset coalfield until 1952.

The parish council has responsibility for local issues, including setting an annual precept (local rate) to cover the council’s operating costs and producing annual accounts for public scrutiny. The parish council evaluates local planning applications and works with the local police, district council officers, and neighbourhood watch groups on matters of crime, security, and traffic. The parish council's role also includes initiating projects for the maintenance and repair of parish facilities, such as the village car park and playgrounds, as well as consulting with the district council on the maintenance, repair, and improvement of highways, drainage, footpaths, public transport, and street cleaning. Conservation matters (including trees and listed buildings) and environmental issues are also of interest to the council. The Village Hall and Village Green are the responsibility of the Village Hall Committee and not of the Parish Council.

The parish falls within the unitary authority of Bath and North East Somerset which was created in 1996, as established by the Local Government Act 1992. It provides a single tier of local government with responsibility for almost all local government functions within its area including local planning and building control, local roads, council housing, environmental health, markets and fairs, refuse collection, recycling, cemeteries, crematoria, leisure services, parks, and tourism. It is also responsible for education, social services, libraries, main roads, public transport, trading standards, waste disposal and strategic planning, although fire, police and ambulance services are provided jointly with other authorities through the Avon Fire and Rescue Service, Avon and Somerset Constabulary and the Great Western Ambulance Service.

Bath and North East Somerset's area covers part of the ceremonial county of Somerset but it is administered independently of the non-metropolitan county. Its administrative headquarters is in Bath. Between 1 April 1974, and 1 April 1996, it was the Wansdyke district and the City of Bath of the county of Avon.[4] Before 1974 that the parish was part of the Bathavon Rural District.[5]

The parish is represented in the House of Commons of the Parliament of the United Kingdom as part of the Bath county constituency which is to become North East Somerset at next general election.[6] It elects one Member of Parliament (MP) by the first past the post system of election. It is also part of the South West England constituency of the European Parliament which elects seven MEPs using the d'Hondt method of party-list proportional representation.

The parish church of St Michael was thought to have been Norman but was razed in the early 19th century. The more or less Early English Period 1865 structure that currently stands with significant 1886 additions was constructed on the site of the 1814 one. It was designed by C. E. Giles, of London, and the builder was Mr. S. G. Mitchell. It is a Grade II listed building.[7]

The churchyard contains the grave of Harry Patch, the last surviving British soldier who served in the First World War. 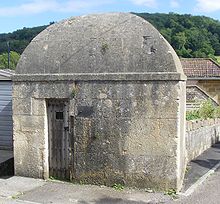 The village has one public house, the Wheelwrights Arms, which was built as a private house in the mid-late 18th century.[8]

There are two mills, neither of which in working order. The Old Mill was built in the early-mid 19th century.[9]

There is also a village lock-up built in the 18th century, probably 1776, which is a Grade II listed building[10] and an Ancient monument.