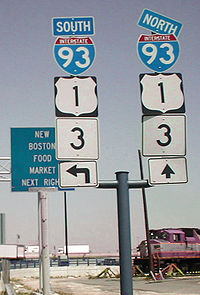 Signs indicating a concurrency of Interstate 93, U.S. Route 1, and Massachusetts Route 3 in Boston

A concurrency, overlap, or coincidence in a road network is an instance of one physical road bearing two or more different highway, motorway, or other route numbers.[1] When it is two freeways that share the same right-of-way, it is sometimes called a common section or commons.[2][3]

Road enthusiasts often use the term multiplex—as well as the more specific duplex and triplex—to refer to such instances although those type are the more common instances.

Concurrency is a relatively common phenomenon: where two routes must pass through a single geological feature, or crowded city streets, it is often both economically and practically advantageous for them both to be accommodated on one road.

Often when two routes with exit numbers overlap (concurrency), one of the routes has its exit numbers dominate over the other and can sometimes result in having two exits of the same number, albeit far from each other along the same highway. An example of this is from the concurrency of I-94 and US 127 near Jackson, Michigan. The concurrent section of freeway has an exit with M-106, which is numbered Exit 139 using I-94's mileage-based numbers. US 127 also has another Exit 139 with the southern end of the US 127 business loop in Mount Pleasant, Michigan. However, there are also instances where the dominant exit number range is far more than the secondary route's highest exit number, for example the concurrency of I-75 and I-85 in Atlanta where I-75 is dominant—the exit numbers range from 242 to 251 while I-85's highest mile marker in Georgia is 179. I-40 in Tennessee (a neighboring state of Georgia), which is also concurrent with I-75, has the instance of its exit numbers in the concurrency range being higher than I-75's highest exit number in the state.

In the United States, concurrencies are simply marked by placing signs for both routes on the same or adjacent posts. Occasionally a state will instead sign the road as "to" the less major route. An example of this is the concurrency between Maryland Route 290 and Maryland Route 291 in Kent County, Maryland, where MD 290, the less major route, is signed as "to" MD 290 along MD 291, the more major route.[4] Several states don't officially have any concurrencies, instead officially ending routes on each side of one.[citation needed] In these states, concurrencies are typically poorly signed. In the mid-20th century, California had numerous concurrencies, but the California Legislature removed most concurrencies in a comprehensive reform of highway numbering in 1964. Another extreme example exists in North Dakota and Minnesota. At Jamestown, North Dakota, U.S. Route 52 begins a concurrency with Interstate 94 for almost 350 miles, ending at St. Paul east of Interstate 35E. Despite being signed on maps, US 52 is not signed until the exit at either end of the concurrency. 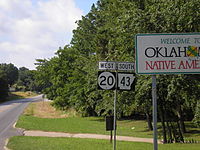 The concurrent eastern and northern termini of OK-20 and AR-43 at MO-43 near Southwest City, Missouri

A particularly unusual concurrency occurs along the Oklahoma–Arkansas state line. At the northern end of this border Oklahoma State Highway 20 runs concurrently with Arkansas Highway 43 and the two roads run north–south along the boundary.

Also, in some cases, two Interstate highways can be concurrent. An example of this is the concurrency of Interstates 20 and 59 between west of Birmingham, Alabama, and east of Meridian, MS. In other cases, instances of arc-shaped bypasses of medium-sized cities can involve concurrencies of Interstate Highways and other route types.

A unique concurrency can be found in Greensboro, North Carolina, where Interstate 40 runs concurrent with Business 85. Business I-85 runs along the former alignment of I-85, which has since been rerouted along the Greensboro Urban Loop. I-40 was also rerouted along this loop in 2008, but reverted to its original routing shortly afterward.

In the United Kingdom, it is common for major through routes to run concurrently with others. Only one road number (typically that of the more heavily used route) is ever shown on road signs however; the other road is either bracketed on the sign, implying that the major route leads to a junction with the minor route (which it will do at the end of the concurrency), or left off altogether. For example, the A82 runs concurrently with the A85 for five miles (8 km) in western Scotland. Each route-confirmation sign-header gives the road number as "A82 (A85)". A counter-example is the concurrency of the A6 and A591 south of Kendal, where, unusually, a sign gives both roads equal status as "A591/A6".

Concurrencies are also found in Canada. In Manitoba, the Trans-Canada Highway from Winnipeg to Portage La Prairie is concurrently signed with Yellowhead Highway. In Ontario, the Queen Elizabeth Way and Highway 403 run concurrently between Burlington and Oakville, forming the province's only concurrency between two 400-series highways. King's Highways in Ontario have many concurrencies, as well as county roads that often share concurrent termini or run concurrently for short sections. These are often not signed as such, with the parent route being signed in place of both.

Secondary highways in Ontario rarely even form a concurrency, even with their own kind. Highway 518 instead parallels the Highway 11 freeway in less than a kilometer of it on Highway 11's former surface road as Ontario's secondary highways generally avoid freeway features, except interchanges at them.

East of Ashdod, Highway 3 and Highway 40, both running north–south, converge and cross each other, running concurrently for 2.5 miles (4.0 km) between Re'em Junction and Malakhi Junction. Southwest of Haifa, the north–south Highway 70 and the east–west Highway 75 run concurrently for 2.5 miles (4.0 km) between Yagur Junction and HaAmakim Junction. 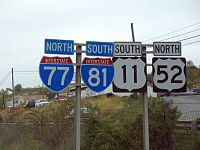 This westbound highway in southwestern Virginia simultaneously carries Interstates 77 and 81 in opposite directions. The wrong-way concurrency is also reflected in U.S. Route 52 and U.S. Route 11, which are concurrent with I-77 and I-81, respectively. 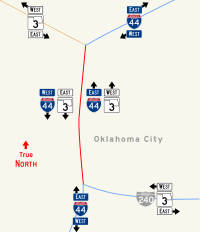 As highways in the United States and Canada are usually signed with a cardinal direction, it is possible for two highways signed with opposite, conflicting directions to be running along the same stretch of physical roadway. The road itself is likely to be actually pointed in a third direction.

For example, near Wytheville, Virginia, there is a concurrency between Interstate 77 (which runs and is signed north-south) and Interstate 81 (which runs primarily northeast-southwest but is also signed north-south). The road itself is oriented east-west and carries the two Interstates signed in opposite directions. So one might simultaneously be on I-77 north and I-81 south, while actually traveling due west. Another well-traveled example is the I-580 and I-80 concurrency in the Bay Area of California, known locally as the Eastshore Freeway, which travels north-south along the shoreline of San Francisco Bay.

An unusual example of a three-directional concurrency occurs near the town of Starks, Illinois. To take advantage of an underpass beneath a railroad, US Route 20, Illinois Route 72 and Illinois Route 47 all converge. The net result is that a driver can be traveling east on US 20, west on IL 72, and south on IL 47 (the actual compass direction) all at the same time.[6]

Some concurrencies have extreme examples such as triple, and even quadruple concurrencies. A triple Interstate concurrency is found north of Madison, WI, with I-39, I-90, and I-94. Also in Madison, there is a quadruple concurrency with four US Highways: US 12, US 14, US 18, and US 151 along the Beltline south of the city. St. Louis, Missouri, has an example of a quadruple Interstate concurrency, with I-44, I-55, I-64, and I-70, plus US 40 running concurrently for a brief run downtown. I-25 is concurrent with US 87 for 400 miles (640 km), running from Raton, New Mexico through the entire state of Colorado and all the way to I-25's northern terminus at I-90 in Buffalo, Wyoming, although US 87 is unsigned for most of this distance. The longest Interstate highway concurrency is I-80 and I-90 for 265 miles (426 km) across Indiana and Ohio. One of the shorter examples is the M-35 (Michigan highway) overlap with CR 492 in Marquette County, Michigan. The two roads overlap for 153 feet (47 m) to cross a rail line, with M-35 yielding to CR 492 traffic in the process.[7] 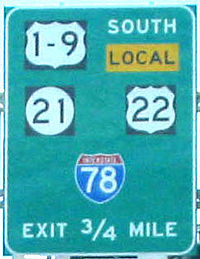 US 1/9 concurrency signed on one shield

Some brief concurrencies in the past have been eliminated by reassigning the designations along the roadways. This can involve scaling back the terminus of a state highway to the end of a concurrent section. At the same time, there could be an extension of another highway designation that is used to replace the newly shortened designation with another one. For instance, M-47 in Michigan used to run concurrently with M-46 for only a few miles. Meanwhile, there was a gap between M-52's northern terminus at M-36 and M-47's southern terminus at I-96 during the 1960s. This gap was closed, connecting M-52 northward to the southern section of M-52. The M-47 designation replaced the M-52 designation northward to the junction with M-46, at the same time M-47 was shortened to end at the other end of the M-46/M-47 concurrency.

Other consolidation schemes involve the use of incorporating 2 single digit numbers into one shield, as along the U.S. Route 1/9 concurrency in northern New Jersey.[10][11] Also, some plans have involved leaving some route types unsigned since they are entirely on a brief stretch of a long-distance highway in a large city, for instance Interstate 296 described above is entirely concurrent with U.S. Route 131, and was left unsigned since it would have been superfluous as a guide for travelers in the area.