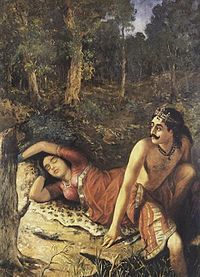 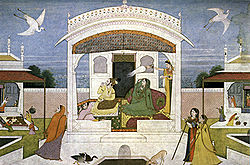 Nala (Sanskrit: नल), a character in Hindu mythology, is the king of Nishadha Kingdom, son of Virasena. Nala is known for his skill with horses and culinary expertise. He marries princess Damayanti, of Vidarbha Kingdom, and their story is told in the Mahabharata. His main weakness is gambling. He is possessed by the God Shani.

Nala, also known as Nala Chakravarti (Nala the Emperor), was chosen by Damayanti as her husband in the swayamvara, a function in which the bride selects her husband from among the invitees, in preference to even the gods who came to marry her.

All separated. After undergoing many hardships, in spite of which Nala never deviated from the path of righteousness, he overcame the influence of Shani Dev and regained his kingdom by defeating Pushkara in a rematch. Nala and Damayanti were reunited and lived happily thereafter.

Shani Dev offered Nala a boon when he left him. Nala sought the boon that whoever read his story would not be unduly affected by the malefic effects of Shani Dev.