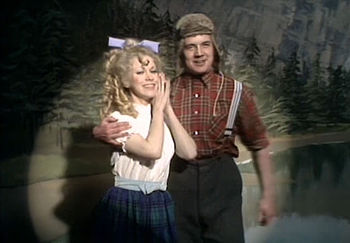 Michael Palin performs The Lumberjack Song, with Connie Booth as his "best girl."

"The Lumberjack Song" is a song by the Monty Python comedy troupe. The song was written by Terry Jones, Michael Palin, and Fred Tomlinson.

It first appeared on the ninth episode of Monty Python's Flying Circus, "The Ant: An Introduction" on BBC1 on 14 December 1969. The song has since been performed in several forms, including film, stage, and LP, each time started from a different skit. At an NPR interview in 2007, Michael Palin stated the scene and the whole song were created in about 15 minutes, concluding a day's work, when the Python crew was stuck and unable to come up with a conclusion to the barbershop sketch that preceded it.

The common theme was of an average man (played by Michael Palin in the original television version, but in later live versions by Eric Idle) who expresses dissatisfaction with his current job (as a barber, weatherman, pet shop owner, etc.) and then announces, "I didn't want to be [the given profession]. I wanted to be... a lumberjack!" He proceeds to talk about the life of a lumberjack ("Leaping from tree to tree"), and lists various trees (e.g. fir, larch, Scots pine). Ripping off his coat to reveal a red flannel shirt, he walks over to a stage with a coniferous forest backdrop, and he begins to sing about the wonders of being a lumberjack in British Columbia. Then, he is unexpectedly backed up by a small choir of male singers, all dressed as Canadian Mounties (several were regular Python performers, while the rest were generally members of an actual singing troupe, such as the Fred Tomlinson Singers in the TV version).

In the original sketch from the programme and film version, the girl is played by Connie Booth, John Cleese's then-wife; in the live version, the girl is played by Python regular Carol Cleveland. In the version from the film And Now For Something Completely Different, it follows on from the "Dead Parrot" sketch with Palin's character leaving the pet shop as Eric Praline asks "I'm sorry, this is irrelevant, isn't it?."

In the song, the Lumberjack recounts his daily tasks and his personal life, such as having buttered scones for tea, and the Mountie chorus repeats his lines in sing-song fashion. However, as the song continues, he increasingly reveals cross-dressing tendencies ("I cut down trees, I skip and jump, I like to press wild flowers, I put on women's clothing, and hang around in bars"), which both distresses the girl and disturbs the confused Mounties, who continue to repeat and chorus his lines, albeit with increasing hesitance. The last straw comes when he mentions that he wears "high heels, suspenders, and a bra," and some of the Mounties stop repeating his lines, and they eventually walk off in disgust. Stunned by the Lumberjack's revelation, the girl cries out "Oh Bernard! And I thought you were so rugged!" (in some versions, she says, "I thought you were so butch!" and slaps him) before running off. In And Now For Something Completely Different, at the end of the song the Lumberjack is pelted with rotten fruit and eggs by the Mounties, who can also be heard shouting insults. Another notable difference is that, in the original version, the Lumberjack wishes he was a girlie "just like my dear mama," whereas subsequent versions replace "mama" with "papa," implying that the lumberjack inherited his tendency for transvestism from his father.

At the end of the version in Flying Circus, a letter written by an enraged viewer (voiced by John Cleese) is shown to complain about the portrayal of lumberjacks in the sketch. The writer claims many of his friends are in the said profession and that "only few of them are transvestites." Before signing off, he reveals his name to be "Brigadier Sir Charles Arthur Strohm (Mrs.)," and in the postscript, he states that he "never kissed the editor of the Radio Times." It then cuts to a vox pop of a screeching Pepperpot (Graham Chapman) complaining about the inappropriateness of "all this sex on the television," exclaiming, "I keep falling off!"

A German version of "The Lumberjack Song" exists for which Palin learned the German text phonetically and the group of Mounties was replaced by a group of Austrian border guards. Instead of one of his parents, the German version credits the lumberjack's "Uncle Walter" as inspiring his passion for cross-dressing; this change was likely done simply for a rhyme with "Büstenhalter", the German translation for "bra", which caps the phrase preceding the "I wish I'd been a girlie..." line.

A version of the song present in this sketch was made in Portugal for a "Millennium" Bank campaign. The lyrics were slightly changed and translated into Portuguese, as the bank at the time was making an offer involving planting trees.

A Spanish language version of the song was created for a theatrical performance in 2004. The Yllana and Imprebis theatrical groups jointly presented a show at Madrid's Teatro Alfil, consisting of sketches adapted from the Monty Python repertoire. Their version of "The Lumberjack Song" was adapted for a Spanish audience so that the singer confessed not to having always wanted to be a lumberjack but having always wanted to join the Guardia Civil, the Spanish gendarmerie. A chorus of uniformed Guardia Civil officers replaced the Mounties from the original television performance.

The song was performed at The Concert for George in November 2002, on the first anniversary of the death of George Harrison. This performance featured featured Palin, Cleveland, Idle, Jones, Terry Gilliam, Neil Innes and special guest Tom Hanks. At the conclusion of the performance, the troupe turned to face a portrait of George Harrison projected on the back of the stage, and saluted him. During his 1974 North American tour, Harrison would play a recording of "The Lumberjack Song" over the arena public address systems prior to taking the stage to perform. In 1975, while Monty Python were performing in New York, Harrison joined them onstage dressed as a Mountie for this song. Harrison also was the producer of the Python film Life of Brian.

In the Shining Time Station Christmas Special, Ringo Starr as Mr. Conductor is dressed in lumberjack attire, he sings the intro to the song, but changes the lyrics to "I'm a lumberjack and I'm all right."

As of 2010[update], the most recent public performance of the song by Python members was as an encore on the oratorio Not the Messiah (He's a Very Naughty Boy) at the Royal Albert Hall on October 23, 2009, with Palin doing the lead performance.[3]

In Spamalot, the song "He is Not Yet Dead (playoff)" is thematically similar. Both feature a masculine man singing about seemingly masculine items, but gradually degrading, and both ending in the singer expressing a wish to wear "suspenders and a bra", and both choruses being disgusted at this point. In Not the Messiah (He's a Very Naughty Boy), the song "A Fair Day's Work" makes references to "The Lumberjack Song", with Eric Idle singing about the masculine virtues of work, but also of dressing in women's clothing to go to "naughty bars". The chorus responds that "That's enough of that, okay. We don't give a duck if you're completely gay." to the tune of the original "Lumberjack" song.

In Ultimate Elektra Issue 2, the song is heard as a TV is flicked through channels.[4]

In episode 10 of season 3 of King of the Hill, "A Firefighting We Will Go", Hank says that he'll sharpen all the axeheads in the fire department. To which Dale replies in the melody of the song, "Hank's a lumberjack and he's okay..."