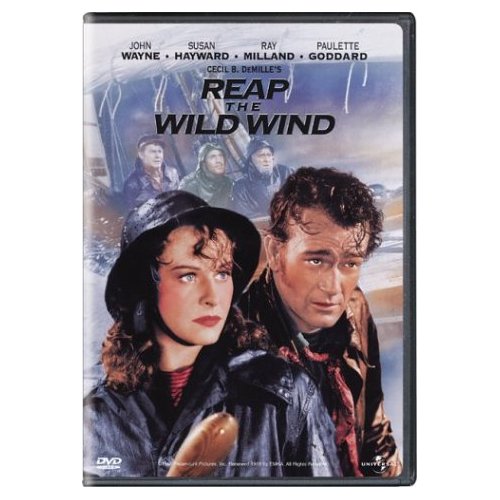 "Reap the Wild Wind" is a serialized story written by in 1940 for "". It was the basis for the 1942 film directed by , his second to be filmed in color. The film, released shortly after the United States' entry into , was a swashbuckling adventure set in the 1840's along the coast. It was wildly successful, and proved to be just the ticket to take the minds of the American movie-going public off of the war for two hours.

While he based his film on Strabel's story, DeMille took liberties with details such as sibling relationships and sub-plots, while staying true to the spirit of the story, which centers on a headstrong, independent woman, played by .

Plot of the Film

As the film opens Loxi Claiborne is running a salvage business started by her deceased father. A hurricane is just passing through the Key West area, leaving behind at least one wreck on the nearby shoals. "The Jubilee" founders and Loxi and other salvagers race to claim the cargo. Not arriving first, Loxi and her crew rescue the captain, Jack Stuart, but do not share in the salvage rights. It appears that the first salvager on the scene, King Cutler, may have actually planned the wreck.

Nursing Jack back to health, Loxi falls in love with him. When she visits Charleston with her cousin Drusilla, Loxi schemes to win a plum captain's position for Jack by seducing Steve Tolliver, who is running the sailing ship line Jack works for. Steve falls for Loxi, and returns with her to Key West.

Drusilla returns home to Havana when Loxi and Steve return to Key West. Steve has come to rid the Keys of pirates like Cutler (and be near Loxi). Cutler in turn arranges to have Steve shanghaied by the crew of a whaler. Loxi hears of the plot and gets Jack to help her save Steve. Later they discover that Steve has Jack's appointment to the steamship "The Southern Cross" with him. Angry over a seemingly underhanded act, Jack meets with Cutler before sailing to Havana to take command of his new ship.

Rumors circulate and prices of the cargo of the "Southern Cross" go up and down wildly, leaving Steve to suspect a wreck is planned. He commandeers the "Claiborne" with Loxi on board and heads to Havana to stop Jack. Loxi disables her ship and they sit becalmed in a fog bank as the "Southern Cross" piles into a reef and sinks. Unknown to Jack, Drusilla had stowed away to be with her lover, King's brother Dan Cutler, and she is drowned.

Jack is put on trial for wrecking his ship and the testimony reveals a woman may have been on board, though none was rescued. To determine if a woman is in the wreck, Steve agrees to dive to the wreck with Jack. While down in the wreck Jack and Steve discover proof that Drusilla was on board and has been drowned. They are attacked by a giant squid. Jack saves Steve's life, and is lost when the "Southern Cross" slips off the underwater shelf into deep water.

Loxi seems to get over the loss of her intended husband pretty quickly and winds up in Charleston with Steve.

The film is unusual among films starring John Wayne. Foremost, it is one of the few films in which he plays a "heavy". He had second thoughts about signing on since he was unsure how his fans would react to him being bested by a "foppish" Ray Milland. Additionally, it is also one of only nine feature films in which Wayne's character is dead by the . The other films are ", , , , , " and "."

This film also marks the final appearance by as an actress in a significant role. The would, however, make s in subsequent films.