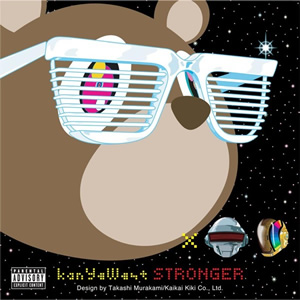 
"Stronger" is the second single from 's album "Graduation". The single was first released digitally on July 31, 2007. "Stronger" features a prominent sample from the song "" by the French house music duo , who received songwriter credit and had their costumes appear in the music video.

A snippet of "Stronger" was released from West's "Can't Tell Me Nothing" mixtape. Shortly after, on , played the full-length song on his . On , , "Stronger" was put onto the Up-Front playlist and was later upgraded to the A-List a month prior to its release.

The single art was released on West's website on , . It was designed by artist . It features a cartoon version of the "Dropout Bear" previously seen on the cover of West's "" and "" albums wearing sunglasses similar to the those West wears in the video, as well as the robotic heads of duo .West performed a partial version of this song live at the held at on , to a crowd of 63,000 people. An estimated 500 million people watched the event in over 140 countries worldwide.

The song was released to iTunes on , and has reached number 1. It debuted on the "Billboard" Hot 100 at number 47 and later peaked at the number 1 position the same week his album Graduation took the number one spot. It is West's third number one in the U.S., following "" and "." The song debuted on the UK singles chart at number three and later became West's first number one single in the UK. Climbing on downloads alone, it surpassed the prior week's number one single, 's "". It has also topped the and New Zealand charts.

performed a of "Stronger" on , which is featured on "". The cover features a slower tempo on guitar and omits the profanity, which was reworded by their lead singer . Leto said that he "hoped that Kanye [was] okay" with the editing. [ [http://www.bbc.co.uk/radio1/jowhiley/galleries/2411/1#/gallery2411 BBC - Radio 1 - Jo Whiley] ]

After getting "jibbed" out of opening the "", West appeared on the "" and expressed his displeasure at the circumstances which lead up to and came during and after the award show. He then performed "Stronger" on the show. He also performed a portion of the song at the in a competition between "The Office" actor similar to "" (which, like the 2007 Emmys, airs on FOX) with host presiding. West sang the last line of the chorus as "That how long I've been on you" which was supposed to be "That how long I've been on ya", losing to Wilson. West jokingly retorted "I never win", poking fun at his losses at award ceremonies and presented the alongside Wilson. [ [http://www.celebrity-gossip.net/celebrities/hollywood/kanye-west-and-rainn-wilsons-emmy-rap-201927/ Kanye West and Rainn Wilson performed the song Stronger at the 2007 Emmy Awards ] ]

Daft Punk themselves made a surprise appearance at the on , to join West in performing a reworked version of the song on stage at the Staples Center in Los Angeles. A press release specified that this was the first televised live performance by Daft Punk in their career. [ [http://www.nme.com/news/daft-punk/34231 Daft Punk Make Surprise Grammy Appearance with Kanye West] nme.com. Retrieved on , .]

"Stronger" features a sample of the popular 2001 song "" by that consists of a vocal performance by the duo. On , , West told on BBC Radio 1 that although he believes "Stronger" is "a great song", it does not compare to the sampled original. Daft Punk were delighted upon first hearing the new song on Power 106 while on a San Francisco flight. As of the duo stated, "Our song had a good sound, but when [the radio DJ] put Kanye's record on, the sound was really f at. It sounds really big."

West collaborated with to rework the percussion for the final cut of the song, which appears on the "Graduation" album. [Shaheem Reid (, ). [http://www.vh1.com/artists/news/1567552/20070821/west_kanye.jhtml? Kanye West Thanks 50 Cent for Much-Hyped Rivalry: 'We Push Each Other'] . . Retrieved on , .] This version contains master use of 's "Cola Bottle Baby",

On , , a previously unreleased version of "Stronger" was revealed. This version features a singular, unused verse from West. The structure is also different, as it features less chords and percussion, with the Daft Punk sample more dominant at the forefront of the production. It is believed that this version was an early draft of the final song. [ [http://www.kanyetalk.com/unlreesed-version-of-stronger-218.html kanYe Live! - The #1 kanYe West Fan Site » Alternate Version of Stronger (Unreleased)] ]

The refrain "That that don't kill me can only make me stronger" stems from 's quote "What does not kill me, makes me stronger" from his "".

The A-Trak remix of the song is used in an advert for the short-lived American TV show .