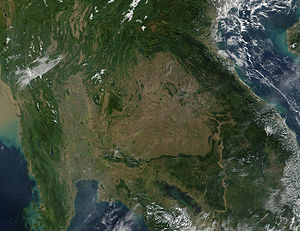 Thailand's borders with Laos and Cambodia are reflected by the brown on the Thai side in this true-colour satellite image, which shows the effects of heavy deforestation in the country.

Between 1945 and 1975 forest cover in Thailand declined from 61% to 34% of the country’s land area. Over the next 11 years, Thailand lost close to 28% of all of its remaining forests. This means that the country lost 3.1% of its forest cover each year over that period. Northern Thailand, the most heavily forested region of the country, was not subject to central government and settlement until the second half of the nineteenth century when British timber firms, notably the Bombay Burma Trading Corporation Ltd and the Borneo Company Ltd, entered into the teak trade in the late 1880s and early 1890. The Royal Forest Department, created in 1896 and staffed by a British forester until 1925, sought to conserve the forests against the worst business practices of British, Thai, and Chinese timber firms who worked in the region.

During the twentieth century, deforestation in Thailand was driven primarily by agricultural expansion, although teak deforestation happened as a direct result of timber-cutting. Much of Thailand’s recent economic improvement can be attributed to increased agricultural production for export. The country was able to increase production by clearing much of their forests and converting them to cropland.

Causes of Deforestation in Thailand

This is most evident in the Northeast region of Thailand. The region is the most densely populated in the nation and has some of the least productive soils for agriculture. As populations increased, the need for food increased, and much forest land had to be cleared to increase food production capacity to meet demand.

The Thai government put controls on the price of rice, which encouraged farmers to explore alternative crops. However, the largest impact agricultural policy had on deforestation was the construction of roads following World War 2. These roads were built to help farmers bring food products from rural areas into the more densely populated urban centers. This encouraged farmers to move away from subsistence farming and begin to farm on a larger scale.

Property rights in Thailand are extremely ambiguous and are often interpreted differently by the various branches of the Thai government. The inability of many Thai citizens to secure property has resulted in them going out into the forests to find space to farm.