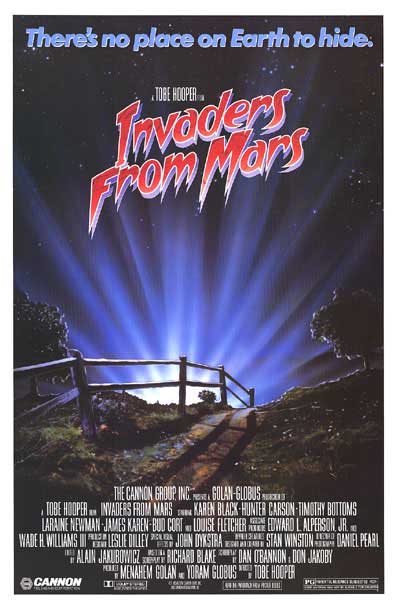 "Invaders from Mars" is a 1986 directed by from a screenplay by and . It is a remake of the 1953 science fiction classic Invaders from Mars, and is a reworking of that film's screenplay by from an original story by . Its production was instigated by [http://www.imdb.com/name/nm0931897/bio Wade Williams] , millionaire exhibitor, science fiction film fan and sometime writer-producer-director, who had reissued the original film in 1978 after purchasing the copyright to the property. Elaborate creature effects were supplied by and ornate visual effects by for the remake.

On the night of a comet storm, young David Gardner () sees an alien spacecraft land in a sand quarry behind his house. This is the beginning of an alien invasion that sees David's parents George () and Ellen (), his teachers and the townspeople slowly assimilated by the alien lifeforms. The only one who believes David is the school nurse (). Together, the two enlist the aid of the U.S. Marines to help save the world.

The remade "Invaders from Mars" was released on June 6, 1986 to disappointing box office, opening in seventh place. In total, it earned a paltry $4,884,663 [ [http://www.boxofficemojo.com/movies/?page=weekend&id=invadersfrommars.htm Invaders From Mars (1986) - Weekend Box Office Results ] ] at the US box office.

* stars alongside her real-life minor son .
* The alien queen prop from the original film can be seen in the school's basement.
* The school is named after , the director of the 1953 version.
* David watches a few moments of "Lifeforce", 's film from the previous year, on television.

* , the young star of the original, appears in the remake as a police officer who initially investigates the landing. While heading up the hill, he says, "I haven't been here since I was a kid."

* The Supreme Martian Intelligence prop from the 1953 film (a head and tentacles inside a transparent sphere)appears in a barrel of Christmas ornaments in the basement of Cameron Menzies High School.
* The mind-control, neck "caterpillars" used by the Martians, make a cameo appearance as specimens in a file cabinet of the classified vault on "".
* The hand-held S.E.T.I. scanning equipment were re-uses of the tricorder props from "".
* The hand-held NASA/military scanning equipment were re-uses of the PKE meter props from "".