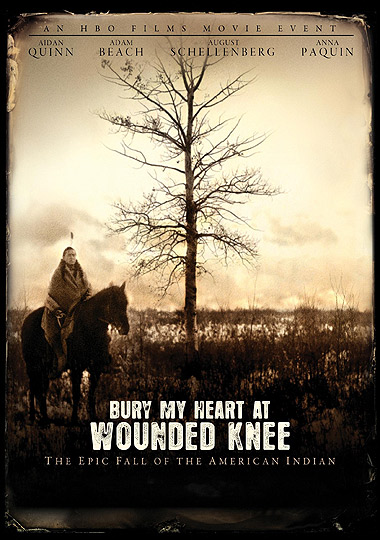 "Bury My Heart at Wounded Knee" is a television film adapted from the book of the same name by Dee Brown. The film was written by , directed by and produced by . The book on which the movie is based is a of Native Americans in the in the late . The title of the film and the book is taken from a line in the poem "American Names." It was shot in ,.

The plot revolves around three main characters: né Ohiyesa (), a young, Dartmouth-educated, doctor held up as living proof of the alleged success of assimilation; (Schellenberg), the proud chief who refuses to submit to U.S. government policies designed to strip his people of their identity, their dignity and their sacred land—the gold-laden Black Hills of the Dakotas; and (Quinn), an architect of government policy on Indian affairs.

While Eastman and patrician schoolteacher Elaine Goodale (Paquin) work to improve life for the Indians on the reservation, Senator Dawes lobbies President (Thompson) for more humane treatment, opposing the bellicose stance of General (Feore). The Dawes Commission develops a proposal to break up the to allow for American demands for land while preserving enough land for the Sioux to live on. The Commission's plan is held up by the stance of Sitting Bull, who has taken a position of leadership among the Sioux as one of the last chiefs to fight for their independence. Dawes, in turn, urges Eastman to help him convince the recalcitrant tribal leaders. After witnessing conditions on the reservation, Eastman refuses.

Hope rises for the Indians in the form of the prophet (Studi) and the —a messianic movement that promises an end of their suffering under the white man. This hope is obliterated after the assassination of Sitting Bull and the massacre of hundreds of Indian men, women and children by the at Creek on , .

The role of Eastman has been exaggerated to allow him to be a witness to multiple historic events. He was not present at nor was he involved in drawing up the Dawes plan to allocate land to Indian families.

The film received 17 nominations at the , [http://www.emmys.org/awards/2007pt/59thnominations.php Retrieved 2007-09-22] earning more nominations than any other nominee. It won 6 Emmy Awards:

It also won the 2007 Broadcast Film Critics Award for Best Picture Made for Television.