Cumulative frequency analysis is done to obtain insight into how often a certain phenomenon (feature) is below a certain value. This may help in describing or explaining a situation in which the phenomenon is involved, or in planning interventions, for example in flood protection.[1] 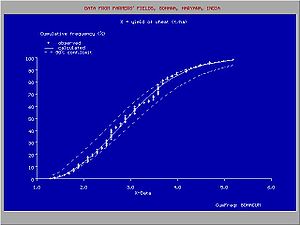 Frequency analysis [2] applies to a record of observed data on a variable phenomenon. The record may be time dependent (e.g. rainfall measured in one spot) or space dependent (e.g. crop yields in an area) or otherwise.

The variable phenomenon is modelled by a random variable X and the parameter pC of interest is the non-exceeding probability:

in which Xr is a given reference value.

The record of observed data consists of a random sample

Briefly the expression can be noted as: FC = M / N.

When Xr=Xmax, where Xmax is the maximum value observed, it is found that Fc=1, because M=N.

The parameter pC is estimated on the basis of the relative cumulative frequency Fc. The estimate is:

The denominator N+1 is introduced instead of N to create the possibility for X to be greater than Xmax as now Pc(Xmax) is less than 1. There exist also other proposals for the denominator (see plotting positions), but they are claimed to be incorrect.[3] 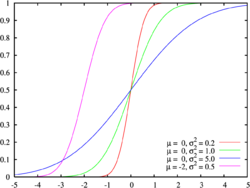 Probability distributions can be fitted by several methods,[2] for example:

Application of both types of methods using for example the

often shows that a number of distributions fit the data well and do not yield significantly different results, while the differences between them may be small compared to the width of the confidence interval.[2] This illustrates that it may be difficult to determine which distribution gives better results. 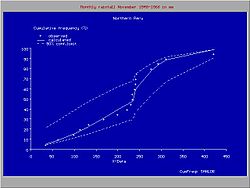 Cumulative frequency distribution with a discontinuity

Sometimes it is possible to fit one type of probability distribution to the lower part of the data range and another type to the higher part, separated by a breakpoint, whereby the overall fit is improved.

The figure gives an example of a useful introduction of a such a discontinuous distribution for rainfall data in northern Peru, where the climate is subject to the behavior Pacific ocean current El Niño. When the Niño extends to the south of Ecuador and enters the ocean along the coast of Peru, the climate in Northern Peru becomes tropical and wet. When the Niño does not reach Peru, the climate is semi−arid. For this reason, the higher rainfalls follow a different frequency distribution than the lower rainfalls.[5]

When a cumulative frequency distribution is derived from a record of data, it can be questioned if it can be used for predictions. For example, given a distribution of river discharges for the years 1950 to 2000, can this distribution be used to predict how often a certain river discharge will be exceeded in the years 2000 to 2050? The answer is yes, provided that the environmental conditions do not change. If the environmental conditions do change, such as alterations in the infrastructure of the river's watershed or in the rainfall pattern due to climatic changes, the prediction on the basis of the historical record is subject to a systematic error. Even when there is no systematic error, there may be a random error, because by chance the observed discharges during 1950 − 2000 may have been higher or lower than normal, while on the other hand the discharges from 2000 to 2050 may by chance be lower or higher than normal. 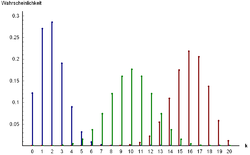 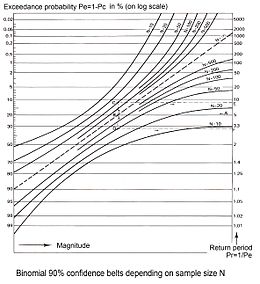 According to the normal theory, the binomial distribution can be approximated and for large N standard deviation Sd can be calculated as follows:

where Pc is the cumulative probability and N is the number of data. It is seen that the standard deviation Sd reduces at an increasing number of observations N.

This is known as Wald interval[6] . However, the binomial distribution is only symmetrical around the mean when Pc = 0.5, but it becomes asymmetrical and more and more skew when Pc approaches 0 or 1. Therefore, by approximation, Pc and 1−Pc can be used as weight factors in the assignation of t.Sd to L and U :

where it can be seen that these expressions for Pc = 0.5 are the same as the previous ones. 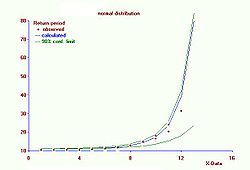 The return period T defined as:

and indicates the expected number of observations that have to be done again to find the value of the variable in study greater than the value used for T.
The upper (TU) and lower (TL) confidence limits of return periods can be found respectively as:

For extreme values of the variable in study, U is close to 1 and small changes in U originate large changes in TU. Hence, the estimated return period of extreme values is subject to a large random error. Moreover, the confidence intervals found hold for a long term prediction. For predictions at a shorter run, the confidence intervals U−L and TU−TL may actually be wider. Together with the limited certainty (less than 100%) used in the t−test, this explains why, for example, a 100−year rainfall might occur twice in 10 years.

The figure shows the variation that may occur when obtaining samples of a variate that follows a certain probability distribution. The data were provided by Benson [1].

The confidence belt around an experimental cumulative frequency or return period curve gives an impression of the region in which the true distribution may be found.

Also, it clarifies that the experimentally found best fitting probability distribution may deviate from the true distribution. 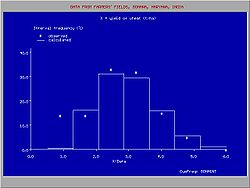 The observed data can be arranged in classes or groups with serial number k. Each group has a lower limit (Lk) and an upper limit (Uk). When the class (k) contains mk data and the total number of data is N, then the relative class or group frequency is found from:

The presentation of all class frequencies gives a frequency distribution or histogram. Histograms, even when made from the same record, are different for different class limits.

The histogram can also be derived from the fitted cumulative probability distribution:

There may be a difference between Fgk and Pgk due to the deviations of the observed data from the fitted distribution (see figure).