Entropia Universe is a massively multiplayer online virtual universe designed by the Swedish software company MindArk, based in Gothenburg. Entropia uses a micropayment business model, in which players may buy in-game currency (PED - Project Entropia Dollars) with real money that can be redeemed back into real world funds at a fixed exchange rate of 10:1.[1] This means that virtual items acquired within Entropia Universe have a real cash value, and a participant may, at any time, initiate a withdrawal of their accumulated PEDs back into real world currencies according to the fixed exchange rate, minus transaction fees, the minimum amount for a withdrawal is 1000 PED. It generally takes several months for a withdrawal to be made, and as a result players often discouraging players from making such withdrawals, and revenue of the business is therefore largely generated from activities within the virtual universe.

The Entropia Universe is a direct continuation of Project Entropia. Strategic partnerships with media companies and financial institutions combined with the addition of new or enhanced developer tools in 2008 are expected to allow for the construction of new planets, to exist within the financial structure of Entropia Universe, for third party content providers to develop and market independently.

Development of Entropia Universe (formerly Project Entropia) was started in Sweden in 1995 by Jan Welter Timkrans and a group of colleagues. During its initial testing phase in 2002 the offices of MindArk were raided by court officials following a complaint by Microsoft that MindArk was using unlicensed software. MindArk has stated that this may have been an attempt by Microsoft to derail the game's development because of its threat to their game Asheron's Call. The game was launched commercially at the start of 2003.[6]

The backstory of Entropia Universe is that of a distant science-fiction future. The specific settings vary a little bit on each planet. On Planet Calypso participants assume the roles of colonists who must develop the untamed planet of Calypso and explore its two continents, Eudoria and Amethera. Populated with fierce and dangerous creatures, the perilous wilderness on Calypso is also rich in minerals and ore, both of which can potentially be a source of income for would-be colonists.

There are two space stations in orbit over Calypso. Their names are - Club NEVERDIE (CND) & Crystal Palace (CP). In order to travel to them, players either need to own a hangar which contains a working spaceship, or alternatively, players can pay other participants acting as pilots to fly them there. As of 2009[update] all pilot services are disabled, so temporary teleports to and from the space stations are being provided for a fee of 40 PED.

The outposts, cities, and auction posts on the planet serve as trading hubs where virtual items such as tools, weapons, and minerals are bought and sold by colonists. The wide range of professions available to colonists makes the accumulation of skills and resources a lively business. The cities also serve as social and cultural connection points for the colonist community. Some colonists on a rare occasion participate in the project only socially without engaging in business, such as beggars and priests of Lootius.

The service can be downloaded and played for free, following an account registration procedure. However, a new player receives only a damaged orange jumpsuit, a pair of grey shoes and a tool for gathering vibrant sweat from creatures. As such, although one is able to participate for free, more involved gameplay is difficult without depositing funds. Players with little or no money are initially limited to the following actions:

Players may purchase items needed to kill Entropia's tougher creatures—which are often likely to yield a higher number of valuable items than their weaker kin—or they can participate in the "Mining" and "Crafting / Manufacturing" professions, which can produce saleable items to fund further gameplay. However, an element of risk is involved in all of these activities, and the expected payback is usually less than the funds required to initially partake in them.

Many players attempt trading as a fun and seemingly attractive method for acquiring PEDs, but has typically low margins.[citation needed] One exception to this is trading so-called "uber" items, which are rare and efficient versions of normal devices. Such items can retail in-game for the equivalent of thousands of US dollars.[citation needed]

Other ways of earning PEDs have included: organizing ticketed events within Entropia, operating a player-owned shop (such as a beauty salon), managing a shopping mall for its taxes, piloting others into space, virtual real estate agency, providing a clothes/furniture coloring/texturising service, or promoting those enterprises.

Before beginning the game, the player's character model can be manipulated in a variety of ways. The model's skin, eye and hair colour can be selected in addition to altering physical dimensions of the body and facial features. After initial creation further physical modifications can only be achieved through the services of other users acting as hairdressers or plastic surgeons, for example.

The cultural city of 'New Oxford' within Entropia Universe offers participants the opportunity to purchase real world items, such as contemporary art and clothing.

Some of the companies that have partnerships to sell real world items within the Entropia Universe include 'Vexed Generation Clothing Ltd' of London, England, '21st Century Fine Art' which has its real world offices in New York, USA. 21st Century Fine Art have also opened a gallery in the heart of 'New Oxford' within the Entropia Universe.[citation needed]

Next Island, one of the EU planets, has licensed Transformers 3 images for virtual goods. http://nextisland.com/planet/2011/press-releases/second-wave-arrival-sandy-lutra-offers-transformers-3/ 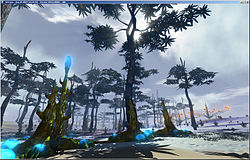 On December 14, 2004, the game creators MindArk announced the conclusion of the first "Treasure Island Sale". This was a virtual island put up for auction. The winning bidder, an avatar named Zachurm "Deathifier" Emegen, paid 265,000 PED (US$26,500) for the island. At the time this was the highest price ever paid for a virtual item. According to the press release, it is "a large island off a newly discovered continent surrounded by deep creature infested waters. The island boasts beautiful beaches ripe for developing beachfront property, an old volcano with rumors of fierce creatures within, the outback is overrun with mutants, and an area with a high concentration of robotic miners guarded by heavily armed assault robots indicates interesting mining opportunities."[8]

On October 24, 2005, a virtual 'Asteroid Space Resort' was bought by Jon "Neverdie" Jacobs for a sum of 1,000,000 PED (US$100,000), greatly surpassing the sale of Treasure Island. Jon Jacobs is also the writer and producer of a song played within the Entropia Universe called "Gamer Chick". The Asteroid was named Club NEVERDIE after Jacobs's own in game Avatar and has made headlines around the world for the high price of the purchase and his own ambitious plans to turn the resort into a venue for "Live Entertainment in Virtual Reality" Although, TO create this Virtual Entertainment for us, he took the huge gamble of mortaging his own house in order to purchase the Space Station. He later reported that his investment had almost tripled in the 2 years following. Some also believe this was a publicity scam made up by MindArk.[9]

On November 9, 2005, the BBC reported that "Deathifier" had recouped his investment in under a year. He made money by selling virtual homes as well as taxing other gamers to hunt or mine on the island. "The money made to date is only a taste of what can be achieved with my virtual island purchase," said Deathifier.[10]

On May 2, 2006, MindArk announced the introduction of an ATM card enabling players to withdraw the real-world currency equivalent of their PED funds directly from any real-world Versatel ATMs. As reported on the BBC newsfeed users could sell virtual items online and then go purchase a dinner for themselves down the street in real life with this cash card technology. It was stated that $165 million had "passed through the game" in 2005 and that this figure was expected to double in 2006.[11]

Mike Everest, a home-schooled high school senior from Durango, Colorado, and his mother earned $35,000 in 2006 by constructing and selling weapons in Entropia. Of this, $12,000 will be used as college funds for his siblings. Everest spent an average of three hours per day playing the game and intended to continue playing to fund his own college education.[12]

On October 17, 2006, MindArk announced that Entropia Universe had achieved the milestone of over 500,000 registered users. "The growth of Entropia Universe is an enormous achievement for us and the members," said Jan Welter, CEO of MindArk, developer of Entropia Universe. "As the world of video games evolves to become more than just a means of two-dimensional entertainment, we are seeing a demand for the integration of real-world features in virtual environments. Individuals are joining the Entropia Universe community to interact, meet new people, learn new ideas, reach entrepreneurial aspirations, create societies and even foster new relationships in everyday reality."[13]

On May 8, 2007, MindArk announced the results of the world's first virtual Banking license auction. These two-year exclusive licenses aim to integrate real world banking systems into Entropia Universe. The virtual Entropia Universe banks will work similarly to real world banks, or pawn shops.[14] Initially, they will be provided with secure systems enabling them to lend money to participants and collect interest, design and name their own virtual bank building(s), and make their own personnel available through avatars. Each winner must add a further US$100,000 as working capital.[15] MindArk CIO Marco Behrmann said, "The five banks will have integrated services within the mechanics of Entropia Universe and will not just be virtual advertising spots."[16] After months of bidding the five licenses sold for a total of US$404,000,[16] to:

On June 15, 2010, parent company MindArk AB released its 2009 annual report. They reported a cash flow of -18.6 Million SEK (-$2.4M). In the report it states that the real life bank they were planning to start is on hold due to a lack of funds. MindArk also says they have a signed letter of intent to sell their original virtual planet, Planet Calypso, for a price of $6,000,000 USD to an unnamed company.[22] This company was later on announced to be SEE Virtual Worlds, which was already a partner with the intention to release at least two planets in the Entropia Universe (Planet Michael, a virtual world celebrating the life of Michael Jackson, and a second planet featuring monsters from Universal[23]) but in June 2011, MindArk released a statement announcing the end of the partnership with SEE altogether.