Daniel Michael DeVito, Jr. (born November 17, 1944), better known as Danny DeVito, is an American actor, comedian, director and producer. He first gained prominence for his portrayal of Louie De Palma on the ABC and NBC television series Taxi (1978–1983), for which he won a Golden Globe and an Emmy.

DeVito and his wife, Rhea Perlman, founded Jersey Films, a production company known for films such as Pulp Fiction, Garden State, and Freedom Writers. DeVito also owns Jersey Television, which produced the Comedy Central series Reno 911!. DeVito and Perlman also starred together in his 1996 film Matilda, based on Roald Dahl's children's novel. He currently stars as Frank Reynolds on the FX sitcom It's Always Sunny in Philadelphia.

He also has a website called "The Blood Factory.com" where he produces very graphic horror short films, many of which he or other members of his family star in.

DeVito was born in Neptune Township, New Jersey, the son of Julia, a homemaker, and Daniel Michael DeVito, Sr., who owned several small businesses, including a dry cleaning store, a dairy outlet, a luncheonette, and a pool hall.[1][2] DeVito is of Italian descent and was raised a Roman Catholic,[3] growing up in Asbury Park.[4] He boarded at Oratory Preparatory School, in Summit, New Jersey, graduating in 1962, and subsequently trained at the American Academy of Dramatic Arts, from which he graduated in 1966.

DeVito played Martini in the 1975 film One Flew Over the Cuckoo's Nest, reprising his role from the 1971 off-Broadway play of the same name. He gained fame in 1978 playing Louie De Palma, the short but domineering dispatcher for the fictional Sunshine Cab Company, on the hit TV show Taxi. After Taxi ended, DeVito began a successful film career, starting with roles in 1983's Terms of Endearment, and as the comic rogue in the romantic adventure Romancing the Stone, starring Michael Douglas and Kathleen Turner, and its 1985 sequel, The Jewel of the Nile. In 1986, DeVito starred in Ruthless People with Bette Midler and Judge Reinhold, and in 1987, he made his feature-directing debut with the dark comedy Throw Momma from the Train, in which he starred with Billy Crystal and Anne Ramsey. Two years later, DeVito reunited with Douglas and Turner in The War of the Roses, which he directed and in which he co-starred. 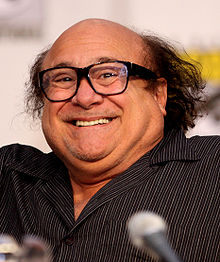 DeVito at the San Diego Comic-Con International in July 2010

Although generally a comic actor, DeVito expanded into dramatic roles with The Rainmaker, Hoffa (1992), which he directed and in which he co-starred with Jack Nicholson, Jack the Bear (1993), L.A. Confidential, The Big Kahuna, and Heist (2001), as a gangster nemesis to Gene Hackman's character.

DeVito has an interest in documentaries: In 2006, he began a partnership with Morgan Freeman's company ClickStar, on which he hosts a documentary channel called Jersey Docs.

One notable feature about DeVito is that he is recognized for his short stature (approximately 5 feet or 150 centimetres).[5]

DeVito has become a major film and television producer. Through Jersey Films, he has produced many films, including Pulp Fiction, Get Shorty, Erin Brockovich (for which he received an Academy Award nomination for Best Picture), Gattaca, and Garden State.

In 1999, DeVito produced and co-starred in Man on the Moon, a film about the unusual life of his former Taxi co-star, Andy Kaufman, who was played in the film by Jim Carrey. DeVito also produced the Comedy Central series Reno 911!, as well as the film spin off Reno 911!: Miami.

DeVito is due to start filming his latest feature Charlotte Doyle early next year. The feature will be shot on location around Ireland and will feature actors Pierce Brosnan and Morgan Freeman[6]

His films often have a bizarre, neo-surrealistic sensibility and gallows humor, though these elements were absent in the straightforward Hoffa biopic. The approach served him well at times, especially in The War of the Roses, a commercial and critical success, as well as Matilda, where it matched the style of Roald Dahl's story of a young girl and a strict teacher; however, his last two films, Death to Smoochy and Duplex, have not been as financially successful.[7]

Television and voice over work 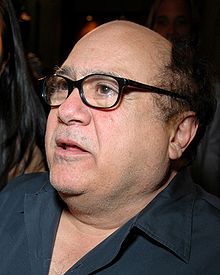 In 1977 DeVito played the role of John John "the apple" in the Starsky and Hutch episode titled "The Collector." In 1986, DeVito directed and starred in an episode of Steven Spielberg's Amazing Stories. In the black comedy episode from season two, titled "The Wedding Ring", DeVito acquires an engagement ring for his wife (played by his real-life wife, actress Rhea Perlman). When the ring is slipped on his wife's finger, she becomes possessed by the ring's former owner, a murderous black widow.

In addition to his Taxi work, DeVito voiced Herb Powell, Homer Simpson's half-brother, on two episodes of The Simpsons. In 1997, he was the voice of the goatman Philoctetes in the film Hercules.

In 1999, DeVito hosted the last Saturday Night Live episode before the year 2000. He earned a 2004 Emmy nomination for Outstanding Guest Actor in a Comedy Series, for an episode of Friends, following four Emmy nominations (including a 1981 win) for Outstanding Supporting Actor in a Comedy, for Taxi. In 2006, DeVito joined the cast of the FX Networks television series It's Always Sunny in Philadelphia as Frank Reynolds.

In 2011, DeVito received a star on the Hollywood Walk of Fame for his work in television.[8]

DeVito is a staunch Democrat, and a supporter of the OneVoice Movement, a non-profit organization that strives to help moderate Israelis and Palestinians to take a more assertive role in resolving the Israeli–Palestinian conflict. He is also a member of the steering committee of the Friends of the Apollo, along with his wife and filmmaker Jonathan Demme.[11]