The NFL Today is also the name of the radio show that corresponds with the television show.

The NFL Today is an American sports series that precedes the American football program The NFL on CBS on CBS Sports. The program usually airs at noon (ET) on Sundays of the National Football League regular season. The hosts and studio analysts on the program comment on the latest NFL events and make their game predictions.

On September 17, 1961, CBS Sports broadcast the first remote 15-minute pre-game show, the first of its kind on network sports television. Pro Football Kickoff (with host Johnny Lujack) originated from NFL stadiums around the country with a comprehensive look at all the day's games. This show was succeeded in 1962 and 1963 by NFL Kickoff (with Kyle Rote hosting).

During the 1964 season, Frank Gifford began hosting NFL Report, which later that season would be retitled The NFL Today. This version of The NFL Today[1] was a 15-minute, regional sports program that presented interviews with National Football League players and coaches, and news and features about the NFL.

In 1967, The NFL Today expanded to a 30-minute format preceding game coverage.

On September 20, 1970, The NFL Today signed industry-pioneering women: Marjorie Margolies, who produced and reported features and actress Carole Howey, who also reported. Margolies would win election to the U.S. House from Pennsylvania in 1992 as Marjorie Margolies-Mezsvinsky.

In 1971, Jack Whitaker and Pat Summerall took over hosting duties on The NFL Today from Frank Gifford, who left CBS to call play-by-play on ABC's Monday Night Football.

In 1973, The NFL Today began originating from CBS' New York studios. It now included reports from stadiums around the country. The program continued to be pre-recorded in advance of game day each week.

In 1974, CBS abandoned the pre-recorded NFL Today show and its quickie wrap-up show, Pro Football Report, for a live, wrap-around style show entitled The NFL on CBS. It would start one-half hour before kickoff of either the singleheader or doubleheader telecast (12:30, 1:30 or 3:30 p.m. Eastern Time).

On September 15, 1974, the revamped progam debuted with a new three-segment format: highlights of the day's games and commentary, special features shot during the week, and a third segment covering the day's sports news, including scores and highlights at halftime. The hosts were Jack Whitaker (brought into the studio after quite a few years at play-by-play) and Lee Leonard. The show broke ground in a number of ways: Being live, showing half-time highlights of other CBS games, and then wrapping up as a post-game show. CBS no longer called its stadium studios or its pre-game set CBS Control, but the CBS Sports Center. There would also no longer be a third member of an on-air crew stationed at CBS Control providing scores, halftime info and - time permitting - post-game interviews, a position often held by Dick Stockton during his early days at the network.

Screenshot of the opening title sequence of The NFL Today seen during the 1983 and 1988 seasons.

The NFL Today title was reinstated in 1975, a year in which it won 13 Emmy Awards, with journalist Brent Musburger and former NFL player Irv Cross, and with former Miss America Phyllis George as one of the reporters. Jimmy Snyder, nicknamed The Greek, joined in 1976. Jack Whitaker also contributed to the program as an occasional reporter and essayist during this period.

By this time, the show began the complex process of producing three separate live pregame, halftime and postgame programs for 1:00 p.m. and 4:00 p.m. games. Also for the first time, signature musical pieces are produced for NFL coverage.

1979 was the first year the Sports Emmy Awards were awarded to sports broadcasts; among the recipients was The NFL Today.

Phyllis George was replaced by Miss Ohio USA 1978 Jayne Kennedy from the 1978 to the 1979 NFL season and left the program after the 1983 season. Jimmy Snyder was dismissed by CBS Sports at the end of the 1987 season, one day after making comments about racial differences among NFL players on Martin Luther King, Jr. Day in 1988.

After the 1989 NFL season, Musburger was abruptly fired following a power shift at CBS on April 1, 1990, while Cross was demoted to the position of game analyst. They were replaced by Greg Gumbel (former WFAN morning host and brother to Bryant Gumbel), famous former Pittsburgh Steelers quarterback Terry Bradshaw and longtime sportswriter Lesley Visser,[2] bringing a female reporter back to The NFL Today for the first time since Phyllis George went on maternity leave during the 1983 season.

After the 1993 season, CBS Sports' contract with the NFL to transmit NFC games ended, and the NFC rights were passed to Fox Sports. The NFL Today had a four-year break along with The NFL on CBS from the 1994 to the 1997 NFL seasons. Gumbel went over to NBC Sports, Bradshaw to Fox NFL Sunday and Visser to Monday Night Football on ABC. Gumbel and Visser would eventually return to CBS.

In 1998, NBC Sports' AFC contract expired, and CBS Sports took over the rights to telecast its games.

The show includes segments like the CarQuest Chalk Talk, in which commentators and program guests discuss team strategies, and Outside the Huddle with computer-animated PUNT TV pregame host Thurston Long, who makes fun of people around the NFL. He is electronically rendered by animators of Scripted Improv Media, Synergistix Media, and of Viacom (VIA), the publicly traded company that owns CBS itself, and with the help of animators and animation software of face2face, a joint venture of Lucent Technologies and other investors.[3] On June 15, 2005, Viacom announced the spin-off its CBS division, which marked the end of Outside the Huddle.

The commentators of The NFL Today also comment on The NFL on CBS on game updates, on the Sprint Halftime Report and on the Subway Postgame Show.

At the start of that same 2003 regular season, CBS Sports introduced the new theme song Posthumus Zone for The NFL Today and for The NFL on CBS. The song was made by Los Angeles electronica group E.S. Posthumus, which is so named because it composes songs that have dead ancient cities as a motif. 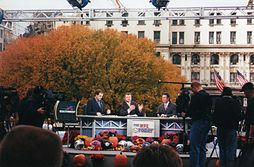 Nowadays, the program usually runs on Sunday at noon, Eastern Time, and lasts one hour. The outdoor studio,[4] which was used during the fall, was set up on Sunday mornings at a plaza in front of the reflecting glass structure of the Apple Store in the General Motors Building, at 767 5th Avenue and 59th Street (see the [5] at Google Maps), next to the southeast corner of Central Park. The winter studio is Studio 43 of the CBS Broadcast Center.[6] However, starting in 2005, The NFL Today was broadcast from Studio 43 all year round. The current studio set for The NFL Today debuted the following season (2006), the same year the show began broadcasting in HD.

Greg Gumbel came back from NBC Sports to work as the lead play-by-play announcer for The NFL on CBS. Jim Nantz became the studio host. Incidentally, during the 1993 season, Jim Nantz filled-in for his predecessor, Greg Gumbel while Gumbel was away covering the American League Championship Series for CBS.

During the 1998 NFL season, when the show returned, newcomer Bonnie Bernstein joined the both the show and the network. She only appeared on the show for one season until moving on to the NFL sidelines for the 1999 season. She would eventually returned to the show in 2004 and 2005.

In the meantime there have been eleven studio analysts on the program. The original lineup consisted of Nantz, Marcus Allen, Brent Jones, and George Seifert and did not last past that season. In fact, only Nantz returned to the pregame the next season, being joined by former CBS College Football Today studio analyst Craig James, former CBS and NBC color commentator Randy Cross and former Fox analyst Jerry Glanville.

During the 2000 NFL season, Lesley Visser returned to CBS Sports/The NFL Today after a 6 year hiatus. Visser served as a feature reporter on the show. Visser briefly left the show in 2004 and 2005 as she left to work as the lead reporter for top NFL games. She would eventually return to the show in 2006 as she still continues that role today.

The pregame was rebooted again after the 2001 season with Dan Marino and Boomer Esiason joining Nantz, 2000 addition Mike Ditka and 2001 addition Deion Sanders. Sanders left the broadcast team after Super Bowl XXXVIII to return to the NFL, playing 2004 with the Baltimore Ravens. Nantz would follow shortly thereafter, being promoted to lead play-by-play broadcaster.

Under Greg Gumbel (the second time)

With Nantz moving to the lead broadcast team alongside Phil Simms, Gumbel returned to the studio to replace him. To replace the departed Sanders, Shannon Sharpe joined the team and has been there ever since.

During the 2004 NFL season, Bonnie Bernstein took over Lesley Visser's spot on the show while taking over Armen Keteyian's spot as the lead sideline reporter for the NFL on CBS teaming up with Nantz and Simms while Keteyian takes over Bernstein's spot on the No. 2 announce team. Those three held their positions for two seasons. This was Bernstein's return to The NFL Today after five seasons on the sidelines while Visser returned to the sidelines after a brief hiatus of four years.

On February 6, 2006, CBS Sports announced the hiring of James Brown, who moved from studio host of Fox NFL Sunday to the host of the The NFL Today. Greg Gumbel moved back to play-by-play, teaming with Dan Dierdorf on the second team replacing Dick Enberg.

During the 2006 NFL season, Lesley Visser returned to The NFL Today after a two year hiatus. Visser once again served as Feature Reporter. She continues to hold that position today. Bonnie Bernstein left the network to pursue other broadcasting opportunities. Aside from Visser returning to the show, Sam Ryan joined CBS Sports/The NFL Today, holds that same position as Visser. Ryan joined the network in June 2006.

During Week 5 of the 2010 regular season, Spero Dedes filled in for Greg Gumbel for the Kansas City Chiefs vs. Indianapolis Colts matchup and Gumbel filled in for an ill James Brown on The NFL Today.

For more details on this topic, see List of Super Bowl broadcasters.

Table of studio hosts and analysts

‹ The template below (CBSNetwork Shows (current and upcoming)) is being considered for deletion. See templates for discussion to help reach a consensus.›
Categories: