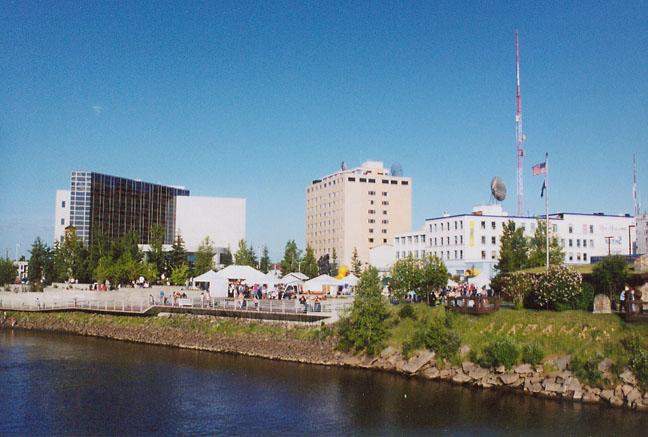 Fairbanks is the largest city in the Interior region of , and second largest in the state behind Anchorage. It is the principal city of the 'Fairbanks, Alaska ' which encompasses all of the Fairbanks North Star Borough and is the northernmost Metropolitan Statistical Area in the United States. According to 2007 Census Bureau estimates, the population of the city is 34,540.

Fairbanks was founded in August 1901 by , who was trying to set up a trading post at Tanacross (where the crossed the ). But the , the steam boat which Barnette was aboard, ran aground and he was deposited seven miles up the . Smoke from the steamer's engines attracted some prospectors, and they met Barnette where he disembarked. The prospectors convinced Barnette to set up his trading post there. [ [http://fairbanks-alaska.com/fairbanks-history.htm "HISTORY OF FAIRBANKS".] ] The city is named after , a Republican senator from and later the 26th vice president, serving in 's second term.

A gold discovery north of town in 1902 provided a swarm of new residents to the newly founded town. Federal judge established government offices in Fairbanks the next year, helping to cement the quickly growing town as an important center of activity in .

Fairbanks is located in the heart of Alaska's Interior, on both shores of the , near its confluence with the in the Tanana Valley. By air, Fairbanks is 45 minutes from Anchorage and 3.5 hours from Seattle. It lies 358 road miles (576 km) or a 6 hour drive north from Anchorage.

According to the , spectacular displays of the ("northern lights") are visible on an average of 200 days a year in the vicinity of Fairbanks. (Jerry Garrett, "The Cold Show in Fairbanks Alaska," , , ).

There were 11,075 households out of which 39.9% had children under the age of 18 living with them, 47.2% were married couples living together, 12.6% had a female householder with no husband present, and 35.1% were non-families. 27.4% of all households were made up of individuals and 6.0% had someone living alone who was 65 years of age or older. The average household size was 2.56 and the average family size was 3.15.

Fairbanks' largest is the "", which also includes a weekly entertainment guide, Latitude 65. A few other periodicals also serve Fairbanks and the Fairbanks North Star Borough: "" and the University of Alaska Fairbanks student newspaper, the "".

Fairbanks' major television affiliates are (ABC)-( retransmission), (FOX), ()-"AlaskaONE" with some -only programming, (), (), and UHF station -(i)-Fairbanks. Cable TV is available from GCI and Denali Television.

The is home to athletics, the Top of the World preseason college basketball tournament, and as of Spring 2008 will be the home location for the , a professional in the .

The and the are summer collegiate teams, playing home games at . The park is home to the annual Midnight Sun game, an annual tradition since 1906, played without artificial lights starting at eleven at night on the summer solstice.

City , , and systems are operated by private entities.

Electricity is provided by . The Chena power site has four steam turbines fueled by and one oil-fueled . Fairbanks currently holds the world record for the largest rechargeable battery, which weighs approximately 1,300 tons. The battery was installed to help bridge the gaps that occur during frequent power outages. The battery will provide power for 7 minutes to about 12,000 homes. [ [http://www.telegraph.co.uk/connected/main.jhtml?xml=/connected/2003/09/03/ecnalaska03.xml World's biggest battery switched on in Alaska - Telegraph ] ]

The University of Alaska Fairbanks operates its own coal-fired generating station on campus, providing electricity and steam heat to university buildings.

Garbage collection services are provided in some areas of the city, although many Fairbanks residents must haul their own garbage to "transfer stations" where trash and garbage are picked up and taken to the dump. Collected refuse is hauled to the Class 1 Borough landfill on South Cushman Street. Garbage services are funded by a tax that is paid by resident property owners regardless of whether or not they are eligible for garbage collection services in their area. operates its own landfill.

The has a student enrollment of slightly over 14,000. There are both public and private schools. Most private schools are run by religious organizations (e.g., private ).

As the regional service and supply center for the , Fairbanks offers a diverse economy, including city, borough, state, and federal government services; and , , , , and regional services. Tourism and mining also comprise a significant part of the economy. Including and personnel, over one third of the employment is in government services. The is also a major employer. Approximately 325,000 visit Fairbanks each summer. The Fort Knox hardrock gold mine produces 1,200 ounces daily with 360 permanent year-round employees. 126 city residents hold permits.

Fairbanks is at the confluence of the , , , and , connecting the Interior to Anchorage, , and the . The to Prudhoe Bay begins about 75 miles (about 120 km) north of town. Goods are transported to Fairbanks by truck, air, and the . Regularly scheduled flights to Alaskan and Lower 48 points are available at the state-owned . An 11,800-foot (3,597 m) asphalt runway, winter ski strip, , and landing strip are available. A public seaplane base is also located on the . In addition, there are several privately owned s and heliports in the vicinity.

Fairbanks was a major shipping center via waterway for the rest of the Interior, but in modern times water transportation is primarily recreational or used for subsistence hunting and fishing access.