In science, cognition refers to mental processes. These processes include attention, remembering, producing and understanding language, solving problems, and making decisions. Cognition is studied in various disciplines such as psychology, philosophy, linguistics, and computer science. Usage of the term varies in different disciplines; for example in psychology and cognitive science, it usually refers to an information processing view of an individual's psychological functions. It is also used in a branch of social psychology called social cognition to explain attitudes, attribution and groups dynamics.

The term cognition (Latin: cognoscere, "to know", "to conceptualize" or "to recognize") refers to a faculty for the processing of information, applying knowledge, and changing preferences. Cognition, or cognitive processes, can be natural or artificial, conscious or unconscious. These processes are analyzed from different perspectives within different contexts, notably in the fields of linguistics, anesthesia, neurology and psychiatry, psychology, philosophy, anthropology, systemics, computer science and creed. Within psychology or philosophy, the concept of cognition is closely related to abstract concepts such as mind, intelligence, cognition is used to refer to the mental functions, mental processes (thoughts) and states of intelligent entities (humans, human organizations, highly autonomous machines and artificial intelligences).

For years, sociologists and psychologists have conducted studies on cognitive development or the construction of human thought or mental processes.

Jean Piaget was one of the more important and influential people in the field of Developmental Psychology. He believed that humans are unique in comparison to animals because we have the ability to do "abstract symbolic reasoning." His work can be compared to Lev Vygotsky, Sigmund Freud, and Erik Erikson who were also great contributors in the field of Developmental Psychology. 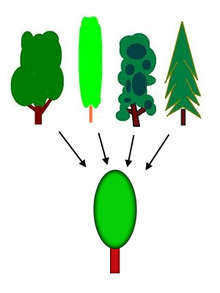 When the mind makes a generalization such as the concept of tree, it extracts similarities from numerous examples; the simplification enables higher-level thinking.

The sort of mental processes described as cognitive are largely influenced by research which has successfully used this paradigm in the past, likely starting with Thomas Aquinas, who divided the study of behavior into two broad categories: cognitive (how we know the world), and affective (feelings and emotions). Consequently, this description tends to apply to processes such as memory, association, concept formation, pattern recognition, language, attention, perception, action, problem solving and mental imagery.[1][2] Traditionally, emotion was not thought of as a cognitive process. This division is now regarded as largely artificial, and much research is currently being undertaken to examine the cognitive psychology of emotion; research also includes one's awareness of their own strategies and methods of cognition called metacognition and includes metamemory.

Empirical research into cognition is usually scientific and quantitative, or involves creating models to describe or explain certain behaviors.

While few people would deny that cognitive processes are a function of the brain, a cognitive theory will not necessarily make reference to the brain or other biological process (compare neurocognitive). It may purely describe behavior in terms of information flow or function. Relatively recent fields of study such as cognitive science and neuropsychology aim to bridge this gap, using cognitive paradigms to understand how the brain implements these information-processing functions (see also cognitive neuroscience), or how pure information-processing systems (e.g., computers) can simulate cognition (see also artificial intelligence). The branch of psychology that studies brain injury to infer normal cognitive function is called cognitive neuropsychology. The links of cognition to evolutionary demands are studied through the investigation of animal cognition. And conversely, evolutionary-based perspectives can inform hypotheses about cognitive functional systems evolutionary psychology.

The theoretical school of thought derived from the cognitive approach is often called cognitivism.

The phenomenal success of the cognitive approach can be seen by its current dominance as the core model in contemporary psychology (usurping behaviorism in the late 1950s). Cognition is severely damaged in dementia.

For every individual, the social context in which he's embedded provides the symbols of his representation and linguistic expression. The human society sets the environment where the newborn will be socialized and develop his cognition. For example, face perception in human babies emerges by the age of two months: young children at a playground or swimming pool develop their social recognition by being exposed to multiple faces and associating the experiences to those faces. Education has the explicit task in society of developing cognition. Choices are made regarding the environment and permitted action that lead to a formed experience.

Language acquisition is an example of an emergent behavior. From a large systemic perspective, cognition is considered closely related to the social and human organization functioning and constrains. For example, the macro-choices made by the teachers influence the micro-choices made by students.

In addition to the topics below, see the List of thinking-related topics