Dagon was originally an Assyro-Babylonian fertility god who evolved into a major northwest Semitic god, reportedly of grain (as symbol of fertility) and fish and/or fishing (as symbol of multiplying). He was worshipped by the early Amorites and by the inhabitants of the cities of Ebla (modern Tell Mardikh, Syria) and Ugarit (modern Ras Shamra, Syria) (which was an ancient city near the Mediterranean containing a large variety of ancient writings and pre-Judeo-Christian shrines). He was also a major member, or perhaps head, of the pantheon of the Biblical Philistines.

His name appears in Hebrew as דגון (in modern transcription Dagon, Tiberian Hebrew Dāḡôn), in Ugaritic as dgn (probably vocalized as Dagnu), and in Akkadian as Dagana, Daguna usually rendered in English translations as Dagan.

In Ugaritic, the root dgn also means grain: in Hebrew dāgān, Samaritan dīgan, is an archaic word for grain.

The Phoenician author Sanchuniathon also says Dagon means siton, that being the Greek word for grain. Sanchuniathon further explains: "And Dagon, after he discovered grain and the plough, was called Zeus Arotrios." The word arotrios means "ploughman", "pertaining to agriculture" (confer ἄροτρον "plow").

It is perhaps related to the Middle Hebrew and Jewish Aramaic word dgnʾ 'be cut open' or to Arabic dagn (دجن) 'rain-(cloud)'.

The theory relating the name to Hebrew dāg/dâg, 'fish', based solely upon a reading of 1 Samuel 5:2–7 is discussed in Fish-god tradition below. According to this etymology: Middle English Dagon < Late Latin (Ec.) Dagon < Late Greek (Ec.) Δάγων < Heb dāgān, "grain (hence the god of agriculture), corn."

The god Dagon first appears in extant records about 2500 BC in the Mari texts and in personal Amorite names in which the gods Ilu (Ēl), Dagan, and Adad are especially common.

At Ebla (Tell Mardikh), from at least 2300 BC, Dagan was the head of the city pantheon comprising some 200 deities and bore the titles BE-DINGIR-DINGIR, "Lord of the gods" and Bekalam, "Lord of the land". His consort was known only as Belatu, "Lady". Both were worshipped in a large temple complex called E-Mul, "House of the Star". One entire quarter of Ebla and one of its gates were named after Dagan. Dagan is called ti-lu ma-tim, "dew of the land" and Be-ka-na-na, possibly "Lord of Canaan". He was called lord of many cities: of Tuttul, Irim, Ma-Ne, Zarad, Uguash, Siwad, and Sipishu.

An interesting early reference to Dagan occurs in a letter to King Zimri-Lim of Mari, 18th century BC, written by Itur-Asduu an official in the court of Mari and governor of Nahur (the Biblical city of Nahor) (ANET, p. 623). It relates a dream of a "man from Shaka" in which Dagan appeared. In the dream, Dagan blamed Zimri-Lim's failure to subdue the King of the Yaminites upon Zimri-Lim's failure to bring a report of his deeds to Dagan in Terqa. Dagan promises that when Zimri-Lim has done so: "I will have the kings of the Yaminites [coo]ked on a fisherman's spit, and I will lay them before you."

In Ugarit around 1300 BC, Dagon had a large temple and was listed third in the pantheon following a father-god and Ēl, and preceding Baīl Ṣapān (that is the god Haddu or Hadad/Adad). Joseph Fontenrose first demonstrated that, whatever their deep origins, at Ugarit Dagon was identified with El,[1] explaining why Dagan, who had an important temple at Ugarit is so neglected in the Ras Shamra mythological texts, where Dagon is mentioned solely in passing as the father of the god Hadad, but Anat, El's daughter, is Baal's sister, and why no temple of El has appeared at Ugarit.

There are differences between the Ugaritic pantheon and that of Phoenicia centuries later: according to the third-hand Greek and Christian reports of Sanchuniathon, the Phoenician mythographer would have Dagon the brother of Ēl/Cronus and like him son of Sky/Uranus and Earth, but not truly Hadad's father. Hadad[2] was begotten by "Sky" on a concubine before Sky was castrated by his son Ēl, whereupon the pregnant concubine was given to Dagon. Accordingly, Dagon in this version is Hadad's half-brother and stepfather. The Byzantine Etymologicon Magnum says that Dagon was Cronus in Phoenicia.[3] Otherwise, with the disappearance of Phoenician literary texts, Dagon has practically no surviving mythology.

Dagan is mentioned occasionally in early Sumerian texts but becomes prominent only in later Akkadian inscriptions as a powerful and warlike protector, sometimes equated with Enlil. Dagan's wife was in some sources the goddess Shala (also named as wife of Adad and sometimes identified with Ninlil). In other texts, his wife is Ishara. In the preface to his famous law code, King Hammurabi calls himself "the subduer of the settlements along the Euphrates with the help of Dagan, his creator". An inscription about an expedition of Naram-Sin to the Cedar Mountain relates (ANET, p. 268): "Naram-Sin slew Arman and Ibla with the 'weapon' of the god Dagan who aggrandizes his kingdom." The stele of Ashurnasirpal II (ANET, p. 558) refers to Ashurnasirpal as the favorite of Anu and of Dagan. In an Assyrian poem, Dagan appears beside Nergal and Misharu as a judge of the dead. A late Babylonian text makes him the underworld prison warder of the seven children of the god Emmesharra.

The Phoenician inscription on the sarcophagus of King Eshmunʿazar of Sidon (5th century BC) relates (ANET, p. 662): "Furthermore, the Lord of Kings gave us Dor and Joppa, the mighty lands of Dagon, which are in the Plain of Sharon, in accordance with the important deeds which I did."

In Biblical texts and commentaries

In the Tanakh (also referred to as the Old Testament or Hebrew Bible), Dagon is particularly the god of the Philistines with temples at Beth-dagon in the tribe of Asher (Joshua 19.27), in Gaza (Judges 16.23, which tells soon after how the temple is destroyed by Samson as his last act). Another temple, in Ashdod was mentioned in 1 Samuel 5.2–7 and again as late as 1 Maccabees 10.83;11.4. King Saul's head was displayed in a temple of Dagon in 1 Chronicles 10:8-10. There was also a second place known as Beth-Dagon in Judah (Joshua 15.41). Josephus (Antiquities 12.8.1; War 1.2.3) mentions a place named Dagon above Jericho. Jerome mentions Caferdago between Diospolis and Jamnia. There is also a modern Beit Dejan south-east of Nablus. Some of these toponyms may have to do with grain rather than the god.

The account in 1 Samuel 5.2–7 relates how the ark of Yahweh was captured by the Philistines and taken to Dagon's temple in Ashdod. The following morning they found the image of Dagon lying prostrate before the ark. They set the image upright, but again on the morning of the following day they found it prostrate before the ark, but this time with head and hands severed, lying on the miptān translated as "threshold" or "podium". The account continues with the puzzling words raq dāgôn nišʾar ʿālāyw, which means literally "only Dagon was left to him." (The Septuagint, Peshitta, and Targums render "Dagon" here as "trunk of Dagon" or "body of Dagon", presumably referring to the lower part of his image.) Thereafter we are told that neither the priests or anyone ever steps on the miptān of Dagon in Ashdod "unto this day". This story is depicted on the frescoes of the Dura-Europos synagogue as the opposite to a depiction of the High Priest Aaron and the Temple of Solomon.

The vita of Porphyry of Gaza, mentions the great god of Gaza, known as Marnas (Aramaic Marnā the "Lord"), who was regarded as the god of rain and grain and invoked against famine. Marna of Gaza appears on coinage of the time of Hadrian.[4] He was identified at Gaza with Cretan Zeus, Zeus Krētagenēs. It is likely that Marnas was the Hellenistic expression of Dagon. His temple, the Marneion—the last surviving great cult center of paganism—was burned by order of the Roman emperor in 402. Treading upon the sanctuary's paving-stones had been forbidden. Christians later used these same to pave the public marketplace. 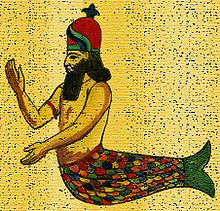 A modern interpretation of Dagon as a "fish-god"

In the eleventh century, Jewish bible commentator Rashi writes of a Biblical tradition that the name Dāgôn is related to Hebrew dāg/dâg 'fish' and that Dagon was imagined in the shape of a fish: compare the Babylonian fish-god Oannes. In the thirteenth century David Kimhi interpreted the odd sentence in 1 Samuel 5.2–7 that "only Dagon was left to him" to mean "only the form of a fish was left", adding: "It is said that Dagon, from his navel down, had the form of a fish (whence his name, Dagon), and from his navel up, the form of a man, as it is said, his two hands were cut off." The Septuagint text of 1 Samuel 5.2–7 says that both the hands and the head of the image of Dagon were broken off.[5]

H. Schmökel asserted in 1928[6] that Dagon was never originally a fish-god, but once he became an important god of those maritime Canaanites, the Phoenicians, the folk-etymological connection with dâg would have ineluctably affected his iconography.[7]

The fish form may be considered as a phallic symbol as seen in the story of the Egyptian grain god Osiris, whose penis was eaten by (conflated with) fish in the Nile after he was attacked by the Typhonic beast Set. Likewise, in the tale depicting the origin of the constellation Capricornus, the Greek god of nature Pan became a fish from the waist down when he jumped into the same river after being attacked by Typhon.

Various 19th century scholars, such as Julius Wellhausen and William Robertson Smith, believed the tradition to have been validated from the occasional occurrence of a merman motif found in Assyrian and Phoenician art, including coins from Ashdod and Arvad.

John Milton uses the tradition in his Paradise Lost Book 1:

... Next came one
Who mourned in earnest, when the captive ark
Maimed his brute image, head and hands lopt off,
In his own temple, on the grunsel-edge,
Where he fell flat and shamed his worshippers:
Dagon his name, sea-monster, upward man
And downward fish; yet had his temple high
Reared in Azotus, dreaded through the coast
Of Palestine, in Gath and Ascalon,
And Accaron and Gaza's frontier bounds.