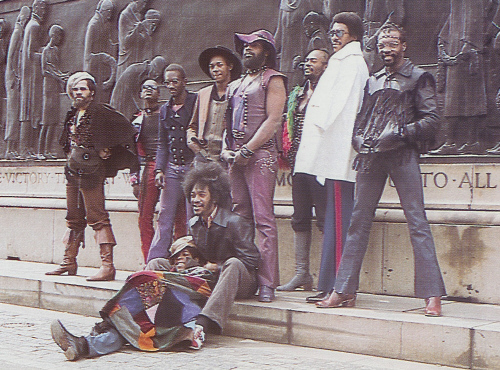 Funkadelic was an band most prominent during the 1970s. It and its sister act Parliament, both led by George Clinton, began the funk music culture of that decade.

The group that would become Funkadelic was originally formed by George Clinton in 1964, as the unnamed musical backing for his group while on tour. The band originally consisted of musicians , , and plus the five members of the Parliaments on vocals. Boyce, Boyce, and Booth enlisted in the Army in 1966, and Clinton recruited bassist and guitarist in 1967, then also added guitarist and drummer . The band name "Funkadelic" was coined by Nelson after the band relocated to Detroit. By 1968, because of a dispute with , the record company that owned the name "The Parliaments", the ensemble began playing under the name Funkadelic.

As Funkadelic, the group signed to Westbound in 1968. Around this time, the group's music evolved from soul and doo wop into a harder guitar-driven mix of psychedelic rock, soul and funk, much influenced by the popular musical (and political) movements of the time. and were major inspirations. This style later evolved into a tighter guitar-based funk (circa 1971-75), which subsequently, during the height of success (circa 1976-81), added elements of disco and electronic music.

The group's self-titled debut album, "Funkadelic", was released in 1970. The credits listed organist plus Clinton, Fulwood, Hazel, Nelson, and Ross. The recording also included the rest of the Parliaments singers (still uncredited due to contractual concerns), several uncredited session musicians then employed by , as well as (of Rare Earth) and future P-Funk mainstay .

Bernie Worrell was officially credited starting with Funkadelic's second album, 1970's "", thus beginning a long working relationship between Worrell and Clinton. The album "" followed in 1971. The first three Funkadelic albums displayed strong psychedelic influences (not least in terms of production) and limited commercial potential, despite containing many songs that stayed in the band's setlist for several years and would influence many future funk, rock, and hip hop artists.

After the release of "", the Funkadelic lineup was expanded greatly. was unavailable after experiencing either a bad trip or a speed overdose, while and quit due to financial concerns. From this point, many more musicians and singers would be added during Funkadelic's (and Parliament's) history, including the recruitment of several members of the famous James Brown backing band The JB's in 1972 - most notably and the . Bootsy and his brother were recruited by Clinton to replace the departed Nelson and Hazel. Bootsy in particular become a major contributor to the sound. In 1972, this new line-up released the politically-charged double album "". The lineup stabilized a bit with the album "" in 1973, featuring major contributions from recently added singer-guitarist . After first leaving the band, Eddie Hazel spent a year in jail for drug possession and assault, then returned to make major contributions to the 1974 album "". Hazel only contributed to P-Funk sporadically thereafter.

George Clinton revived Parliament in 1974 and signed that act to . Parliament and Funkadelic featured mostly the same stable of personnel but operated concurrently under two names. At first, Parliament was designated as a more mainstream funk ensemble dominated by soulful vocals and horn arrangements, while Funkadelic was designated as a more experimental and freestyle guitar-based funk band. The ensemble usually toured under the combined name or simply P-Funk (which also became the catch-all term for George Clinton's rapidly growing stable of funk artists).

In 1975 , a teen guitar prodigy, replaced Hazel as the premier lead guitarist in Parliament-Funkadelic, and was a major contributor to that year's Funkadelic album "". Funkadelic left in 1976 and moved to . Their first album for Warner was "" in 1976. Just before leaving Westbound, Clinton provided that label with a collection of recently recorded outtakes, which Westbound released as the album "". That album did significantly better commercially than "Hardcore Jollies" and included "Undisco Kidd", an R&B Top 30 single. In 1977, Westbound capitalized further by releasing the anthology "The Best of the Early Years".

As Parliament began achieving significant mainstream success in the 1975-1978 period, Funkadelic recorded and released its most successful and influential album, "" in 1978, adding former lead and keyboardist and reflecting a more melodic dance-based sound. The title track spent six weeks at #1 on the R&B charts, around the time that Parliament was enjoying the #1 R&B singles "Flash Light" and "." "" in 1979 continued Funkadelic's new more electronic sound production. The album contains a fifteen-minute version of "", an edited version of which topped the R&B charts, featuring former lead singer . The final official Funkadelic album, "", was released in 1981. The release was originally a double-album project, but it was reduced to a single disc under pressure from Warner Brothers. Some of the deleted tracks would appear on future P-Funk releases, most notably the 1982 hit single "" which appeared on the first George Clinton solo album.

Meanwhile, the album "" (re-issued on CD as "Who's a Funkadelic") was released under the name Funkadelic in 1981. The album was recorded by former Funkadelic members and original Parliaments , , and , who had left P-Funk in 1977 after disagreements with George Clinton's management practices. This LP contains the track called "You'll Like it too", which came a very popular source for the community in the 80's. Another rebellious former band member, drummer , released the album "Mutiny on the Mamaship", by his new band Mutiny. Even Clinton himself found this to be a good album despite containing lyrics that mocked him and his management of the P-Funk enterprise.

In the early 1980s, with legal difficulties arising from the multiple names used by multiple groups, as well as a shakeup at Parliament's record label, George Clinton dissolved Parliament and Funkadelic as recording and touring entities. However, many of the musicians in later versions of the two groups remained employed by Clinton. Clinton continued to release new albums regularly, sometimes under his own name and sometimes under the name George Clinton & the P-Funk All-Stars. In the mid-1980s, the last Funkadelic album "" was recorded by Clinton with P-Funk personnel and many electronic devices. The album was rejected by its record label and did not see official release in America until it appeared as a reissue in 2007. It features a cover of "Sunshine Of Your Love" by Cream. The album did not receive any publicity, but still received favorable reviews.

Clinton continued his P-Funk collective in the 1990s and 2000s, with a revolving stable of musicians, some of whom remain from the classic lineups of Funkadelic and Parliament. The rock-oriented sound of Funkadelic has diminished, as Clinton has moved towards more of an R&B and hip hop sound.

Filmmaker Yvonne Smith of -based Brazen Hussy productions produced "Parliament-Funkadelic: One Nation Under a Groove," a full-length documentary about the groundbreaking group, which aired on in 2005. [ [http://www.pbs.org/independentlens/parliamentfunkadelic/film.html Independent Lens . Parliament Funkadelic: One Nation Under a Groove . The Film | PBS ] ] As of 2008, Clinton is at work on a new Funkadelic album for his new record label.