Rosneft
Not to be confused with Russneft.

Rosneft conducts oil and gas exploration and production activities on Sakhalin island, Siberia, Timan-Pechora field and southern Russia, including Chechnya. It owns and operates two refineries. The refinery in Tuapse, on the Black Sea, focuses on refining high-gravity oil from western Siberia. Another plant in Komsomolsk-on-Amur is the easternmost refinery in Russia. The Komsomolsk Refinery benefits from its technological integration with Nakhodkanefteprodukt, while the Tuapse Refinery is noted for its favorable location on the Black Sea coast and is part of an integrated complex with Tuapsenefteprodukt. Rosneft operates shipping (Arkhangelsknefteprodukt), pipeline and marketing companies. As of 29 December 2006, the company’s market value was US$83.908 billion.[1] Rosneft net income fell 20% for the first quarter of 2009 from $2.56 billion to $2.06 billion due to the weakness of oil price[2] Rosneft is 75.16% owned by the Russian state, while around 15% of the shares are in free float.[3]

Rosneft was established in 1993 as a Unitary enterprise on the basis of assets previously held by Rosneftegaz, the successor to the Soviet Union's Ministry of Oil and Gas. During early 90s almost all Russian local oil companies and refineries were extracted from Rosneft to form ten integrated companies (later their number was halved as a result of acquisitions). On 29 September 1995, a Government of Russia Resolution № 971 transformed Rosneft into an open joint stock company. In October 1998, the Russian government appointed Sergey Bogdanchikov as president. The company had only two obsolete refineries and several low-productive and poorly managed oil-producing assets. Several plans for company's privatization were composed in late 90s but due to struggle of equal influential pretenders they were never fulfilled.

Rosneft increased oil output from 98.56 million bbl (13.47 million tonnes) in 2000 to 148.26 million bbl (20.27 million tonnes) in 2004. In 2001, the company became Russia’s official representative on projects with production sharing agreements (PSA). In 2003, it began production at the Aday block near the Caspian Sea in Western Kazakhstan. In 2004 the company agreed to merge with Gazprom. The merger plans were discarded in May 2005, allegedly because Bogdanchikov did not wish to take a lesser role in the integrated company answering to Gazprom CEO Alexei Miller. 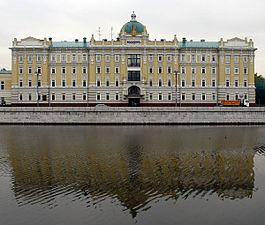 Since 2004, a series of government auctions have been organized to sell Yukos assets, the majority being won by Rosneft. On 22 December 2004, Rosneft purchased a little known Russian oil company called Baikal Finance Group. Three days earlier, the previously unheard-of Baikal Group had purchased former Yukos subsidiary Yuganskneftegaz (Yugansk) at a state-run auction, ostensibly to satisfy tax debts. This was viewed by many as a de-facto nationalization of Yugansk, and was denounced by Andrei Illarionov, then a senior Putin economic advisor, as “the scam of the year.”[4] However, despite criticisms, the addition of Yungansk resulted in Rosneft becoming Russia’s second-largest producer of oil and gas by 2005, with an average output of 1.69 million bpd. In June 2007, Rosneft paid $731 million for Yukos transportation assets.[5] Although the Yukos acquisition increased debt considerably, the company still plans to triple refining capacity and expand into China. Bogdanchikov has said the company plans to reduce debt to 30% of total assets by 2010.[6] Rosneft wants to extract 140 million tonnes of oil by 2012 and become a global top three energy company. The group also hopes to increase production from 80 million tonnes in 2006 to 103-million-tonne by the end of 2007.[7]

On 14 July 2006, Rosneft conducted one of the largest initial public offerings (IPO) in financial history after placing nearly 15% of its shares on the Russian Trading System (RTS) and the London Stock Exchange (LSE). The offering raised USD 10.7 billion. Shares were priced at $7.55, near the upper end of the range forecast when the IPO was announced, resulting in Rosneft being valued at $79.8 billion. Rosneft achieved its objective largely by arranging bilateral deals with strategic investors, such as British Petroleum (BP), Petronas and CNPC, which bought almost $2.6 billion worth of shares during the IPO. Three oligarchs invested over $1 billion each on the LSE (Roman Abramovich, Vladimir Lisin, and Oleg Deripaska. Critics of the deal included financier George Soros, who called on investors to boycott it on ethical grounds, and Andrei Illarionov, who called the deal illegal and "a crime against the Russian people," because none of the proceeds will go into the state budget. The British Financial Services Authority authorised the flotation of Rosneft shares despite an appeal from Yukos, which claimed that allowing the Rosneft IPO would be tantamount to facilitating the sale of stolen goods.[8] 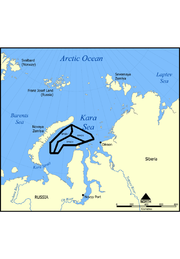 Location of the EPNZ-1, EPNZ-2 and EPNZ-3 oil and gas areas in the Kara Sea

On 15 January 2011, Rosneft and British Petroleum (BP) announced a deal to develop the East-Prinovozemelsky field on the Russian arctic shelf between the Yamal Peninsula and Novaya Zemlya island.[9] As part of the deal Rosneft was to receive 5% of BP's shares (worth approximately $7.8 billion, as of January 2011) and BP would get approximately 9.5% of Rosneft's shares in exchange.[10] According to the deal, the two companies would also create an Arctic technology centre in Russia to develop technologies and engineering practices for safe arctic hydrocarbons extraction.[11]

The deal was blocked by BP's subsidiary TNK-BP, a joint venture with a group of Russian billionaires known as AAR, due to a dispute over Russian exploration rights between the two companies, and was nullified.[12] On 30 August 2011, Rosneft announced that instead of BP the partner for EPNZ-1, EPNZ-2 and EPNZ-3 in the Kara Sea will be ExxonMobil. In exchange, subject to approval by U.S. regulators, in addition to a share in oil production in Russian fields, Rosnoft was granted participation in U.S. fields in Texas and the Gulf of Mexico.[13][14]

On 27 January 2011, Rosneft and the American company ExxonMobil signed a deal to establish a joint venture for the purpose of prospecting and extracting oil from the Tuapse field deepwater area on the Black Sea shelf, near the coast of the Krasnodar Krai. The value of the deal is unknown, but ExxonMobil is expected to invest $1 billion in the project. The venture will be shared 50-50 between the companies during prospecting phase, and 2/3 - 1/3 in Rosneft's favour during the extraction phase. The Tuapse Trough is estimated to contain 7.2 billion barrels of oil equivalent. The first well could be drilled in 2012.[15] The joint venture will benefit from ExxonMobil's innovative technology and Rosneft's resources and experience in the region, enabling production from the difficult-to-develop offshore area.[16][15] The deal also contains options for additional cooperation, such as extended exploration and production, deliveries to Rosneft's oil refinery in Tuapse, development of transport infrastructure and research on offshore oil production technologies.[17] According to analysts, offshore areas are central to Rosneft's expansionist plans, and the company is looking for foreign cooperation to bring in new technology and share risks.[15] 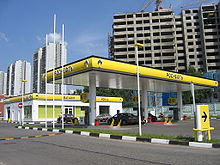 As of December 2006, the Rosneft Board of Directors consists of:

As of December 2006, the Rosneft Management Committee consists of: