The Ulster Museum, located in the Botanic Gardens in Belfast, has around 8,000 square metres of public display space, featuring material from the collections of fine art and applied art, archaeology, ethnography, treasures from the Spanish Armada, local history, numismatics, industrial archaeology, botany, zoology and geology. It is the largest museum in Northern Ireland,[3] and one of the components of National Museums Northern Ireland.[4]

The Ulster Museum was closed for nearly three years (2006 to October 2009) while it was under renovation. It re-opened to the public on 22 October 2009, on its 80th anniversary.[5] The renovation work was supported by the National Lottery and the Northern Ireland Executive's Department of Culture, Arts and Leisure.

In 1962, courtesy of the Museum Act (Northern Ireland) 1961, it was renamed as the Ulster Museum and was formally recognised as a national museum. A major extension constructed by McLaughlin & Harvey Ltd to designs by Francis Pym was begun in 1962 and opened in 1964. It is in the Brutalist style, praised by David Evans for the "almost barbaric power of its great cubic projections and cantilevers brooding over the conifers of the botanic gardens like a mastodon".[7]

Since the 1940s, the Ulster Museum has built up very good collection of art by modern Irish, and particularly Ulster-based, artists.

In 1998, the Ulster Museum, which includes Armagh County Museum, merged with the Ulster Folk and Transport Museum and the Ulster-American Folk Park to form the National Museums and Galleries of Northern Ireland.

In July 2005, a £17m refurbishment of the museum was announced, with funding coming from the Heritage Lottery Fund and the Department of Culture, Arts and Leisure (DCAL, usually pronounced as 'Dee-Kal').[8] In October 2006 the museum closed its doors until 2009, to allow for the refurbishment work.[9] Illustrations of historic interest will be found as nos 183 and 237 in Larmour,P. 1987.[10] The redevelopment proposals have drawn criticism from many significant figures in the architectural community, who feel the character of the Modernist extension will be irrevocably lost.[citation needed] The reopening has seen the introduction of Monday closure, which has received criticism from the public and in the press.(http://news.bbc.co.uk/1/hi/northern_ireland/8327142.stm) All NMNI sites are to close on Mondays. This decision is being reviewed by DCAL. 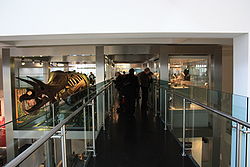 The Ulster Museum contains important collections of Irish birds, mammals, insects, molluscs, marine invertebrates, flowering plants, algae and lichens, as well as an archive of books and manuscripts relating to Irish natural history. The museum also maintains a natural history website named Habitas.[11] In the late 1980s and the early 1990s it had a permanent exhibition on dinosaurs which has since been scaled back considerably. There is also a collection of rocks, minerals and fossils. 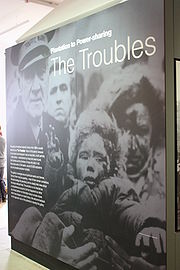 The herbarium in the Ulster Museum (BEL),[13] is based on specimens from Belfast Natural History and Philosophical Society (founded in 1821); the Belfast Naturalists' Field Club (founded in 1863); the Belfast Museum and Art Gallery (formed 1905) and the herbarium (BFT) of the Botany Departmeny of Queen's University, Belfast acquired in 1968. In total the number of specimens is more than 100,000. Although specimens from Northern Ireland are well represented, specimens from elsewhere in the world have been acquired by donation, exchange and purchase. All branches of the world's flora are represented: algae, lichens, fungi, mosses and pteridophytes (ferns), conifers and angiosperms. Little information about the Irish flora before 1830 is available, the oldest specimen in the Ulster Museum is an alga: Batrachospermum moniliforme (BEL: F41) collected in 1798 by John Templeton, other specimens of Batrachospermum, originally incorrectly identified as Thorea ramoissima were collected by John Templeton in 1815 from a "boghole" in Co. Donegal (BEL:F42 - F47). It was originally published by Harvey in 1841.[14]

The collection contains works by:

The museum acquired Armada artefacts from the Galleass Girona (ship) in 1971.