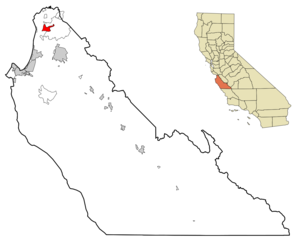 mapsize = 250x200px
map_caption = Location in Monterey County and the state of

Elkhorn is a (CDP) in Monterey County, , . The population of Elkhorn was 1,591 at the 2000 census. Elkhorn was named after the elk in the area that have since gone extinct. Because Elkhorn is not a city, not all residents call the place they live Elkhorn. Some residents refer to Elkhorn as Castroville on mailed documents because Elkhorn shares a zip code with Castroville. Other residents refer to Elkhorn as north Monterey County of which Elkhorn is a part. The is a local point of interest.

There were 523 households out of which 35.4% had children under the age of 18 living with them, 65.8% were married couples living together, 8.8% had a female householder with no husband present, and 21.4% were non-families. 14.1% of all households were made up of individuals and 3.3% had someone living alone who was 65 years of age or older. The average household size was 3.04 and the average family size was 3.34.

Agricultural is a major part of Elkhorn's small economy. Strawberries and artichokes are key crops. Most Elkhorn residents work in the surrounding areas of Castroville, Prunedale, Moss Landing, and the nearby larger towns of Watsonville, Salinas, and Monterey. Elkhorn shares a zip code with nearby Castroville. Elkhorn has limited business and retail services. The only retail service in Elkhorn is the Elkhorn Superette which is located on the west side of Elkhorn Road, just north of Bayview Road. The nearest business and retail center is located about three miles (5 km) away in Castroville. However, many Elkhorn residents travel about 20 minutes to the nearby cities for greater retail and service needs such as department stores, movie theaters, and health services which are not located in Castroville.

Elkhorn Elementary School is the only school located in Elkhorn, and it serves the surrounding K-6 student population. Elkhorn Elementary is the polling site for Elkhorn voters. Middle school students in grades 7 and 8 currently attend and high school students in grades 9-12 attend , both located in Castroville. All local public schools are part of the [http://www.nmcusd.org/] .